Would It Help?: When to Talk Politics at Work 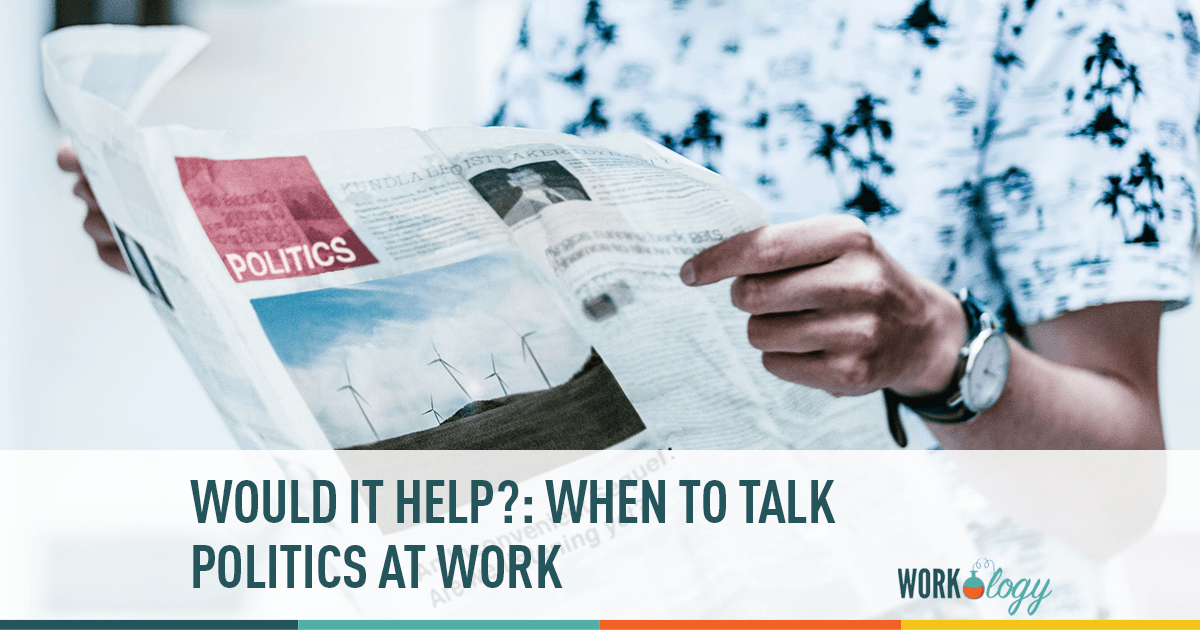 In 2015’s Bridge of Spies, an apt and conscientious lawyer, James Donovan, played by Tom Hanks, unpopularly and with personal risk defends a Soviet spy named Rudolf Abel, who is on trial for espionage and facing a death sentence. Politics and work!

Donovan asks Abel, played by Mark Rylance, several times in different ways if he’s worried. It’s Abel’s response to worry, concern, and prognostication that gave me the AH-HA for this Carnival of HR blog.

Would It Help?: When to Talk Politics at Work

His zen-like and all too insightful response to his state of worry? “Would it help?” Given the state of political discourse, coworkers may be well-served by asking themselves the same question prior to offering response to or initiating conversation about politics. Would it help? Leaders and Human Resource professionals may find themselves in situations where their action IS necessary.

Recently a well-respected diversity leader at a local energy company found himself in just such a situation. An employee came to him to express his discomfort and feeling of adverse treatment because of his political views. His supervisor’s opposing views were evident in the workplace. The employee felt that the manager knew of their opposing views and the employee shared some ill-timed “ribbing” he experienced from the manager that unfortunately coincided with project assignments, etc.

In this case, acknowledging that in addition to all the other ways in which he needed to defend inclusion, the diversity leader felt compelled to make sure that political views did not negatively affect the workplace, relationships within it, and its desired outcomes. He addressed his concern and sense of duty head-on with the senior leadership team, in communications sensitizing the organization to the issue, and making sure that the employee’s manager was addressed directly.

So is life in a leadership, human resource or other position charged with influencing and sometimes regulating people’s behavior.

Even leaders are employees, teammates, and peers needing to assess along with other employees how to respond to peer-on-peer political comments and jokes. A good friend of mine is a personal trainer and gym owner – a position that must at times include responsibilities I equate to those of a bartender or counsellor. Like liquid spirits at a bar, a good workout must break down inhibitions leading people to share their insightful political views with my friend. Kudos to Jim, America’s Fun Fitness Coach, for sharing on Facebook his own zen-like response to political rants offered to him at his workplace.

Regardless of your role, when confronted with or needing to confront workplace political discourse, you may take a clue from Tom Hanks’ Donovan. When faced with a CIA agent asking Donovan to violate the attorney-client privilege, Donovan provides a stern and literal, “We’re not having this conversation…I mean we are really not having it.”