The Degree is dead! Long Live Your Reputation! 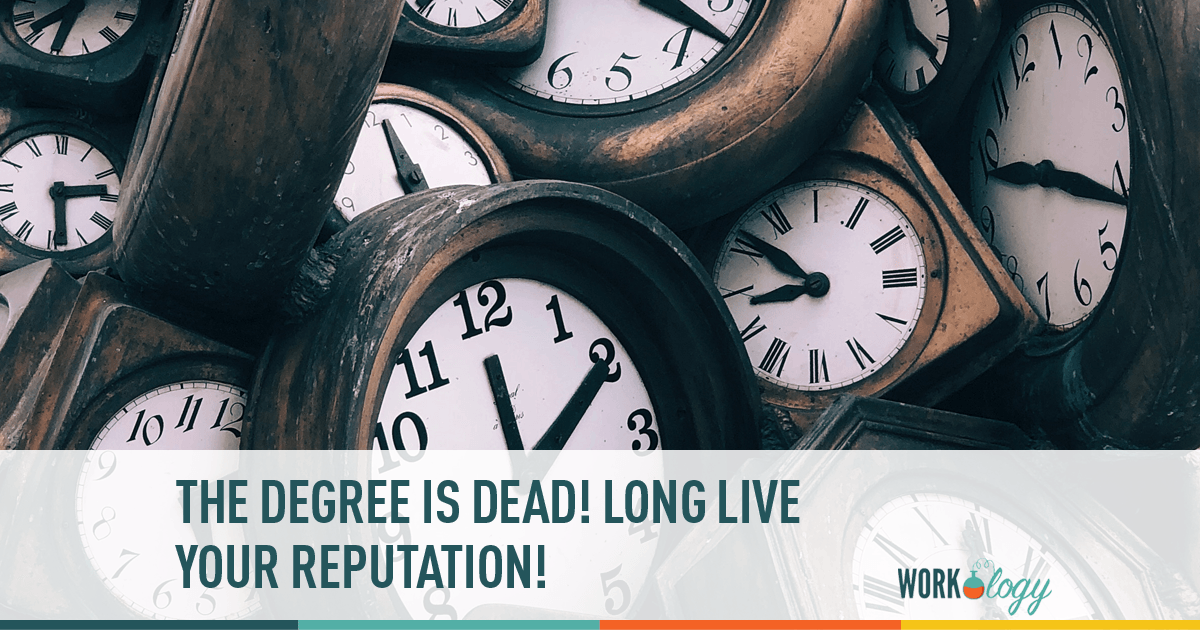 Ok, maybe that is a bit premature. The “degree” is however getting “sicker” by the day and may die sooner than we think. This is going to cause great consternation for HR departments and management teams in general. Let me explain.

Up until now the college degree has been seen as the ultimate credential for job candidates. In an article in the Harvard Business Review Michael Stanton says “From the evaluator’s standpoint, credentials provide signals that allow one to make quick assumptions about a candidate’s potential contribution to an organization and their ability to flourish on the job.” This importance is demonstrated by the fact that most recruiters will pass over candidates that do not have a college degree many times not even paying attention to the work experience. Hiring managers make the assumption about the quality of a candidate depending on whether or not they have a degree. The more prestigious the issuing institution the greater the perceived quality of the candidate.

Stanton however, says that today higher education is being “unbundled’, that is there are more options for education. As a result the perceived value of the degree or credential is being reduced.

Stanton says “The value of paper degrees will inevitably decline when employers or other evaluators avail themselves of more efficient and holistic ways for applicants to demonstrate aptitude and skill.” Social media and other sharing methods have made it easier for hiring managers to evaluate specific training, look at shared content, review shared badges and evaluations and look at work samples on shared content sites. This ability to evaluate actual produced work reduces the need for the candidate to have a degree. This is part of the concept of “reputation capital.”

Stanton also says that degrees today may also indicate training along traditional paths of learning as opposed to innovative ways. A degree from a high ranked institution may also mean the individual may come with high salary expectations thus increasing the costs to the company.

As a result of the increasing number of sites that allow a candidate to demonstrate their skill set (reputation capital), whether or not they have a degree is becoming irrelevant. Stanton says:

A credential, like any common currency, is valued only because of the collective agreement to assign it value.  The value of a college degree has been in question since the Great Recession, but there have yet to emerge clear alternatives for the public to rally the around.  There are plenty of contenders, though, and it won’t be long before one of them crystalizes the idea for the masses that the traditional degree is increasingly irrelevant in a world with immediate access to evaluative information.

The Problem for HR

The major problem for HR is what is the timeline for this change in view on the value of a degree? It is also important for HR to understand these changes. HR must aware of the fields that are seeing this transformation. Obviously technology is the first place to look, but what other fields of endeavor may ultimately change? How will you go about changing the attitudes of managers? For if you and they don’t change and you continue to require degrees then you may actually miss out on the best talent.

The degree as a credential is not yet dead. Millions of parents will have to stop pushing their children to college for that to happen. For some degree programs there may always be a need. I am not sure I want a doctor who has learned just by doing. The point of this post is to make it clear that having a degree as a credential is diminishing in value and HR needs to be aware of the developing alternatives. In the future it will be about someone’s reputation capital.