Thanks iPhone: The Future of Your Paycheck Is Mobile 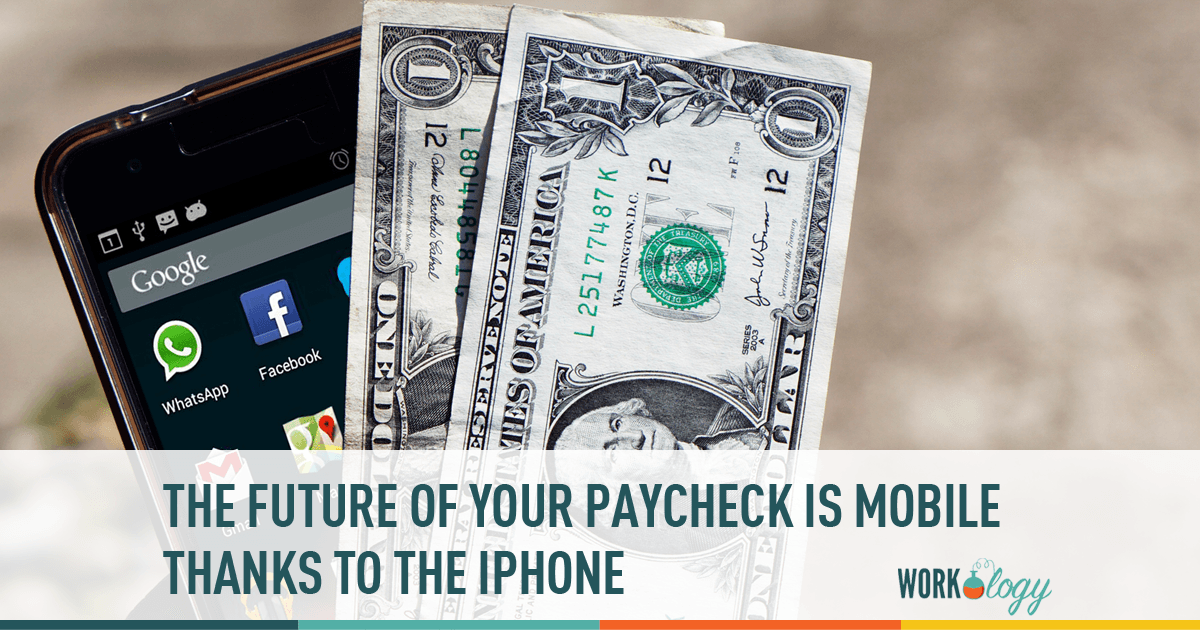 Last week Apple announced a new application, in conjunction with their new phone, called Apple Pay. This application will allow iPhone holders to pay for goods and services by tapping a terminal. The payment is automatically made. Many of us already pay for some things by using our phones. I cannot remember the last time I paid for anything at Starbucks other than through the application on my phone. We are, as a population, getting more accepting of handling financial issues through our phones. Will this open the door our paychecks being handled through our mobile phones as well?

A few studies are showing that more and more financial transactions are being handled on our mobile devices. A Pew Internet study revealed:

A comScore study has found “ that 38% of smartphone owners have used their cell phone to make a purchase of some kind, with digital goods (such as music, e-books or movies), clothing and accessories, tickets and daily deals leading the way as the most popular mobile retail categories.”

The acceptance of using mobile devices is not restricted to the U.S., in fact the residents of Kenya send the equivalent of 20% of their GDP out of the country on an annual basis via mobile devices.

Will People Accept their Paychecks via Mobile Devices?

The “mobile wallet” is gaining steam all the time. Payroll administrators can already process payroll on most HR technology platforms in the cloud and now using a mobile device. Proponents argue there are many advantages to mobile paychecks. These include “that these systems are simpler and more convenient for consumers, since users need only carry a single all-purpose device rather than multiple forms of paper and plastic.” Opponents argue there are many negatives associated with this, including security and adoption by many people. After all not everyone uses a smart phone. Much of the division is along generational lines with younger people being much more adopting of using their smart device to manage their money. But as one wag noted there is a problem when you run out of battery power, because then you run out of money as well.

There is going to be an ever increasing acceptance of the technology. It is even predicted to really take off in less developed countries where there is no established banking system to hold the process up because it cuts into their structure and profitability.

What does this mean for the paycheck? More and more companies use direct deposit, but requires a bank account. What if someone just had a mobile account that their check could be deposited into? What if companies decided to bypass payroll companies and bank directly and had a device that directly deposited money into an employee’s mobile account. What might happen if we had alternative currency systems, such as Bitcoin, that could be entirely mobile and bypassed cash entirely?

These are some of the questions that HR should be working with payroll experts on in order to anticipate what may be coming in the future.

Of course the pay check issue may be further away. After all we do have a 1938 vintage law that says employees must be paid in “cash.” Without a clear definition of that then there can be no alternative currency, not in the U.S. anyway that will be allowed for paychecks. And there is the power of the banking, credit card and payroll companies that will resist a move away from a very profitable system. But you had better be thinking about it.