Will You Struggle To Find A Job in 2015 Without A Social Media Presence? 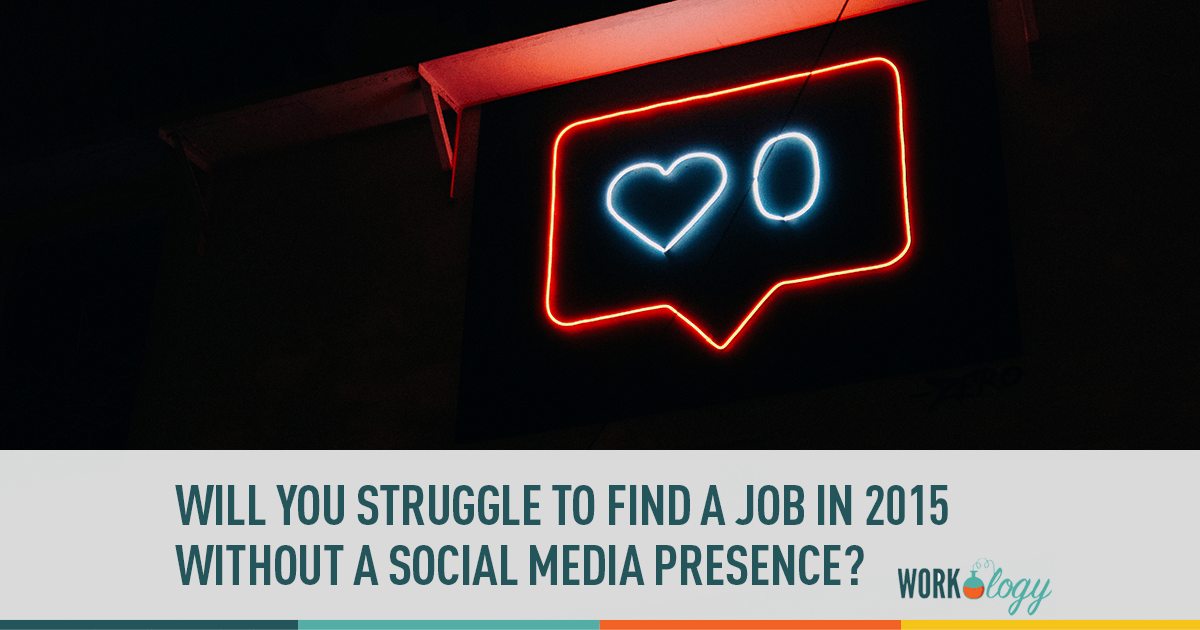 The humble resume is still very much the workhorse of job search world.

Recruiters rely on it to give them a snapshot of who you are. However, is it enough to give you a competitive edge over other candidates?

A year ago, my answer would have been a resounding “yes”. Today, as we sail past the half-way point of 2014, it’s “maybe – depending on which role and industry you’re in”.

In 2015, relying solely on your resume and failing to pay attention to your social media presence during job search will be like driving two flat tires. You might still make it to your destination, but it will cost you a lot more time and money.

This is especially true for senior roles. Today, executives are expected to have an online presence – particularly on LinkedIn – which casts them as a thought leader, passionate about what they do and able to inspire others.

I’m Not Interested In Learning Social Media – Are There Workarounds?

When electricity was being introduced, there were people who were asking if they can continue to light their homes using oil lamps (I wasn’t there, so I can’t entirely prove that – but bear with me).

The answer to their question is still technically a “yes”. Yes, there are workarounds to electricity.

Similarly, as we increasingly work and connect online (and social media becomes the lubricant which facilitates our activity) I think we will enter a new age of employment.

Social Will Connect You With Meaningful Jobs.

During this age the trend will reverse away from working in narrowly defined roles for large companies towards towards roles with more responsibility in smaller companies.

The shift in this direction is already well underway – although at this stage it’s mainly felt in the startup community. I think in the next 5 years it will spread into mainstream employment world, offering incredible opportunities to people who are ready for them.

This shift will not happen via resumes and job boards. It will happen entirely through social media.

Why would we want to work around an opportunity like that?

How Much Social Media Presence Is Enough?

At minimum, social media presence for job seekers who are serious about their career should take the form of a fully developed LinkedIn profile with a professional headshot.

Creating a polished LinkedIn profile and leaving it abandoned, however, is not a strong strategy.

I suggest that job-seekers update their status at least a few times per week by posting links to interesting, relevant content which they discover online and adding their own context to the link through through discussion in LinkedIn Groups.

How Do Employers Use Social Media To Screen Me?

Imagine that you’re a business owner and you have to fill a role of a Marketing Manager.

After flicking through the pile of resumes you’ve received, you shortlist two candidates of equal footing. They are similarly matched in terms of education, experience and achievements.

One of them, however, has a reasonable social media presence. Let’s say her name is Jane.

A quick scroll through Jane’s tweets reveals a lively discussion around the topic of digital media. Specifically, it seems she’s obsessed with squeezing out the most out of paid search campaigns using Google Analytics. It’s something you know nothing about.

The other contestant also has paid search management listed on his resume, but here’s Jane – in real time – geeking out over bounce rates and inviting you to read her blog posts on top-tier marketing blogs where which she shares her discoveries.

You combine Jane’s name with “marketing” in Google search and discover that she has published her ideas on at least half dozen other marketing blogs.

You also notice her personal blog. It seems she keeps it a work-free zone, sharing humorous – but never inappropriate – anecdotes from her life. You get a glimpse into her personality and get the impression that her dry sense of humour would be a good match for the culture in your business.

Finally, you click over to Jane’s well-constructed LinkedIn profile. It bristles with recommendations and endorsements from previous colleagues and bosses, as well as a more in-depth review of roles you’ve already seen on her resume.

The other candidate has nothing. Who would you call in for an interview?

Yes – if you use it to add value to lives of other people.