Turns Out, There Is Political Discrimination and Harassment Too 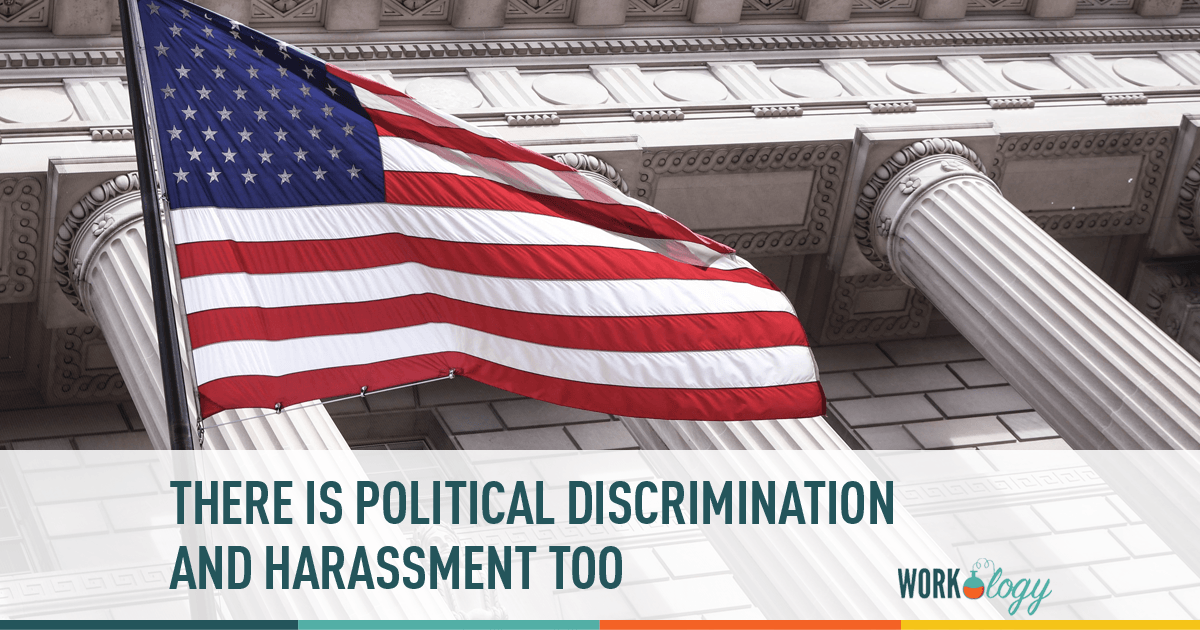 There Is Political Discrimination and Harassment Too

Seven or so years ago, I was asked to teach a course for a client regarding discrimination and harassment prevention. They had offices outside of  Alaska so I researched EEO issues in those states in order to update my workbook materials. My research quickly revealed an addition to my list of protected classes:

When I saw those words, I rolled my eyes. You see, while I’ve always been an advocate for fair and just treatment of employees, I’m not a huge fan of protecting every little group of folks. I wish, instead, that companies would model and, consistently demand professionalism, manners and courtesy from everyone in the workforce. If they did so, they could terminate anyone who didn’t meet that behavioral standard and still sleep like a baby at night. But I digress…

Today, when I read those words, I nod my head. We are just over a year into the most contentious political race I have seen and this protection makes a lot more sense to me now.

Now, let’s explore the scope of it.

Now, let’s think about it.

If you think that manager or supervisors are not dumb enough to make employment decisions based on what bumper sticker someone has on their car, how someone voted on a particular ballot measure or candidate, or what Meme or Vine someone just shared on social media, please think again. There are plenty of dumb managers or supervisors in our country and only in a handful of states would there be repercussions for behaving poorly in this context.

Moreover, let’s extend our thoughts to the general workforce. While coworkers don’t have direct autonomy over employment decisions, they do have the ability to create an offensive, intimidating or otherwise hostile work environment based on their own beliefs, values, bias’ and prejudices. And I’m sorry to say there are plenty of people who deliberately change their behavior towards another individual because of a bumper sticker, how they voted, or social media activity.

Look in the mirror and ask yourself to be honest about why you quit inviting the neighbor to BBQs, why you started making derogatory remarks about the parent on the soccer field, or why you quit sitting at a certain table at the pancake breakfast after church.

Honest answers might lead to your or the individual’s political ideology and/or affiliation with a certain campaign this past year.

Lest you think I’m above reproach, let me assure you I have behaved in this way. I seem to be in a continuous battle in my mind and heart these days about this very issue!

This isn’t the first contentious political race, but I believe it’s the most divisive in our nation’s history. I also believe you are kidding yourself if you don’t think this is spilling over into the workplace.

Let me provide you just a small sampling of examples below.

Political Affiliations and How They “Border” Traditional Protections

Although not every state has a specific law protecting political affiliation, political issues can often border other affiliations such as gender, race, national origin, etc. that are consistently protected around the nation. Therefore, while an employee’s activities may not fall under “political affiliation” protections, he/she may still be protected under traditional nondiscrimination legislation.

The supervisor who consistently makes derogatory statements about a political candidate and uses words like “bitch” or “cunt” to describe that candidate would find it nearly impossible to defend him/herself against a gender discrimination claim.

The coworker who consistently or continually makes disparate comments about a candidate or political party and pairs these comments to a religious platform or position would be hard pressed to defend him/herself against the claim that coworkers having opposing religious beliefs, values, etc. did not feel intimidated, unreasonably uncomfortable or offended in the workplace.

The group of employees who continually support a particular candidate with strong views about immigration, visas, citizenship, etc. and think it’s appropriate to make multiple statements about how big the wall will be, how they would be amused by certain deportation activities, etc. would likely find themselves in a shit storm of discrimination based complaints.

Goodness, this section alone could go on for another 1000 words but I’ll cull it here.

Political Activities (At or Outside of Work)

The states that have laws specific to political affiliation protections vary in how these protections are applied and/or interpreted when it comes to specific political activities at or outside of work. For instance, in some states, an employer cannot, during or outside of work hours or in or outside the work area, persuade, threaten or intimidate an employee or group of employees from voting a certain way. Likewise, other states say an employer cannot retaliate against an employee for failing to support a candidate, a ballot decision, or party whether it was on behalf of the employer on on his/her own personal time. And in other states, employers cannot track or monitor political activity nor can they threaten to shut down or layoff employees should a particular candidate be elected or issue be approved.

Employers in states that do not have laws specific to political affiliation protection could either find refuse or risk in their conflict of interest, code of conduct, outside activities or similar policies.

For instance, most employers have policies against doing anything “non-work related” during work hours, on company equipment, etc. These policies either directly or indirectly include political campaigning, activities for personal gain and similar activities at work.

(Coincidentally, they often discourage the solicitation of orders for and sale of Girl Scout Cookies in the break room, which is quite disturbing for someone like me but that’s a whole other blog topic.)

Some of these policies extend to activities outside of the regular workplace and/or typical work day or week.

The supervisor who wants to fire or otherwise disparately treat an employee or a group of employees for campaigning for a particular candidate or party outside of work hours is gonna find that road a tough one to hoe.

The employee who thinks it’s safe to spread political propaganda via documents, flyers, emails, social media, etc. during the work day, on employer premises, using employer-furnished devices or equipment is going to be sadly disappointed when he/she is legally disciplined or let go for doing so. (Please note, this is similar to religious proselytizing, which employers do not have to allow provided they are consistent in applying this prohibition.)

The group of employees who claim their lunch-hour participation in the rally supporting a particular candidate or party that proports that Christianity is the only true religion cannot easily defend against the claim that their public and proud participation doesn’t bleed over negatively into their workplace wherein there are multiple non-Christian coworkers.

Employees discussing why a candidate is better for them as workers and could affect the working conditions just transformed a “political discussion” into “concerted activity” and, as such, the employer can’t do a damn thing to stop it.

The group of employees who decide to create and/or wear buttons or t-shirts that communicate a support or opposition from their recognized union and a particular party or candidate have to be allowed to wear them at work.

The supervisor or employer who wants to hold its workforce hostage (captive audience) and talk about how a political candidate’s election or a ballot measure will affect the employer has the right to do so provided it’s factual and/or in good faith.

Speaking of captive audiences, I have held you here long enough…but bear with me for just a little longer.

How should you handle “politics” in the workplace?

I hope you’ve found some value in this post if for no other reason than you’re now thinking about how little or how much protection you have when it comes to your political affiliation. This is a slippery slope, for sure, and it’s bound to become more so as November draws near.

My prediction is that we will see a helluva lot more states with legislation regarding political affiliation protections. Subsequently, we’ll see massive edits, additions and education regarding applicable employment policies and practices.

(It certainly would be more palatable if I had some Girl Scout Cookies.)