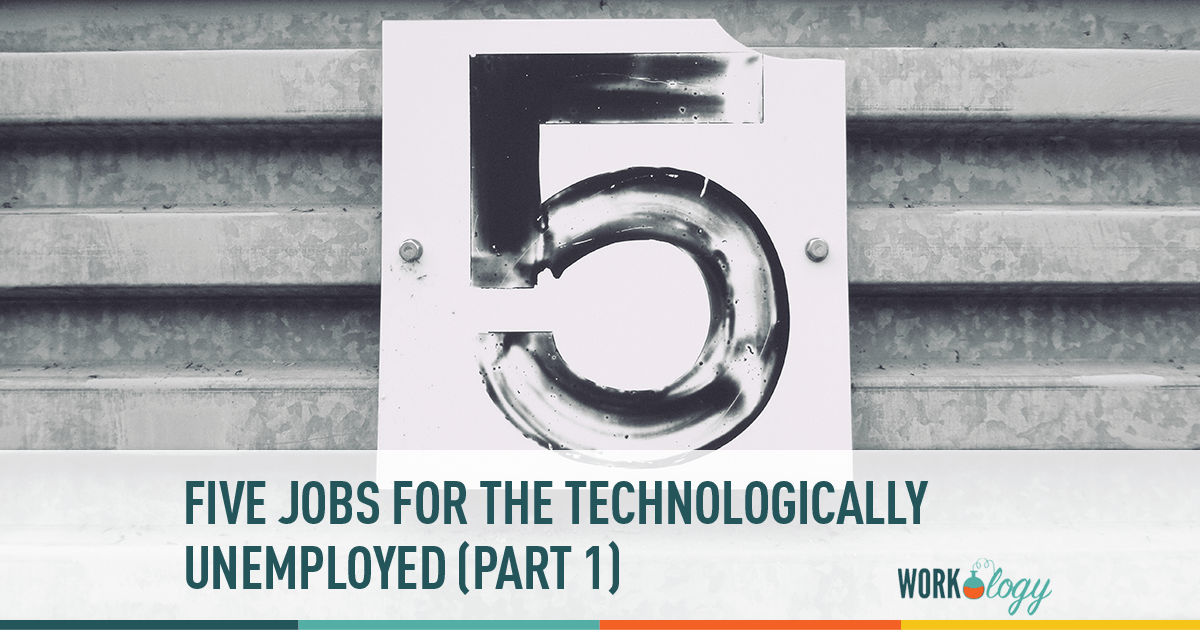 Technological unemployment is the point at which technology is destroying more jobs than are being created. In a survey of readers of the Institute for Ethics and Emerging Technologies (IEET) newsletter 51% of the 428 voters said that they think we have already reached that point of being technologically unemployed. Another 9% said we will reach that point soon. The remaining 40% are equally divided between thinking we will only reach that point if we do not teach people new technological skills and those that think technology always will create more jobs than it destroys. I am of the school that thinks that we have an obligation to train workers to be able to use technology, whether it benefits our companies directly or it prepares them for new roles in the workforce.

New jobs for the technologically unemployed

Futurist and Transhumanist, George Dvorsky, wrote an article outlining some jobs that will be created to take advantage of the labor that will be freed by technology. Some of these are pretty interesting. These jobs were the result of The Inspired Minds project, the result of a collaboration of Canadian Scholarship Trust and the foresight experts at Idea Couture. These ten jobs include:

The anticipation of robots in the workplace is joined by an anticipation of robots in your home as well. There will be a need for robot counselors, people who work with families to help them select the right robot for their particular needs. As one of the foresight experts said “A robot counselor would observe how the family interacts and identify their needs so that they can make wise decisions about the types of robot assistants they might need. If a robot isn’t fitting in, or if it is causing discord in the home, a robot counselor would be on hand to provide solutions and alternatives.” I envision the robots in I Robot when I read this.

We already have people today that help recover depleted land areas and try to return them to a more natural state by planting trees, removing invasive species, etc. These people are precursors to “rewilders” who are described as someone whose  “job is to help hasten the recovery process of natural habitats that have been decimated by human activity. The work of a rewilder would draw heavily on distributed sensor technology.” Technology will greatly enhance the work of those that are in that field today.

“A garbage designer is someone who taps into the value of trash in order to design valuable products.” Today landfills are filled with what has been described as a treasure trove of materials that can be turned into valuable items. For example today a company named Freitag, makes a Swiss messenger bag out of repurposed truck tarps. People who have a very creative mindset can be employed in this area employing skills that technology would not be able to match. Only an imagination is needed.

This is a subset of a job category that I think is going to be huge in the next 10 years. People will be needed to fly drones for many different reasons, as we have already heard Amazon and UPS say. But as crime increases there will be services to provide neighborhood watch services, a roll that is filled by volunteers now.

Today efficiency experts design just for that- ways to improve the flow of things efficiently. This is a holdover of an industrial model of the way things get done. “A simplicity expert is a bit like an organizational consultant, except instead of optimizing for efficiency they help organizations optimize for simplicity in their practices and environments,” According to the experts this is not the same as efficiency. It is based on a fusion of “management science and cognitive and behavioral psychology to strike a balance between the goals of both organizations and the humans of which they are comprised.”

These are the first five of these ten new job areas that will arise. I will be back next week with the next five.