Are Coworking Spaces the End of The Workplace? 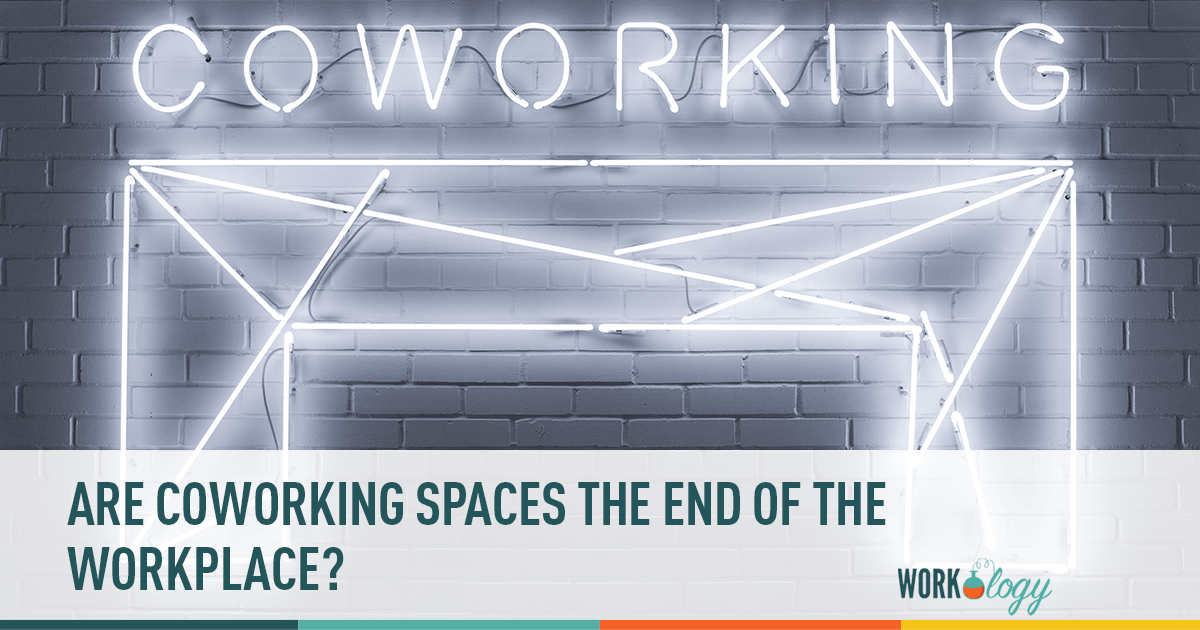 I’m in the process of moving my business from my living room into a co-working space.

Before I began this process, I believed that co-working would be like having a Starbucks Office v2.0 – cheap, informal, social, distracting and not very productive.

As I began to look deeper into it, I realised that my initial assessment was outdated. Co-working has matured and may indeed be one of the most important working and cultural phenomenons of our generation.

It’s also on the rise.

The obvious question becomes – can this be the future of employment? Will we all one day work in small teams from hot-desks in funky surroundings, reporting to big bosses via cloud-based collaboration software?

Well, as I was doing my research to see if there was a business case for my team to move into a co-working space, I dug up all kinds of interesting views and predictions in response to that question.

Turns out, co-working is just a small part of a huge cultural and technological shift which will impact HR professionals in the next 5 years.

Firstly, I want to dispel a myth. Co-working is not just about renting furniture and a stable Wi-Fi connection. Its real value is in solving problems by creating chance encounters between unlikely allies.

Despite what my ego would like to believe, I know that my small, but capable team can’t have solutions to all the possible challenges we’re going to face.

Steve Jobs famously approached the issue by designed Pixar’s bathrooms in a way that increased the number of random conversations.

I decided to do it by giving co-working space a shot (as opposed to renting a private office). I’m very interested to see what (if any) gains will be achieved by being in a collaborative environment. Stay tuned! 🙂

What’s most surprising to me is that some monoliths like AMP are already giving co-working spaces a nod of their approval.

They want to know whether giving their employees an opportunity to work from a co-working space for a part of the week will lead to business performance gains.

It was surprising to me, because since Marissa Mayer fired a shot across the bow last year by stripping Yahoo employees from remote-work privileges, the resulting debate raged on for months – and it seemed that big corporates were backing Mayer’s stance.

Allowing employees to work from home or at a co-working space was a little too “out there” for the liking of most managers.

I dug deeper and found a fascinating study which acknowledged the changing desires of up-and-coming talent and looked at it as an opportunity to reimagine the modern workplace.

It predicts that by 2016, almost 80% of the workforce will be Millennials and – you guessed it – they don’t want to be stuck in an office tower 5 days a week.

Brad Krauskopf is the CEO and founder of co-working space Hub Australia and he supports this view. “Your head office will need to have a kitchen, a lab and a classroom – and not much else”, he says. In this model, the head office is the place to set tone of the culture and direction of the strategy.

The rest of the company, according to Krauskopf, can work from widely distributed, flexible and interconnected workplaces which can be scaled to suit changing needs of individual teams.

The Problem With Working Remotely.

This flexible, less centralized workforce runs into a problem when presented with this statistic: 35% of the variation in a team’s performance can be accounted for by the number of face-to-face interactions. This is something that large companies will need to take into consideration as they design their remote work policies.

Some experts predict that the future workforce will be less interested in permanent, full-time jobs and that the economy will strip away a significant portion of those jobs, anyway.

I agree with this view.

If that is indeed true, HR departments (especially those of large corporates) have a huge challenge in front of them. When recruiting top talent, they’ll face competition not only from other companies, but from the potential employees themselves.

Heather McGowan, an innovation strategist and academic entrepreneur describes this as a rise of the income generation economy.

This economy is empowered by social networks, mobile devices and an increasingly collaborative mindset amongst the Millennials. These factors combine in a way that allows an individual to function as a business, leveraging resources and skills in a global marketplace for a wage.

McGowan points to services like feastly, TaskRabbit, Guru and Quirky as hubs which already allow people to dabble in the income generation economy.

The question is, if these people are now making some money on the side, enjoying what they do and no longer depend on their “real” job as much to pay the bills, will they want to keep that job?