Why You Should Watch the Oscars with Workplace Issues In Mind 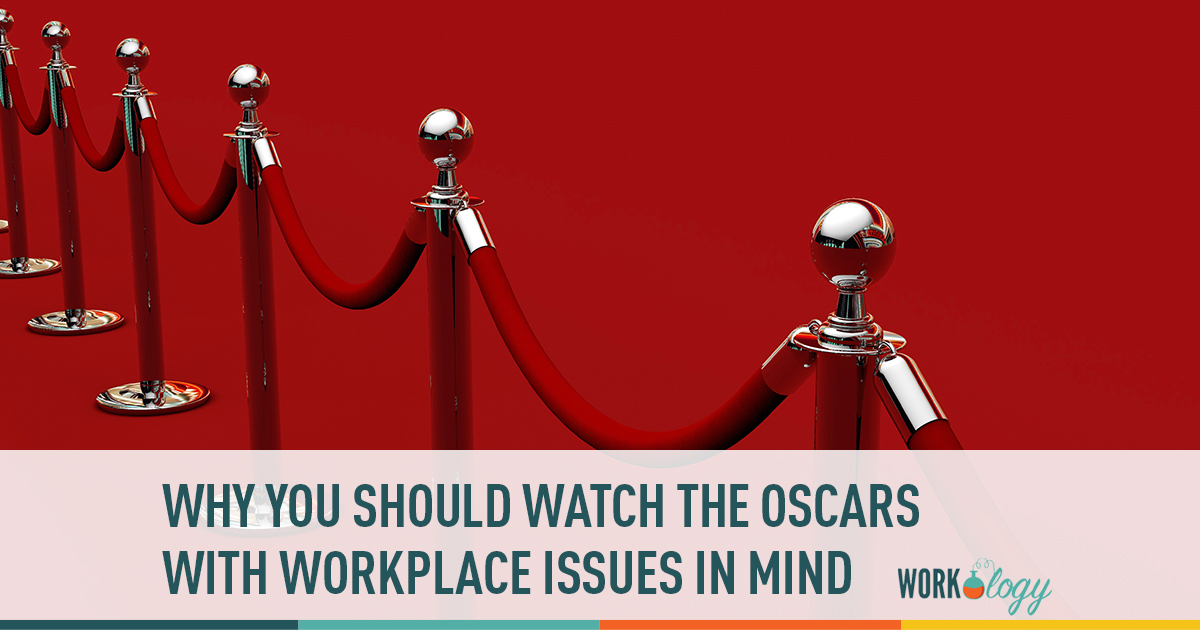 On Sunday, half out of habit, many of us will tune in to the Oscars. The annual Hollywood pageant and award show has been under fire in recent years for its too-white, too-male, too-boring nominations. Last year, April Reign‘s hashtag #OscarSoWhite brought attention to the issue and galvanized the Academy to diversify its membership, in hopes that having a more diverse nominating and voting base would start to change things. Change is coming but slowly and inconsistently, and the homogeneity of Oscar nominations and win is impossible to deny.

And the Oscars’ diversity problem isn’t limited to the Academy, it’s reflective of the film industry’s endemic issues with diversity and unfair pay. Although many Americans look on Hollywood as a bastion of liberalism, the Oscars are a microcosm of an industry that is and has been hostile to diversifying its workforce and examining its biases.

Why You Should Watch the Oscars with Workplace Issues In Mind

Most of us don’t work in the film industry. But we can’t afford to ignore workplace issues in Hollywood because they are so tremendously influential. When Natalie Portman spoke out about the pay gap between male and female performers it kickstarted pay gap conversations in other industries. Similarly, #OscarsSoWhite leant weight to conversations about diversity programs (hiring, pipelines and promotions) elsewhere. And beyond that, I think the Oscars are an interesting case study for anyone who works in HR or leadership. As you watch the show this Sunday, I’d like you two consider two key workplace issues: workforce diversity and fair pay.

How Unrepresentative Is Hollywood?

Only 14 Black people have won acting awards at the Oscars. No Asian-American performers have ever won acting awards. Only one Native American person has won an Oscar (for music) and only two have been nominated in acting categories. Only one woman has ever won best director. The Oscars, in terms of nominations, wins and voting base, are blindingly white and most male. But this only scratches the surface. Many other Hollywood strongholds — studio bosses, production companies, top technical positions behind the camera, and even positions in top schools and workshops — are just as white, male and straight.

According to UCLA’s annual Hollywood diversity study, which examines employment in Hollywood, “people of color have posted gains relative to their white counterparts in five of the industry employment arenas examined […] Minorities lost ground in four of the 11 arenas […] and merely held their ground in the other two.”

This is, of course, wildly unrepresentative of the American population, but it’s not completely out of line with the top leadership in many other industries. Rather than diversifying, leadership of top companies has actually be getting whiter in recent years — despite the fact that most CEOs now say that diversity is a core organization value. But even when women or minorities do manage to get a seat at the table, they’re paid less — sometimes remarkably less. The 2014 Sony hack revealed that Hannah Minghella was taking home $1 million less than her co-president Michael De Luca.

Imagine having to report that not only did your company not meet its diversity hiring goals, but it moved backward. That from top to bottom, you interviewed fewer women and people of colour, offered positions and promotions to a growing pool of white men, and diverse candidates could only succeed in your organization in a few specific roles. In the case of some tech giants that’s exactly what they were forced to report earlier this year. Just as the reasons for Facebook’s failure weren’t mysterious neither is the reason that Hollywood has so struggled to do better. Facebook’s hiring process included a final panel of engineers who weren’t accountable to HR or company directives for their decisions, choosing instead based on whether candidates seemed like they would fit in. (Surprise surprise, those engineers hired men who went to the same schools they did, or worked at companies they admired, or who already had friends at Facebook.)

In Hollywood, the top rungs of power are still overwhelmingly occupied by white men. Guess who they have confidence in?

How Big Is the Wage Gap?

Oscar nominated actress Natalie Portman made 3 times less than Ashton Kutcher for the dismal romantic comedy, No Strings Attached. Jennifer Lawrence and Amy Adams both made millions less than American Hustle co-stars, Christian Bale and Bradley Cooper. In 2015, Lawrence made $52 million total, whereas Robert Downy Jr. made $80 million, despite Lawrence being the star of the high-grossing Hunger Games franchise. Is there a Hollywood wage gap? Yes, and it’s big.

The Hollywood pay gap is a particularly interesting case because, not only is it worse than the average, none of the usual excuses for unequal pay can be employed in defence of it. Men and women in Hollywood clearly and undeniably do equal work for unequal pay. Movies with male leads sometimes do make more money, but movies with female leads offer higher return on investment. WeathSimple crunched the numbers in a recent report. According to them,

In 2016, women working as actors made, on average, 87% as much as their male counterparts, placing actresses squarely in the middle of the pay-gap spectrum. In the upper echelons of the industry, however, the gap was more dramatic: The top ten highest-paid actresses earned, on average, 42 cents for every dollar earned by their male counterparts. And the top five, as you can see below, earned 48 cents for every dollar earned by the top five male actors.

But not only women make less in Hollywood, they have much shorter careers. Jokes about women in their 30s being considered over the hill in Hollywood are cliche, but they’re also completely true. The roles quickly begin to dry up and so does pay. A 2016 study found that actress pay peaks at 34 and then rapidly declines. For male performers though, age isn’t a problem. Their pay continues to increase until age 51 and rather than decline at that point, it merely flatlines. Men continue to get starring roles well into their senior years, while women occasionally show up to bake pie, dispense emotional advice and occasionally look sad — in other words, to play grandmothers.

According to the Center for the Study of Women in Television and film, “in 2016 women comprised 17% of all directors, writers, producers, executive producers, editors, and cinematographers working on the top 250 domestic grossing films.” Their recent study of behind the scenes employment shows that there is something very wrong with the Hollywood talent pipeline. Only 7% of films studied were directed by women. The behind the scenes role that women were best represented in was producer, at 24%, followed by editor, at 17%. Those are abysmal numbers just on their own, but the inability of women to break into top roles cuts into their potential earnings. It’s not just the role-for-role wage gap (which, no, is not a myth), it’s how women and minorities’ careers are plateaued. The pay is unequal and so are the opportunities. The gap in pay and opportunities is exponentially wider of women of colour. To get a sense of how race and gender intersect in terms of Hollywood hiring and award discrimination, consider that only one Black woman has won for best actress — ever.

As the Oscars, So Goes the Nation?

The Oscars aren’t a perfect representation of the lack of advancements we’ve made in making the workforce more diverse and equitable, but they are an interesting one. Beyond the impact they have on our culture as a whole, they shine a light on how commonly that lack of progress is excused. Just how well do the usual lines about bad talent pipelines, men being more career oriented or diversity hiring programs being so very difficult to implement hold up? If they don’t hold up for Hollywood, do they really hold up in your industry? If women in Hollywood provide greater ROI and diverse teams consistently perform better, as studies consistently demonstrate, then what’s the hold up?