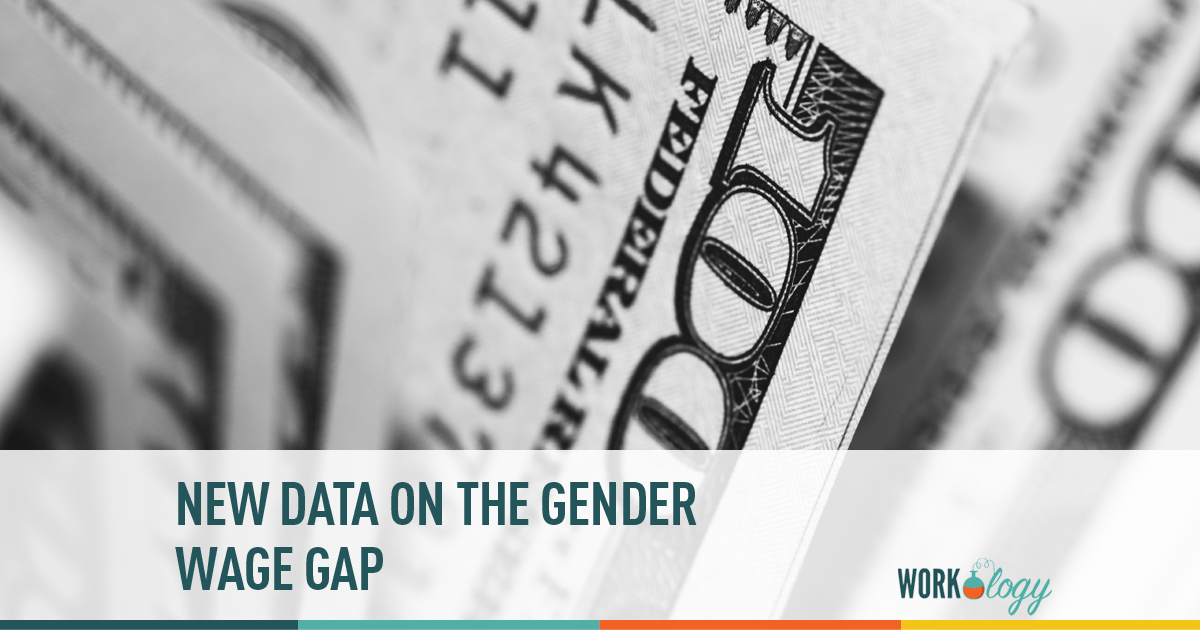 To arrive at the controlled wage gap, Payscale compared wages in identical jobs: HR Manager to HR Manager. They also controlled for education, experience, location, and hours worked. To arrive at the uncontrolled wage gap, Payscale compared sector earnings to sector earnings: women in HR to men in HR. In identical jobs, men earn 2.7% more than do women. But sector to sector, the overall wage gap soars: men in a given sector earn 25.6% more than their female colleagues.

And although some sectors stand out with more average pay equality, Payscale found that, overall, women earn less than men in every sector. Two factors are at play: not only do men hold most of the top level — and top paying jobs — across the board, in sectors which are dominated by women, men still make more. Here’s a glaring example: male nurses make on average $5000 more per year than do female nurses. In tech, where the wage gap is much smaller at entry level and middle management roles, it explodes when it comes to executive roles. So too does the over-reresentation of men.

“Even more disturbing is that when we run the numbers to find out how things like marital and family status, job level, job type, industry, location, education and more affect gender pay equity, we see that the pay gap widens as you climb the corporate ladder, that men get promoted faster than women, and that women report more negative feelings about job satisfaction, job stress, and communication with their employers.”

None of this should be surprising to you. By now, even the most laissez-faire of managers are familiar with both the wage gap and the promotion gap. What varies more is the explanation you favour for it. Do women just not apply for senior roles? Are they unfairly penalized for requesting accommodations for family life? Payscale found that as job level increases, so does the pay gap. Not only is over-representation of men at the top level — ie. the glass ceiling — a major factor in the wage gap, controlled wage inequality is at its highest in executive roles. If 6.1% sounds small to you, consider that Payscale found that women are more likely to be executives in smaller companies and they are more likely to plateau at the non-senior executive level.

They also found that married women earn less than married men and that both the controlled and uncontrolled wage gaps are obvious. Again, no surprise here: women are penalized for having families. The gap persists even when Payscale introduced the question “do you ever prioritize family obligations over work responsibilities?” In fact, Payscale found that men were more likely to say that they sometimes prioritized family over work and that this had no affect on their wages. The wage gap is at it’s smallest among men and women without partners or children, who don’t prioritize their home lives.

What this portion of the data makes clear is that although women still do the majority of the housework and childcare in heterosexual families, mothers don’t prioritize family life more than fathers do. That is, it’s the perception of mothers as being pulled between two sets of priorities that penalizes women, not women’s attitude to work, and probably not their work performance.

Where Payscale’s study falls short is in controlling for other factors such as race, ethnicity, orientation, and non-binary gender. Because the study compared men to women, it doesn’t have much to say about wages for transgender or genderqueer people. And because the study compares all men to all women, it can’t illuminate real wage gaps within those groups. That is, Payscale’s study doesn’t account for things like white women, overall, making more than Latino men overall, or Asian-American women earning more than African-American women. This chart, from The New Republic, demonstrates the racial pay gap among women: 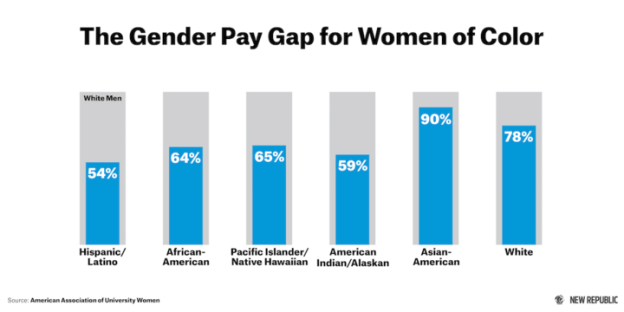 The differences are significant, and demonstrate that the gender wage gap isn’t just about the gender binary: it’s complicated by other factors, and those factors require more critical and analytical attention. Are some working mothers penalized more than others? Are some working fathers penalized for prioritizing family, while others are not? And how does family life impact the wages of LGBTQ couples? According to a 2012 meta-analysis, the wage gap between straight and LGBT families is significant. In Fast Company’s response to the data, they zeroed in on the role of higher ed — and implicitly, class — pointing out that “PayScale found that at the GED/high school grad level, the pay disparity is 2.3%, while PhDs have the highest controlled pay gap (5.15%), followed by MBA holders (4.7%), and MDs (4.6%). Engineers tie with graduates of art and design schools for the lowest controlled gender pay gap of 1.9%. By contrast, graduates of ivy league schools report the second-highest controlled gap at 4%.”

Payscale’s data is interesting because it draws from a wide cross-section of workers. The data is crowdsourced from 1.4 million full time employees and analyzed by Payscale’s data scientists. (You can learn more about their methodology here.) Because Payscale has access to such a big pool of workers, they have the opportunity to do ongoing in-depth analyses. I hope they continue to analyze this and future survey data to further contextualize the gender wage gap, which, as we can see, is anything but simple.