Why You Should Consider Candidates with Criminal Convictions 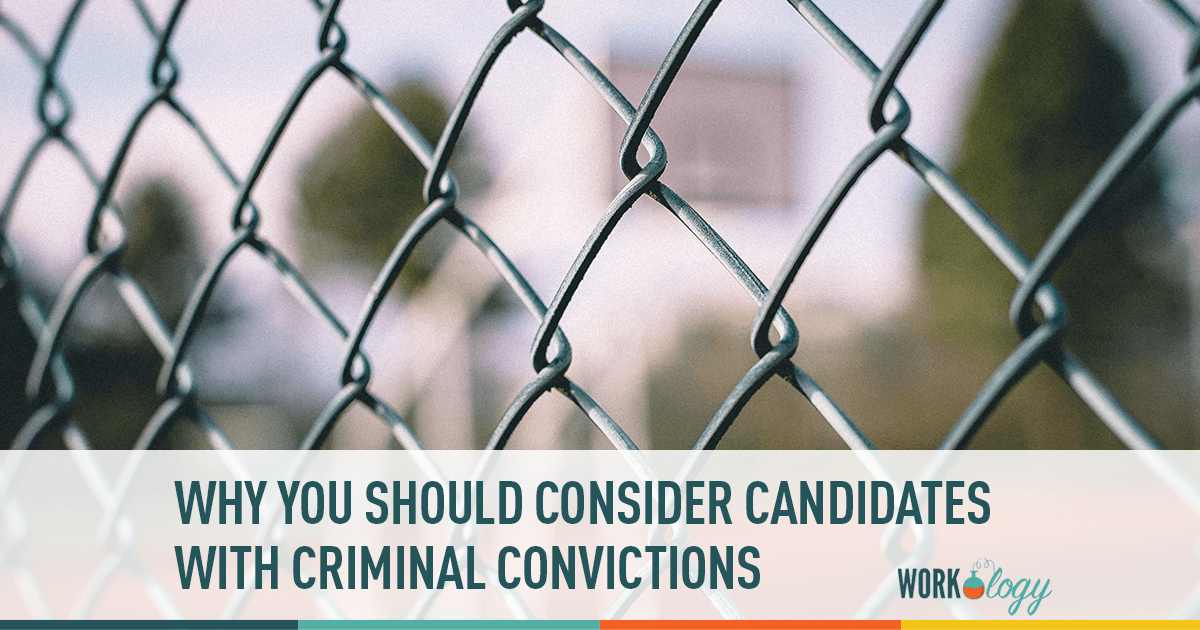 The rate of imprisonment in the U.S. has risen drastically over the past few decades. According to the Brennan Center for Justice, nearly one-third of the adult population has a criminal record. If an employer decides to avoid hiring those with records, that’s a huge percentage of the talent pool that will not even be considered. Rather than outright dismissing a candidate because of a criminal record, employers would be better off considering the whole candidate and seeing them as more than just their convictions.

A Criminal Record is not always a Red Flag

Early in my HR career, my boss was going over how she screened applications. She told me, “If I see that they checked yes to the question about convictions, I automatically reject them. They can go get experience elsewhere, and then come back here when their life is stable.” This never really made sense to me given that we were a company that hired minimum-wage warehouse and manufacturing workers. It was the ideal place to get experience and have the opportunity to rise up the ranks, especially for those leaving jail or prison with a limited work history.

During that time I also volunteered in the women’s jail in town and did art and writing workshops. When my workshop participants found out I worked in HR, they often asked how to get around their criminal histories in the job application process, and I realized that the challenges for many of these people really increased following release. Despite having served their time, many were faced with being barred from services, housing and employment because of their records. Without a stable income, many ran the risk of recidivating. Why do we set up a system where people are continually punished for mistakes in the past even though they have already served their time?

Later on in my career, I worked at a company that was open to hiring people with records, and I was able to successfully bring in new employees who had previously served time. In my experience, such employees were no more likely to be bad employees than those without records. Research backs this up. A recent episode of the Planet Money podcast explained the results of the U.S. military hiring those with felony records. It turned out that those with records not only performed just as well as those without, but in many cases they performed better.

The Ban-the-Box movement has been gaining momentum in the past few years. In fact, some jurisdictions already have ban-the-box laws in place. Such laws bar employers from asking about convictions on a job application and often delay the criminal background check until just before an offer is made. Having to check yes to the conviction question early in the process puts a candidate at a disadvantage in that some hiring managers may automatically assume the worst about the candidate without learning about all the other things that may make them the right fit for the job.

In 2012, the U.S. Equal Employment Opportunity Commission (EEOC) issued its guidance on considering conviction records in the employment process. Certain protected groups have higher rates of incarceration, and the EEOC found that barring those with records from employment may have a disparate impact on such groups. The guidance from the EEOC is not law, but it is used in investigating claims of discrimination that may arise relating to criminal conviction. It is useful for employers who want to be inclusive and sensitive to the issues of those applying for work with records.

One of the key items in the EEOC guidance is that employers who exclude candidates based on criminal history must show that, “such an exclusion is ‘job related and consistent with business necessity’ for the position in question.” This comes down to determining if criminal background is necessary for a particular job. Even in a job, such as working with children, where an employer could make the case to do a criminal background check, only certain types of convictions should disqualify someone from the job. Given that an overwhelming majority of those serving time are locked up for nonviolent offenses, many with records are not the risky, scary people they are often made out to be. Many would excel as employees if given the chance.

Supporting a Culture of Second Chances

Once someone has served their time, they should not be continually punished. We need to be a culture of second chances. One mistake in the past should not keep someone from getting a good job and building a comfortable life. Given that a steady job can be a gateway to success for many upon release from jail or prison, employers should be on the frontline of giving people a second chance. Employers also get the benefit of a large pool of candidates who are often overlooked despite the fact that they could grow to be superstar employees.

Aside from the societal benefits, employers who hire those with records can also take advantage of the Work Opportunity Tax Credit (WOTC) and the Federal Bonding Program, which is an initiative of the U.S. Department of Labor and offers bonds that cover the first six months of employment for at-risk and hard-to-place job seekers. Check the National HIRE Network to see if your state offers additional programs.