What the Google Guy Teaches Us About Free Speech at Work 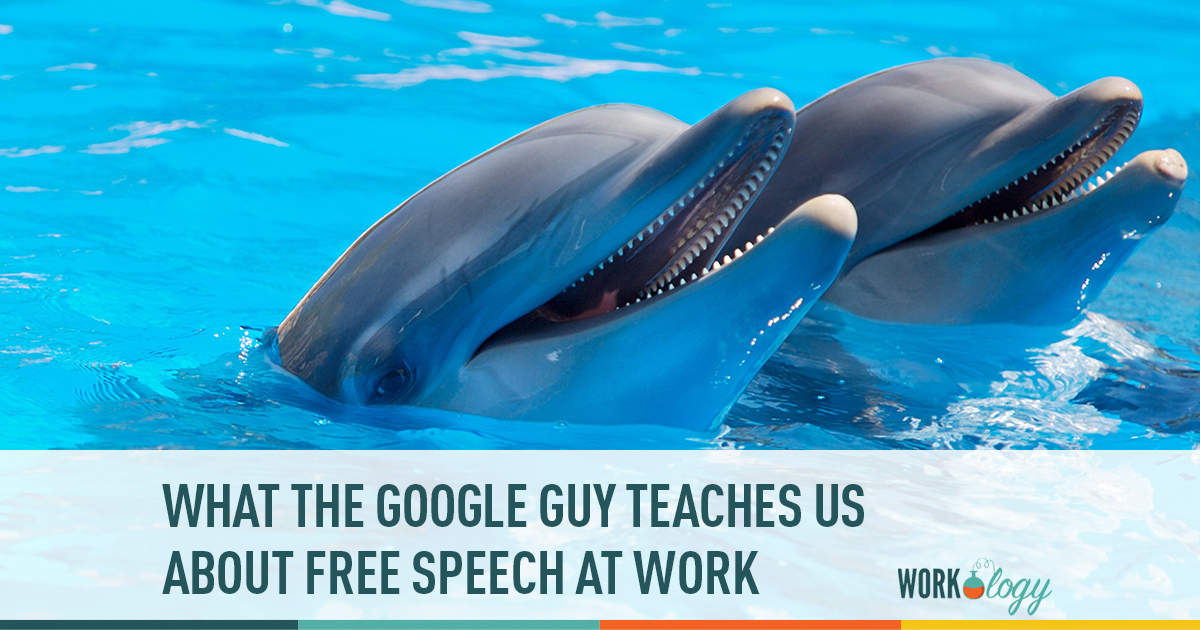 When Google fired James Damore, the engineer who wrote and circulated a ten page manifesto on how to approach workforce diversity “rationally,” many people cried that it was a violation of his right to free speech. The funny thing about the First Amendment, though, is that it doesn’t guarantee you freedom from consequences or free speech in the workplace.

So while James Damore is free to write a ten page blog post about why women are intellectually inferior, stressed rabbits, he is not free from the consequences of doing so. Namely that people will push back. He is also not free to share that post at work, circulating it on the internal social media network. The sections of his memo which used discredited science to prove inherent differences between men and women (and implicitly different races) are therefore not protected by the First Amendment.

However, there are sections of the memo (mainly those pertaining to specific Google policies) which are protected speech – just not protected under free speech laws.

The First Amendment primarily protects citizens from government censorship and censure – it was intended to stop the American government from oppressing the people. In the case of free speech, that means monitoring and dictating the bounds of appropriate speech. With regards to speech, it says that “Congress shall make no law…abridging freedom of speech.”

Because the First Amendment was designed with government and the state-citizen relationship in mind, it doesn’t have much to say about employers, educational institutions or social media.

Free speech generally refers to public spaces or public speech. The court may have ruled that you can wear whatever armbands, slogans, or flag you want without the government (or a school) tearing it off your body, but it doesn’t consider dress codes or other workplace codes of conduct, including behavior, to be limits on your personal freedoms. That is, the First Amendment doesn’t guarantee your right to say whatever you like or do whatever you want within the workplace itself.

There are, however, some forms of speech which are firmly protected in the workplace. But this protection doesn’t flow from the Constitution, it is entrenched in labor laws.

Employers have broad rights to restrict your freedom of speech and expression in the workplace. Again, that’s because your fundamental rights were formulated as freedom from government interference, not freedom from an employer or social standards. Employers are well within their rights to require you to dress a certain way, or to ban certain topics or forms of speech from the workplace. Basic workplace codes of conduct require a certain standard of dress and professionalism

But most codes of conduct go beyond that, banning discriminatory, hostile, or retaliatory speech and behavior. That’s not just to ensure professionalism and positivity in the workplace, it’s also to avoid creating a hostile work environment, for which they can be legally liable. A hostile work environment, though, doesn’t mean that it’s upsetting; it’s one in which abusive behavior is intentional, severe, recurring or pervasive and interferes with employees’ ability to perform their job

However, there are some limits on how employers can restrict your speech. The National Labor Relations Act (NLRA) sets out these limits. Like the First Amendment is designed to layout freedom from government oppression, the NLRA is designed to curtail oppression by employers. Instead of the citizen-state relationship, it’s concerned with the employer-employee relationship. Section 7 of the NLRA prohibits employers from limiting their employees’ ability to criticize their work environment and conditions, freely discuss wages and other benefits and organizing a union. These are what Constitutes protected speech in the workplace.

Employers who fire or retaliate against workers who criticize workplace policies, compensation packages or even work towards creating a union are in violation of the NLRA.

But What About Google Guy?

James Damore and his supporters may not see it that way, but Google was within its rights to fire him. Damore’s memo details his theories about evolutionary psychology and the relative intellectual and emotional strengths of different genders and races. It also contains a lengthy criticism of Google’s diversity hiring programs and its attempts to level the playing field in terms of compensation, promotion, and opportunity.

While Damore was well within his rights to criticize his working conditions and discuss the company’s compensation packages, he crossed the line in terms of how he discussed the basic worth of his coworkers and of people generally. And he crossed that line while using company resources, on company time. His comments not only violated Google’s workplace policies they also opened Google up to potential liability for fostering a hostile workplace. Damore could have posted his memo on a personal blog with no consequences aside from a mountain of hate mail, but sharing it at work and presenting it as a kind of policy recommendation, is something else entirely.

So the next time someone gets in trouble for being deplorable on social media or sending nasty emails to their coworkers, think twice before decrying it as a limit on freedom of speech. Instead, consider whether those actions violate workplace codes of conduct, may create a hostile work environment, and if they can be considered protected workplace speech.