4 Reasons Disruption Shouldn’t Be Your Purpose 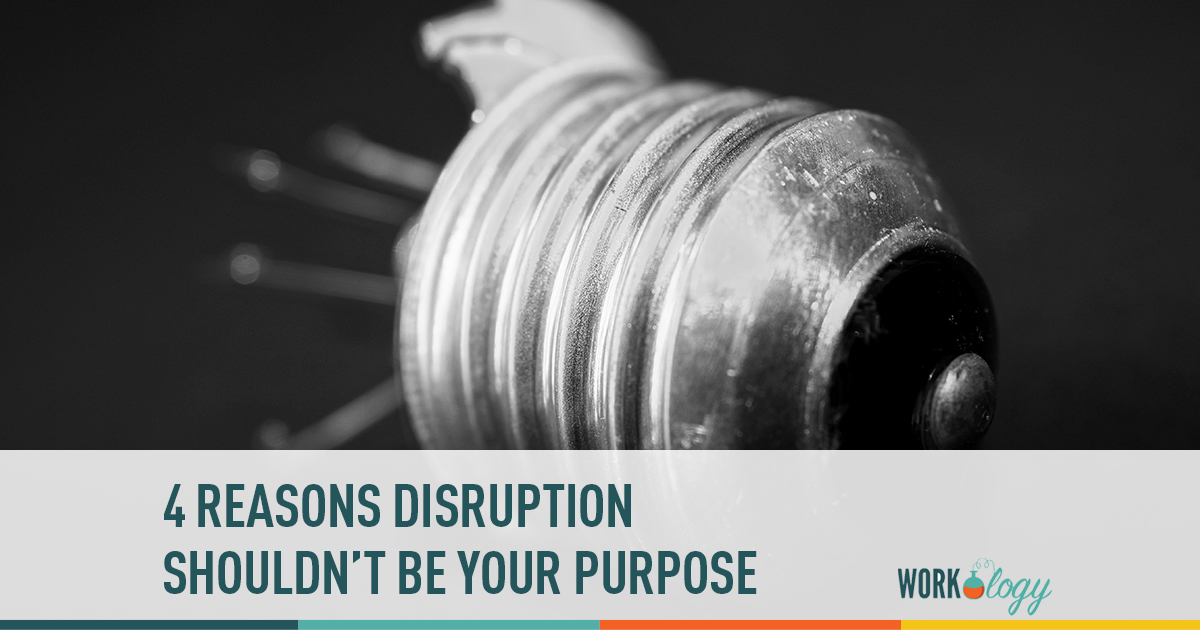 Unless you’ve been living under a rock for the last few years, you’ve probably been inundated with the information about the concept of “disruption.” According to this new movement, disruptive forces are absolutely everywhere, doing almost universal good. I embrace change more than most people, but the ubiquitous calls to “disrupt” just make me want to erupt—in protest. Such movements, especially in HR, are rarely helpful and they seldom deliver.

Disruptive forces have been around since the inception of modern commerce. They have played a key role in the creation and sustainability of enterprises. They have driven significant shifts in the way consumers act and live. Think back to Sears, Roebuck & Company, which pioneered the mail order catalog in the 20th century. People could order everything from it, from a new frying pan to a new house, and have it delivered by the postal service.

The Sears catalog was its era’s equivalent of Amazon, and it just as dramatically disrupted the merchandising status quo. If not for that venerable company’s various missteps over the years, we might still be getting all of our consumer goods from Sears—its online catalog, of course—instead of same-day drone delivery from Amazon.

Uber is another example: without its disruption of the taxi industry, we would still be hailing cabs on the street instead of using our phones to get a ride.

Like consumer goods and services, HR is also susceptible to disruptive forces. We’ve seen the advent of automated HR processing, strategic divisions in the profession, the rise of subspecialties (talent management in large enterprises, for instance), and new-age meeting groups (such as the aptly named DisruptHR). My job is to track trends in HR and assist in the evolution of the profession, to ensure that we’re all working toward better practice. I embrace change and welcome technological revolution. (I’m the guy who waits in line for every new iPhone.) I have personally been involved in building buy-in for several seismic HR change initiatives over the course of my career.

But are disruptive movements in business truly rooted in better HR practice? I think not. And now I’ll erupt with some specific reasons:

Disrupt With Me, Not Against Me

We are all in competition for resources to sustain our enterprises. In HR, we are also in competition with other disciplines. Many would-be disruptors act without HR involvement. Moving in on other people’s turf is a part of life, but things can go more smoothly when change incorporates the perspectives of those who will be affected by the change.

The Potential for Error Is Too High

If we’ve learned anything from the big data revolution, it’s that actions can result in unintended consequences. Disruptive movements in HR that do not account for the human perspective magnify the potential for error. For instance, data scientists might approach talent issues without considering employment laws; later, HR might use that data to make hiring decisions that violate those laws. Another example is automated performance management processes; if the technologists making such advances do so without input from HR, they might ignore the context for such automations and the perspective of the end user.

Did You Join Because “Disruption” Sounds Cool?

Trends and movements can fail or backfire. Joining a group of HR disruptors is admirable only if it can make a substantial difference. Otherwise your participation amounts to no more than networking. The goal of networking is the expansion of potential job opportunities. If your mission is to disrupt your current employment situation, then you can accomplish it by joining the cool disruption movement. If your mission is to change the way you practice HR, you can accomplish it better by pursuing professional education and development.

There’s No “There” There

The focus of many new movements is often on “forming, norming and storming,” but seldom on performing. Too often, so-called disruptive HR events follow a distinctly non-disruptive playbook. You’re promised an experience that will change your world forever!—at the very least provide you with some valuable insights—and all you walk away with are a bleak picture of the future, no real plan, a few business cards and a less-than-stellar meal. Why do so many meetings of HR “disruptors” feel like condo timeshare pitches?

Lastly, I take issue with the “disrupt” movement because it makes me feel like a crotchety old man yelling at the kids these days to get off my lawn. My distaste might be ameliorated if the concept was really couched in innovating and advancing rather than simply disrupting. There needs to be some agreement on the true meaning of each “next big thing,” its objectives, and how it will effect change. Until then, I’ll just sit here in my rocking chair . . . about to erupt.

Tell us about your experiences. How have disruptive business movements affected you and your organization? Has disruption made day-to-day operations more efficient? What would you like to see from these types of movements?

This piece was originally published on the SHRM Blog here. Its author, Alex Alonso, PHD, SHRM-SCP is the Senior Vice President for Knowledge Development at SHRM.