Insourcing or Outsourcing: Which Is the New Staffing Trend? 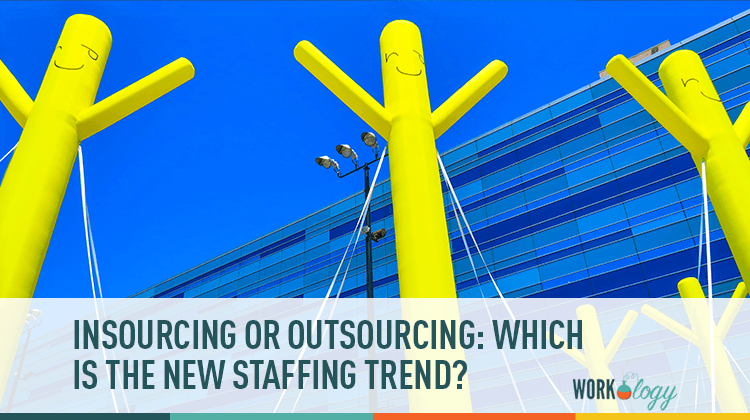 Outsourcing”, also known as “offshoring” has been one of biggest trends of American business in the last several decades. It is even discussed in the SHRM certification materials as an area HR students need to understand. However, due to a number of reasons that trend is changing. A well-known futurist even says “insourcing” will become the next big macro trend in business and will drive many changes.

A June 2013 issue of The Economist and the December 2012 issue of The Atlantic both discussed article the reversal of the offshoring phenomenon started by Jack Welsh of GE. In fact it is being changed by GE, only this time led by Jeff Immelt. Immelt is even quoted as saying it was “yesterday’s model.” The articles said there are several reasons driving the reversal. These include:

Political- Politicians are tired of getting beat up for letting jobs exit the U.S. The perceived loss of jobs had a rallying effect at the ballot box. I say “perceived effect” because the article said that offshoring really didn’t have as much impact as people thought. They said more jobs have been lost to software as to foreign workers. But the perception of loss to foreign workers is a powerful image.

Economic- Changes in high technology have made the allure of cheaper labor in other countries less attractive. Additionally, in many of these countries the labor is not as inexpensive as it has been in the past. The time savings in shipment of products is another reason. Having inventory in the pipeline to cover for two months of shipping time is expensive. The quality of product is another. Companies are finding collaboration between companies helps offset cheaper labor. Also because of automation the labor component of the formula is no longer as big. In many cases the reason many U.S. companies continue to have facilities overseas is to be close to emerging markets as opposed to labor savings.

Insourcing will be the next major Recruiting Trend!

Futurist Thomas Frey has said that “insourcing” will be a major trend in the future. He identifies a number of reasons. I am going to focus on the reasons that are HR related. These include:

Unions have been forced to face reality. Very high wages made business disappear in the past. Subsequently many, such as the unions at GE, had to accept a two tier wage system. (This means that newer workers come in at lower wages than legacy workers.) As Frey says “70 percent of the jobs there are on the lower tier, which starts at just over $13.50 an hour, almost $8 less than what the starting wage used to be.” This, coupled with wages in China now being five times higher than they were a decade ago, convinces companies to have work in the U.S.

American businesses have become much more efficient. Between automation and robotics American workers have had to become more effective and efficient. Frey says “U.S. productivity continues to find gains through efficiency, and labor costs have become a smaller and smaller proportion of the total cost of finished goods. It’s far more difficult to save money by chasing wages anymore.”

In today’s market U.S. companies have to be more responsive. The combination of how quickly products need to get to market and the distances they had to travel has made responsiveness a necessity. I think many people have also gotten tired of poor products from China. This has led to an increase in what Frey calls American craftsmanship. “Engineers who work directly with manufacturing personnel are able to build a far better product. In one example…a design team was able cut the work hours necessary to assemble a water heater from 10 hours in China to two hours in Louisville, KY.

Frey concludes “Look for ‘insourcing’ to be a long term trend. It certainly won’t work in all industries, and it may not even work in most. But the playing field has shifted, and those who aren’t paying close attention may soon end up as little more than a footnote in the annals of business history.”

As an HR professional here are some things you need to consider:

Once you have done that you will be much better prepared to handle the HR aspects of this change.