The Art of Corporate Deflection 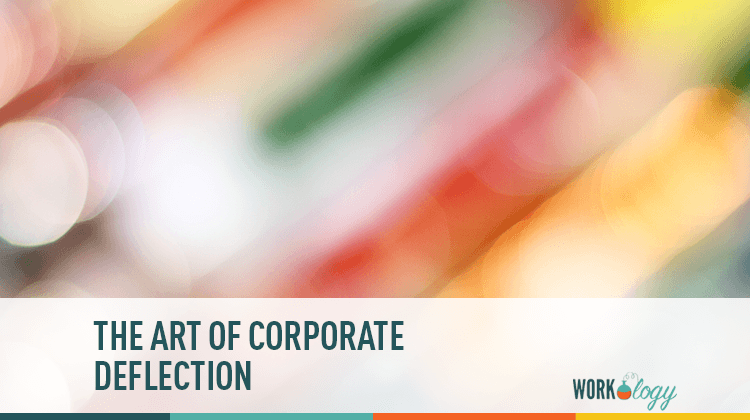 In the corporate world, the art of deflection is a trait that unfortunately one must possess to be successful.  Deflection is described as a military tactic and technique of shooting ahead of a moving target so that the target and projectile will collide.  Deflection is also a term used in engineering to describe the displacement of a structural element under load.  Deflection is passing the buck, throwing one under the bus, shifting the blame or direction to another individual, department, vendor, or team member.  Basically blaming anyone other than yourself that is available.

The Art of Corporate Deflection

Corporate deflection and the art of deflection involves a combination of skill, intuition, and often times thick skin.  Because in the corporate game of deflection not just your reputation but your livelihood, your survival, and your paycheck is at stake.  I first experienced being used as a deflection mechanism early on in my professional and human resources generalist career.  As the human resource manager at Target, I was responsible for creating the store’s employee schedule based on sales forecasting, previous customer histories, and manager requests.  My store management team alternated working weekends, and there was a significant increase in the number of call ins, absences and no shows on the weekends myself and my store manager did not work.

And so I became the scapegoat for the first time in my professional career, a situation for which I was not prepared.  The blame was squared placed on myself as two very aggressive and angry managers deflected the blame to me.  In their eyes, I was in the wrong having scheduled inappropriately or my team failed to input time off requests or schedule changes in a timely manner.  I worked to defend my position quite surprised at their point of view.  Because it was clear to me the blame lay squarely in their management and leadership styles in motivating their teams in a positive and fun manner.  I mean really.  The staff even nicknamed one of those managers Hitler for his very abrasive and angry motivational techniques.

It was there I learned that people don’t like to hear they suck, have faults, or aren’t the people or leaders we believe we are to be.  We hate to find faults in ourselves.  Deflection serves as a mechanism and is a natural state of being.  We don’t like hearing we suck.

Corporate deflection manifests itself most commonly in office politics, water cooler conversation, and blind copied emails.  I remember the first time that a boss tried to take credit for an idea I shared with him.  I promptly called him to the carpet via email wanting to succumb to the corporate bullshit that was my life as middle manager HR.  Looking back I’m surprised I lasted as long as I did among the deflection filled corporate trenches.  Working for myself was really my only option.

I waited and bid my time as the Target manager Bobsy Twins continued to throw me, HR under the bus.  Filed and stored every email, paper documentation, focus group meeting, and employee absence until I was ready.  Nearly 12 weeks had passed, and I was able to establish without a doubt a pattern was afoot.  Scheduling a meeting with my boss, I presented my findings based on scheduling trends, focus group meeting notes, and exit interview data.  I deflected back and with enough spreadsheets, pie charts, and bar graphs to make the Bobsy Twins give a collective sigh while I watched the steam leave their ears.

I had deflected the deflectors.  The problem wasn’t my team and our employee scheduling at all. Threats, yelling, and angry managers don’t make for a motivated, engaged or present workforce.  And the numbers didn’t lie.

Certainly, I didn’t make any friends that day, but I learned a valuable lesson.  Not everyone is like me as an individual, human being or manager.  Human beings when forced with a choice between good intensions and job security make what they believe in their mind is a necessary decision to protect themselves above all else.  I learned a valuable lesson in the corporate art of deflection and politics.