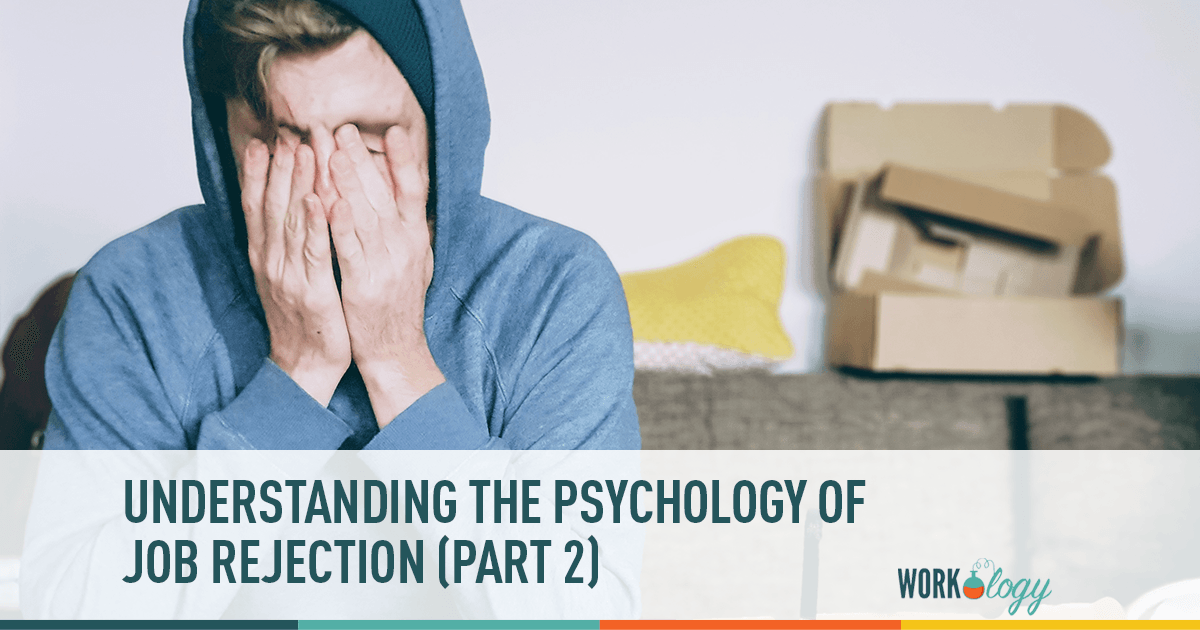 This is a two part series on job rejection psychology. Click here for Part 1.

Some job rejection is a normal part of even the most successful career cycles, but what about those workers who experience longer periods of rejection? When the job search stretches on with no end in sight, are there repercussions beyond the financial?

Many psychologists believe so and as more workers are experiencing it, being able to understand the effects of long-term job rejection is essential, since many of the candidates you interview may be experiencing some of the fallout.

The Loss of Status

Among the not-so-easily-named effects of long term unemployment, and job rejection, loss of status ranks high. We all recognize that status is a contributing factor in over-all feelings of success and satisfaction in life but it may be much more. Mark Van Vugt, PHD, in his Psychology Today article subtitled, “The Titanic Effect and why Oscar award winners live longer” points out that among Hollywood actors, those that have won an Academy Award for acting live on average four years longer.

While this may be anecdotal evidence, it points to an idea called Status Syndrome, or, as he calls it, the Titanic Effect. Studies have shown that throughout history people with higher societal status have lived longer healthier lives. One factor is obviously that money allows for the best diet and healthcare, but, even primates with no economic structure, such as baboons, exhibit similar life expectancies. Those who rise to prominence typically live longer, healthier lives, while those at the bottom of the tribe, tend towards illness and early death.

Loss of status through job rejection and long-term unemployment is a blow to the human psyche. The loss of social relationships, circles of influence and the feeling of making a meaningful contribution can lead to negative thought patterns. This in turn can affect health, leading to depression and serious medical conditions. The effects are not always readily apparent, but they can be quite serious.

While job rejection in the short term may not make one a social pariah, long term unemployment can, at least in the mind of the unemployed worker. Loss of daily contact with coworkers, embarrassment, shame, and inability to engage in normal social circles due to finances can all play a role in unemployed people’s tendency to withdraw socially.

In the beginning, friends and coworkers understand and will often try to help their friend maintain a normal social life, but after months or even years, it becomes difficult to maintain those ties. Since shame and embarrassment play a huge role, those who are long-term unemployed often beg off, rather than let friends continue to pay. This eventually leads to the friends feeling some rejection and an eventual drifting apart.

John L. Manni, Ed D, suggests that people dealing with job rejection and long term unemployment find others to spend time with. The social interaction, it turns out, is a vital link to health and human sanity. Not only that, but an active group can provide volunteer services, allowing them to contribute to society in a positive way and possibly regain some of their lost status.  You can read more about it in his article on Psychology today.

Getting a Handle on it

When job rejection and unemployment seemingly become a way of life, it is easy to assume that it is not going to change, and that any change must come from outside yourself. After all, you have done your part and it hasn’t worked.

No matter what the circumstances there are always at least two things you can change without help from the outside, according to John L. Manni Ed D, your thoughts and your actions. It is easy to become so focused on the search for employment that we give up on the rest of life. Manni suggests that job seekers should find ways to keep busy doing things they enjoy, such as exercising, gardening and reading.

This not only fills the time and wards off depression, it will also improve your mood so that when the right job interview does come along, you’ll be ready to put your best foot forward. By focusing on positive actions, you can encourage positive thoughts. One way to accomplish this is to spend some time each day doing something that helps someone else. Even something as simple as driving your kids to school every morning can give you a sense of purpose and make it easier to focus on positive thoughts.

This is a two part series on job rejection psychology. Click here for Part 1.