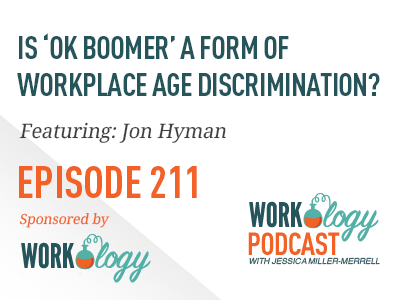 Have you hear the phrase Ok Boomer? It seems to be everywhere on social media, on the mouths of kids and especially Millennials and recently it has found its way into the workplace.

Earlier this month, nationally recognized author, speaker, blogger, and expert on employment and labor law, Jon Hyman posted the following question on LinkedIn: Is “OK Boomer” evidence of age discrimination? The discussion that followed was fascinating and tracked out to other online communities (see our show notes for a link to the original discussion). Because Jon’s question was based on a blog post he wrote (also in the show notes) about Chief Justice Roberts posing this question to the plaintiff’s counsel during oral argument, and this is rapidly turning into a hot button issue.

The court case that addresses Okay Boomer as a form of age discrimination in the workplace is listed in the resources section below. And outside of our guests LinkedIn thread where we discussed the topic, I also chimed in on another social post within a 40,000 person Facebook group for job seekers where I was met with snowflake gifs like the one below that told me and others to lighten up.

Are we taking this fun workplace banter too far? Could Okay Boomer be a form of age discrimination at work? I talked to Jon who shares his experience on the subject.

The workplace isn't a locker room. It's not a playground. It's not a rec room. It's a place of business. Whatever that business may be. And it should be treated as such. - @jonhyman #hr #okboomer #humanresources Click To Tweet

What is Workplace Harassment?

I asked Jon because outside of HR, the definition of what workplace harassment is defined as is a concept that many struggle with including those within the large job seeker Facebook group I mentioned earlier in my podcast interview.

Jon says, “Workplace harassment or a hostile work environment can be created one of two ways. It’s either offensive conduct and has to be offensive conduct based on a protected characteristic.” He goes on to say that in the case of Okay Boomer, the protected characteristic is age. Other protected classes include sexual orientation, religion, race, and gender to name a few. The harassment was created as a result of increased comments. Jon says the conduct in order for the situation to be considered ridiculously offensive in one utterance, it needs to alter the terms of conditions of employment and create a hostile work environment.

For these actions to be considered to create a hostile work environment the conduct should also be pervasive is doesn’t rise to that level of severity mentioned above, but it happens over and over and over again. This behavior could be demeaning comments told repeatedly to targeted at members of one particular class or another. And in this case an employee repeatedly receiving the Okay Boomer meme in his email and/or other employees repeating the phrase repeatedly in the course of conversation.

Okay Boomer Is a Form of Workplace Harassment

According to Jon, it depends, and I think most of us working in HR can appreciate his response because almost never are any workplace investigations ever clean cut or straight forward. There are always situations and circumstances along with case law and employment law that we need to consider before making recommendations on how businesses should take action after a workplace investigations including fun gifs and memes about Okay Boomer.

I highly recommend taking the time to read Jon’s original blog post and the LinkedIn discussion (see the show notes for links). This has been a fascinating discussion and I think it says a lot about how next-generation employees treat Boomers (and Gen X, and in the not too very far future, Millennials as they are approaching 40) define generational differences in the workplace. I appreciate Jon’s willingness to not only open the discussion, but to share his thoughts with us today.

Connect with Jon Hyman on LinkedIn.