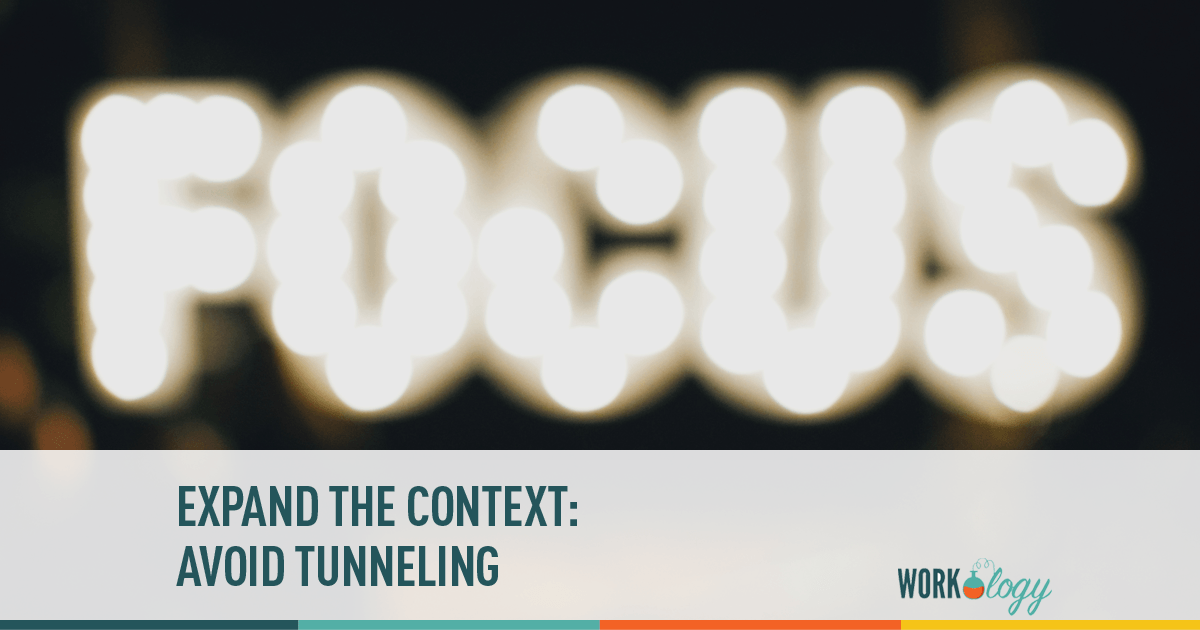 If you’re involved in a misunderstanding or need to solve a pressing problem, take a deep breath, blink a couple of times and take a fresh look at the larger context. Often, this expanded view can lead to a much simpler pathway through an issue.

I was reminded of this recently when I was talking to a tech support person for my computer and we were waiting for it to reboot. He said that so often, people will call in desperation because their computer had lost power and appeared dead. It’s his job to keep the bigger picture in mind, including asking if the computer is plugged in. Very often, it isn’t. This is an easy fix for a problem that could have taken hours to try to solve, unsuccessfully.

The tech support didn’t fall into the trap of tunneling. Tunneling happens when you have an intensive focus in a very narrow area. This can be good for some things, but only if you already have the larger picture and know exactly where the tunneling can be effective. When tunneling is done without a high level overview of the context, it can lead to a lot of wasted effort and disconnection with others.

Tunneling can be triggered when emotions and reactions are running high. The threat of chaos can activate a hyper-focus in order to create a sense of control. You can often see this with people who are perfectionistic or those who unleash their inner nit-pickers onto someone else’s work. They lose sight of the bigger picture and keep pushing along a tight, narrow track. The good news is that shifting to an expanded context will help offset this immediately.

To expand to the big picture, you have to look around, get the lay of the land and take notice of what it is that surrounds the situation you’re dealing with. For example, let’s say you’re having a conversation with someone who seems to be really upset and is unusually irritable. You could lock in on the details, the content, and the smaller picture of what the person appears to be upset by. This could lead you down a rabbit hole of misplaced effort, especially when the other person is “off” right from the beginning.

An alternative would be to wonder what might be going on with this person today. What else might be going on? Why are they are so upset? A simple question about how they are doing, or reflecting back that they seem more upset than usual, might lead to information that they are in the middle of a family crisis, or just received some bad news. This would change the nature of the conversation entirely.

Expanding the context, or looking through a larger frame for the issue, will help you take in a different kind of information. The context changes everything and will help you assess what issues really need your attention.

It’s hard to expand your perspective if you’re too invested in the perspective you have, or are too attached to being right. It takes courage to say, “You know, this may not be the best direction. Let’s step back and take another look.” But by doing so, you have a much better chance of getting on track and staying tuned to the reality of what is actually going on. This is always more important than being right.

By pausing and expanding your view of the context you’ll gain clarity and connection with reality. Often it will create a simpler and more effective pathway, even through complicated territory. And when you make decision from an expanded perspective you’ll make wiser and smarter decisions.

Have you ever found yourself tunneling or getting lost in details that threw you off track? What was it that helped you shift your perspective?

Barbara Bouchet is President of Contact Point Associates and author of "The Enlightened Edge for Leaders: Ignite the Power of You." She coaches and trains leaders and teams to expand, transform and take delight in their work and life. Connect with Barbara.