Entry-Level Driver Training Problems in the Trucking Industry: a Must-Read for Logistics Recruiters 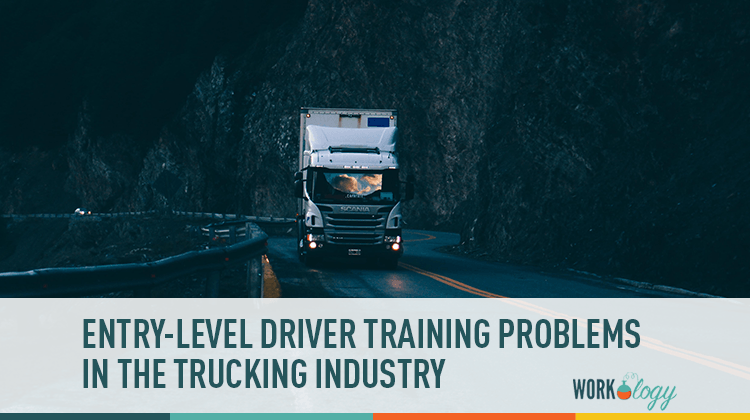 To the uninitiated, truck driving seems like a dream career. You’ll get to see the world through the windshield of a truck cab; you’ll never have to submit TPS reports or other such nonsense to an uncaring middle-management boss in an ill-fitting suit; you’ll get to make your own hours and are ultimately in charge of your own career destiny.

But the reality is more complicated than that; being a good driver isn’t as simple as hopping in the cab and hitting the road. Truckers are held to high standards and must meet difficult delivery deadlines, all while traveling safely in a host of weather conditions, ensuring the security of their loads and maintaining accurate driver logs in order to support fleet management records.

For these reasons—chief among them the issue of safety—it’s important that entry-level drivers receive adequate and extensive training before being turned loose to fend for themselves on the highway. But there are numerous factors affecting the driver training industry resulting in under-trained, inexperienced drivers being handed the responsibility of driving long before they’re ready.

According to veteran truck driver and founding member of REAL Women in Trucking Sandi Talbott, trucker training programs are receiving government funds—in the form of Pell grants, MAP-21, the Workforce Investment Act and other educational legislation—for each student admitted. This gives the programs’ owners incentive to recruit as many students as possible—up to 200 entry-level drivers each week—and to move them through the program as quickly as possible.

This, of course, can result in inexperienced drivers being put out on the road long before they’re ready. In Talbott’s statement, she said, “In our weekly group we have come in contact with student drivers who are put out on the highway with as little as two weeks’ experience, and they are running freight even though they feel they are not prepared to do so.”

The Federal Motor Carrier Safety Administration (FMCSA) doesn’t offer any statistics pertaining solely to 18-wheelers, but in 2010 there were 67,000 crashes involving large trucks or buses that resulted in injury, and a total of 106,000 people were injured. Obviously, highway safety is something that needs to be addressed and taken seriously, especially by those companies claiming to train drivers for safe and lucrative careers.

One of the most important factors contributing to highway safety is drivers’ training and knowledge of procedures like parking and backing up, as well as how to properly maintain a manual or electronic logbook. They should also be given a solid base of knowledge in areas like how many hours they can legally drive per day, HOS Regulations and when and where they can park for overnight rest. Also, drivers who are properly trained to begin with are more likely to stick with their career choice long-term.

A closer look needs to be taken at the direct correlation between the haste with which new drivers are rushed through training programs and the government funds received by these programs and their parent organizations. Perhaps in time, it will become apparent that some changes need to be made. The ultimate goal, of course, is for the best driving candidates to be chosen through a more selective process, and for those candidates to be properly trained and tested before being put out on the road.

What do you believe the biggest challenges are?