Religious Accomodation: Sometimes You Have to Read Between the Lines 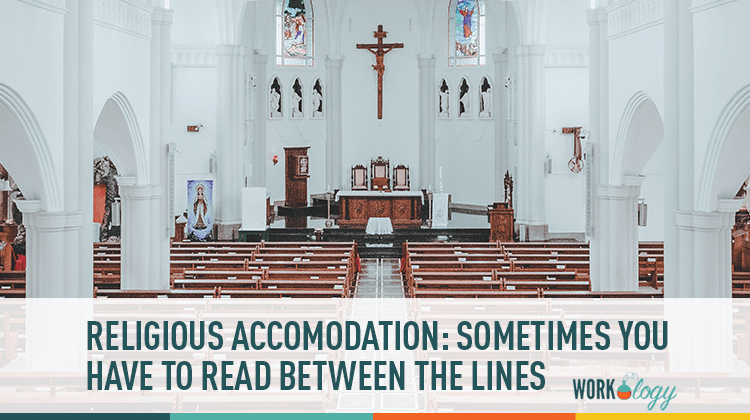 In HR we a lot of attention to the ADA and the accommodation process, or at least we should. There is one area that is often overlooked in the area of accommodation and that is with religion. There are several things that need to be accommodated and sometimes HR has to read between the lines to determine what is needed.

According to the EEOC:

The law requires an employer or other covered entity to reasonably accommodate an employee’s religious beliefs or practices, unless doing so would cause more than a minimal burden on the operations of the employer’s business. This means an employer may be required to make reasonable adjustments to the work environment that will allow an employee to practice his or her religion.

This includes schedule changes and making staffing adjustments, but cannot include segregating the work place on the basis of religion. In other words, you cannot have one whole department staffed by one religious group for the sake of having them work together and not with others.

The accommodation in religion also extends to how an employee may be dressed. The EEOC says this applies:

to such things as dress or grooming practices that an employee has for religious reasons. These might include, for example, wearing particular head coverings or other religious dress (such as a Jewish yarmulke or a Muslim headscarf), or wearing certain hairstyles or facial hair (such as Rastafarian dreadlocks or Sikh uncut hair and beard). It also includes an employee’s observance of a religious prohibition against wearing certain garments (such as pants or miniskirts).

Accommodation can extend beyond the “normal”

While generally an employee will specifically reference a religious need for an accommodation sometimes they don’t and this is where HR as to be able to read between the lines. A recent case provides an example. A Nigerian employee’s father died and as the eldest son the employee had the obligation to lead the funeral ceremony. It required his attendance because the rites and traditions required the eldest son to make animal sacrifices in order to safeguard the family. Not conducting these rites would result in “death to the children” in the family. The employee requested five weeks of leave to make the trip. He did so in writing, twice, and was denied. He left anyway. When he returned he found he had been terminated and as you can guess he sued.

The company said that it would have caused the company undue hardship and that was the reason for termination. A lower court agreed with the employer but an appeals court rejected that and said this case must go to trial.

Facts that this cased hinged on

Undue hardship is certainly a valid reason for accepting an accommodation. It is what is involved in making a determination of “reasonable accommodation.” But in this case the employee was a material handler, a position that was frequently staffed by temporary employees. So the court did not agree with the company’s definition of “undue hardship.”

Additionally, although the employee had not specifically referenced “religion” in his leave request the court found that a reasonable jury could certainly find that in the employee’s letter’s multiple references to spiritual activities and the potential consequences in the afterlife provided sufficient notice that the employee was making a religious request.

What this means for an employer and an HR department is that sticking to the letter of the law may not be sufficient. You have to delve into the situation and decided what the employee is really asking for. They do NOT have to specifically use official language to make a request. HR also has to make sure that the reasons for rejection are true valid reasons for rejection of the accommodation and not just lip service. In this example the “undue hardship” was neither undue nor really a hardship.

If you would like to read specifics of the case I refer you to Thou Shall Accommodate: Funeral Leave as a Religious Accommodation Under Title VII written by attorney Matthew Hoyt of Baker Hostetler.

What do you think is a “reasonable accommodation”?