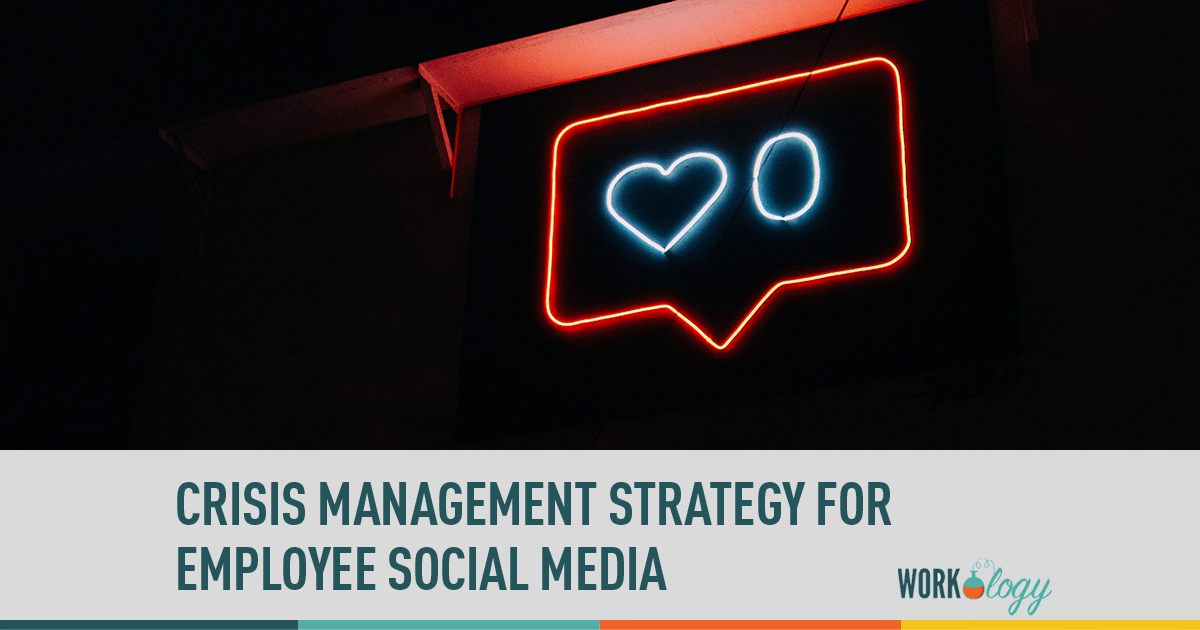 I’ve long said that social media changes everything especially in the context of work and the employment world.  Human Resource professionals, as well as CEOs can no longer travel from location to location to speak individually with employees who are being laid off.  Company announcements, lay offs, terminations, and downsizing news are now tweeted, texted, and Facebook shared at every and any moment.  Corporate privacy and company secrets are no longer protected but shared and at a rapid pace.  Human Resource professionals and business leaders must assume that every meeting, email conversation, or communication both verbal and electronic are being recorded, live tweeted, or streamed for public consumption. Companies and HR teams must be prepared with an employee crisis management strategy when it comes to social networks.

There are hundreds of case studies and examples, every single week, that fill our news feeds of stories of employees who mis-spoke and its forever recorded courtesy of the internet, but what about a good old- fashioned iphone mp3 recordings?  Those too.  No social media policy can protect you from this fact.  Long after your company video or memo has been leaked on Twitter, the damage has already been done.  A social media policy can’t protect you.

A media shit storm  (AKA employee social media crisis) has befallen a very small, 200-employee company by the name of Tate Publishing.  They are a very religious, Christian organization which this week came under fire for the manner in which they handled how their employees were discussing rumors that their company was offshoring their business to the Philippines.  Employee concerns were discussed on Facebook, company email, and other social media.  It was discovered that one anonymous employee even went to the local press.  The CEO, Ryan Tate, determined to smoke out the media mole, gave employees the opportunity to come clean until a meeting scheduled for Thursday, May 31st, 2012, or employees – even those not found to be involved – would be fired, at will.  At the end of business on Thursday, twenty-five employees were let go because of the disclosure of rumors and conversations.

The 17-plus minute meeting, which is available to listen below, was recorded by an employee, who was present at the meeting, on their mobile phone.  It was then shared with a reporter at a local business newspaper here in Oklahoma, who uploaded it to a social sharing site and then distributed via the social web.

The employee meeting begins with a prayer.  Being a Christian publishing company, I guess I understand their purpose, but nonetheless religion is always a tough topic when it comes to work.  He shares with his staff that he’s a lenient boss who even allows employees to view videos on work computers, as well as accessing Facebook at work.  Life is good for an employee at Tate Publishing . . .  until now.

Employees are ‘stupid’ according to the CEO who adds that ‘they’ employees are also morons.  They don’t understand the word ‘outsourcing’ and blah, blah, blah.  The employee who contacted the media was given the opportunity to come forward and admit their guilt.  Except their silence will lead to the entire department being punished.  “Twenty-five people will lose their jobs today,” said Tate.

HR Should Have a Voice in Employee Crisis Communication

The sad fact is that Tate Publishing actually employs an HR Director according to their corporate site.  I’m not aware of the capacity of her involvement in this meeting or their decision, but if it had been me, I would resign immediately.    Tate ends the meeting in ridiculous fashion, telling the terminated staff that he loves them and will pray for them while holding back tears.  The twenty-five fired employees will be notified and paid by the end of the business day.

The meeting is ridiculous and insulting as the actions are by the CEO, except that is not the full story.  The recorded meeting was shared with a member of the press, and the story hit the local news with the topic hitting every desktop and email inbox through the power of viral and social media.  Adding insult to injury, a parody Twitter account has also been created, @taintpublishing.  You can see one of their tweets above.  This unfortunate case study and example demonstrates that companies must have a emergency social media and communication strategy in place, knowing that it really only takes one employee to share a recording, video, or insights into a private company meeting, with little means to track the company mole because of the availability of  technology and social networks.  Excep,t I can’t blame that employee.  I’d record that meeting, too.  The CEO is a ridiculous tyrant who is out of touch with the situation and his employees.

How Should Managers Manage Their Emotions?

But more importantly, managers sometimes do irrational things based on emotion and living in the moment.  These things tend to get companies in trouble.  I believe this was one of those moments, and that moment has come back to bite them.  Locally, this now 175-person company is tainted, losing not only business, but credibility and respect from the community that it has served for many, many years.

Do you have a crisis management strategy in place when it comes to social media?  How do you handle a hot-headed boss CEO who bases his decisions on emotion in your role as supportive company leader or even the HR Director?  What would you do?