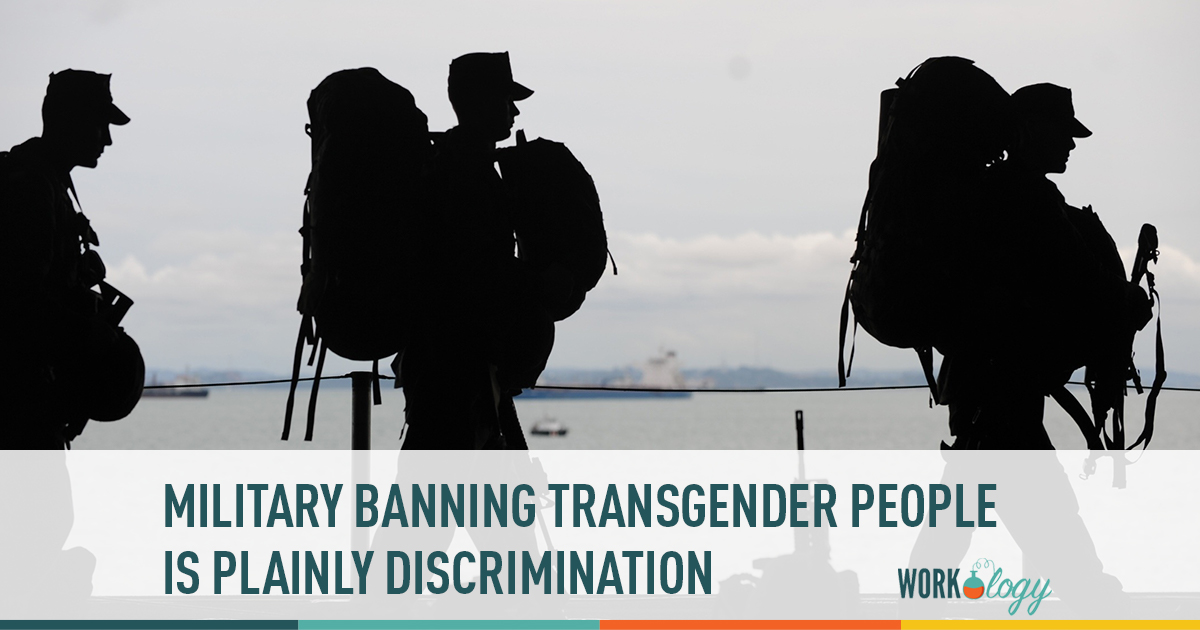 This morning President Trump announced that he was banning transgender people from serving in the US military, even in support roles. He says that although the announcement came via Twitter, it wasn’t one that he came to casually, but rather, only after consultation with his generals.

After consultation with my Generals and military experts, please be advised that the United States Government will not accept or allow……

….Transgender individuals to serve in any capacity in the U.S. Military. Our military must be focused on decisive and overwhelming…..

….victory and cannot be burdened with the tremendous medical costs and disruption that transgender in the military would entail. Thank you

This decision permanently halts a process put into place by Obama’s Defense Department, which would have seen transgender people able to serve openly in all roles. That means throwing out years of work, trying to shift military culture and bureaucratic norms. But more troublingly, both for service members and the armed forces as whole, it means losing thousands of transgender soldiers and support staff. It likely also means that military justice resources will be diverted from investigating crime and other wrongdoings, to investigating gender identity.

According to President Trump, the reason for the ban is that “[o]ur military must be focused on decisive and overwhelming victory and cannot be burdened with the tremendous medical costs and disruption that transgender in the military would entail.”

Secretary of Defense Mattis went on to say that he could not support transgender people serving in the military because it would, somehow, reduce the lethality of the armed forces. “Since becoming the Secretary of Defense, I have emphasized that the Department of Defense must measure each policy decision against one critical standard: will the decision affect the readiness and lethality of the force? … [H]ow will the decision affect the ability of America’s military to defend the nation? It is against this standard that I provide the following guidance on the way forward in accessing transgender individuals into the military Services.”

But this logic, that welcoming transgender people into every part of the US military would be a distraction, doesn’t hold up. Diversity is only a distraction for bigots and bigots are always a liability. Consider the years of time and resources wasted on upholding previous service bans, like Don’t Ask Don’t Tell. Consider too the impact of organization-approved bigotry on closeted service members, their families,  young people questioning their gender identity or sexuality, and every straight, cis service member whose worst impulses were catered to and whose ignorance was cultivated.

A 2016 Rand Corporation study showed that allowing transgender people to serve in the US military would have a “negligible” impact on finances and positive impact on organizational culture and unit cohesion. According to Rand, other militaries have successfully integrated transgender people and been the better for it. Their recommendation was that the Department of Defense take a look back at previous service bans and how little negative impact the military experienced when those bans were lifted. Has allowing gay and bisexual people to serve made the military less “lethal” or combat ready? Are women really the distraction that so many military leaders once called them?

Diverse teams are more effective teams and learning to work with people who aren’t just like you makes you a better person. Service bans reduce the strength of the military and are fundamentally unjust – they are, plainly, discriminatory, and provide an excuse for treating banned groups like second class citizens elsewhere. And in addition to allowing service members to wallow in bigotry rather than encouraging them to grow as people, the ban is aimed at denying transgender people rights and access to services in the military and beyond.

It’s impossible to separate the President’s tweets from the ongoing ACA repeal/replace process, the nasty rhetoric that sets healthcare for transgender service members in opposition to military procurement, and the retraction of protections for transgender citizens all over the country. In recent weeks, for example, critics have complained that funds that went to Chelsea Manning’s transition should have been spent on buying new jets for the Air Force – even though estimated healthcare costs for all transgender service members and employees would be a fraction of a fraction of the cost of operating one aircraft carrier for one month. In fact, it’s closer to the cost of operating one aircraft carrier group for one day. One small drop in the rather large bucket that is the budget of the world’s largest employer.

There is no basis for this ban that is not simple bigotry.