How to Increase Workforce Racial Diversity 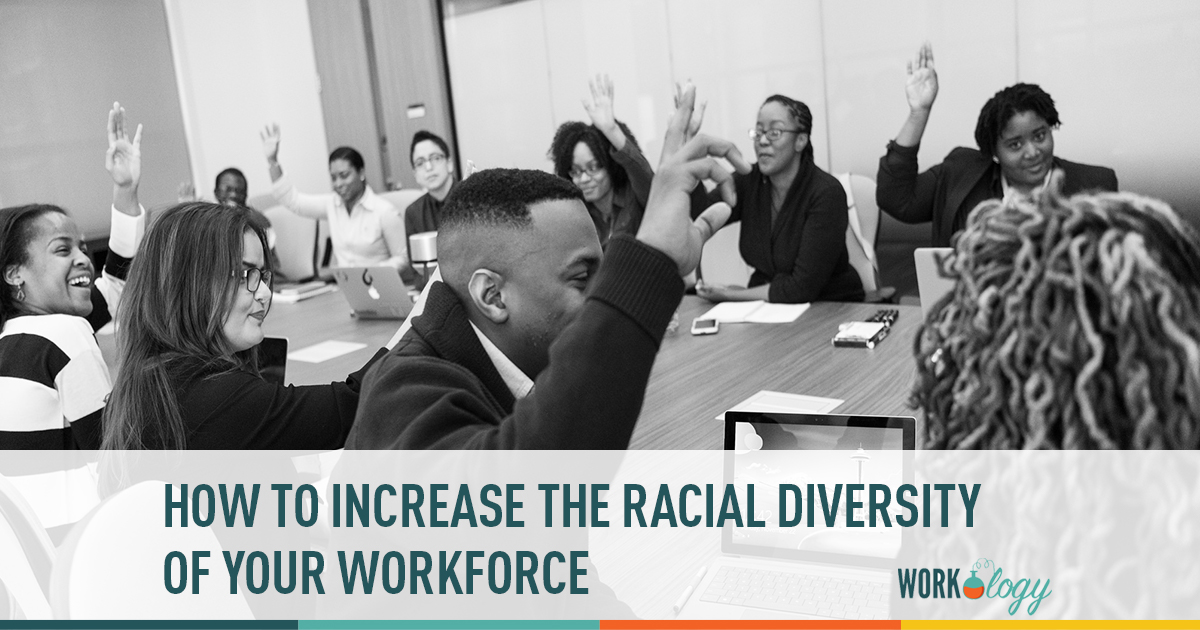 Racial diversity in the workplace – from recruiting to hiring to promoting people of color – continues to move at an unimpressive pace. And if LinkedIn’s annual workplace diversity report is any indication, the needle is moving so slowly that it appears to be broken. Among the company’s 6,435 employees, 5 per cent are Latino, and 3 per cent are Black, representing only a 1 per cent increase over the previous year. LinkedIn’s leadership is 3 per cent Latino and 1 per cent Black.

The company’s diversity report is particularly disturbing because according to LinkedIn’s own stats, it has 433 million registered users, with two new members joining the social networking site every second. It’s safe to assume that LinkedIn has access to more potential employee profiles than any other organization, which begs the question: If it can’t find suitable candidates of color among hundreds of millions of profiles, who can?

Houston, We Have a Problem

A quick scan of other top corporations gives a similarly problematic picture: Google’s workforce is 3 per cent Latino and 2 per cent Black. Intel is doing slightly better: 8.05 per cent of the workforce is Latino, while 3.67 per cent is Black.

So, why do companies have so many problems when it comes to recruiting, supporting and promoting people of color in the workplace in a genuine way?

“Companies often treat recruiting diverse people as compliance or risk mitigation, rather than a business opportunity,” says Art Hopkins, a consultant at executive search and leadership advisory firm Russell Reynolds Associates. Another issue he points out is that these same companies view hiring people who seem different from the majority of their employees as somehow lowering the bar. Having such a limiting mindset negatively impacts their ability to recruit and build a genuinely diverse workforce.

But when companies view the recruitment of people of color as a business opportunity, such inclusivity can result in a more engaged workforce. “An inclusive culture is the bedrock of a hiring process that broadens the definition of best talent,” he explains.

Some companies – especially in the tech industry – claim that their recruiting problem lies on the supply side or pipeline, with not enough Black and Hispanic students graduating with degrees in the necessary fields. However, an analysis by USA Today revealed that these two groups are graduating with degrees in computer science and computer engineering at twice the rate that they’re being hired by the top tech companies.

And Dr. Kenneth Gibbs, a program director for the Division of Training, Workforce Development and Diversity at the National Institute of General Medical Sciences, published a study in 2014 revealing a significant increase in the number of Black, Hispanic and American Indian students obtaining a Ph.D in a scientific field while showing that the diversity gap for university faculty persisted.

With these two microcosms of the larger racial diversity issue in mind, is it possible that organizations are not actively searching for underrepresented candidates?

Viyas Sundaram, chief revenue officer at Snagajob, does not think companies are intentionally trying to avoid hiring people of color. Pointing to the tech community’s lackluster demographics despite many taking an active pro-diversity stance, he suggests the issue lies in social networking, more specifically: employee referrals.

“Happy employees are the best brand ambassadors and make great mini recruiters,” Sundaram explains. In fact, he says that 50 per cent of all Snagajob hires are a result of employee referrals. However, Sundaram warns, “The drawback when you rely on the social network of a non-diverse staff is homogenization.”

Sundaram isn’t the only executive who believes that companies really are trying to diversity their workforce with people of color. According to Leela Srinivasan, CMO of recruiting software company Lever, “Many companies that have made the diversity and inclusion commitment recently are coming at it from the standpoint of wanting to correct past failings, and it shows – in the composition of their current workforce, and in the makeup of their leadership teams and management layers.”

But are some companies only paying lip service? The past is the most accurate predictor of the future. And as a result, while a company may say that it’s committed to diversity, candidates are not necessarily going to take the company at its word when there are no other apparent indicators.

Problem #2: Appealing to Diverse Talent Without a Diverse Staff

According to Harj Taggar, cofounder and CEO of Triplebyte, it’s impossible for an organization to genuinely reach out to any group that it’s not a part of. “Of course, if people of color were already well represented at companies, then this wouldn’t be a topic at all, so companies have to put together their best guess at how to do it.”

Srinivasan explains that minority candidates want to see other people like themselves represented in the company. “They want to have the confidence that they will belong, that they cannot only contribute and have impact, but flourish and build a career,” she says. And when organizations can’t point to past successes or provide examples, there’s a justifiable amount of skepticism among applicants of color.

Research supports that skepticism. A now-infamous study by researchers at Stanford University and the University of Toronto revealed that callback rates were higher for minority college students who whitened their resumethrough simple strategies such as altering their first name and leaving out extracurricular activities, such as undergraduate student groups, that could reveal their race.

Even among companies that used pro-diversity language in their job ads, callback rates were no higher among students who did not whiten their resume.

Srinivasan explains that some companies suffer from the unconscious biases of their employees, which manifest in microagressions against diverse applicants and new hires, which can lead talented people of color to leave the company or never sign on in the first place.

According to a study by RHR International, a global firm of management psychologists and consultants, white leadership has a misled and troubling tendency to view African-American workers as incompetent or overly aggressive, while Hispanic employees are often seen as uneducated and lacking ambition. These perception biases can prevent candidates from being hired or promoted to the ranks of leadership. The same study shows corresponding delays in promotions of African-American employees.

Another hindrance is a lack of networking. Just as employee referrals from a homogeneous staff can skew hiring decisions, the RHR study found that a lack of networking and mentorship relationships for diverse talent within the company could hinder chances at promotions to senior leadership positions. While the respondents in the study indicated that networking was important to them, they were less likely to have such relationships.

Offering voluntary, employee-led groups for non-white or LGBT employees to network is a good first step, but Srinivasan warns against over-relying on them. “While they are an important source of support for workers, confining the conversation to those groups and not opening it up to a broader audience, the majority, reduces the chances of a company making progress in the way it empathizes with and supports diverse talent,” she says.

“I’ve seen this play out at my company Lever, where one of the single biggest proponents of diversity and inclusion is a white male named Tim,” explains Srinivasan. “We’re constantly working toward a balanced workforce and are currently at a 50/50 gender ratio and 40 per cent non-white employees.” She attributes these accomplishments to making diversity and inclusion a company-wide priority instead of limiting it to an employee resource group.

The Role of Organizational Culture

Organizational culture is front and center in efforts to recruit, retain and promote employees of color. According to Sundaram, “A company that values diversity and implements a recruiting and promotional structure that allows it to flourish, indirectly creates mentors that make a company more appealing.” For example, when he joined the C-level staff at Snagajob, Sundaram says that it motivated junior staff members of similar ethnic backgrounds who were encouraged by his promotion. “In addition, prospective employees saw me as ‘one of their own’ succeeding, which has given us an increased ability to recruit a more diverse workforce.”

Organizational culture is so critical to Srinivasan that she thinks it may be the single most important factor to building a diverse workforce and says it’s the job of leadership to create an environment that fosters success among employees from all backgrounds. “One of our shared values at Lever is to champion cross-functional empathy, or XFE as we call it, and that lays an important foundation for everyone – regardless of role, function, gender, race, sexual orientation or anything else – to treat one another with respect and compassion.” Srinivasan doesn’t think that the company would be nearly as diverse without this emphasis on empathy.

The Benefits of Addressing and Improving Diversity Rates

Ideally, companies would pursue diversity because it’s the right thing to do. But there are also commercial benefits to consider. “A diverse workforce that thrives in an inclusive culture leads to a better ability to serve customers, a higher level of innovation and a stronger employer brand, as we found from conversations with Diversity and Inclusion #GameChangers,” Hopkins says.

Taggar agrees and adds that the companies focused on getting the best ideas are most likely to succeed in their diversity efforts. “If that’s the most important aspect of your culture, then it’ll act as your true north and always point you in the direction of finding and promoting the best people regardless of their gender, ethnicity or background,” Taggar explains.

Research supports the advantages of diversity as a way to improve the company’s bottom line. “The commercial benefits are well documented through studies like the one done by McKinsey, which shows that ethnically diverse organizations are 35 percent more likely to outperform their peers,” Srinivasan says.

However, some companies may not understand exactly how diversity can affect their bottom line. Taggar explains that there two specific commercial benefits:

Hopkins advises executives to assess and challenge the company’s culture by asking themselves these three questions:

If the answer to all three questions is “yes,” the next step is to hire and develop inclusive leaders. “Companies must hire leaders who see business sense in diversity, act as authentic role models, have the courage to address employees’ fear around discussing diversity, and finally, create an environment where employees feel like they belong,” Hopkins says.

With approximately 100 employees, Lever is small enough that they’ve been able to manage without a head of Diversity and Inclusion, but Srinivasan says the company will need this individual as it moves to the next stage of growth. “At larger organizations, having someone provide that focus is important, as is making sure that the leadership team is aligned and committed to championing diversity at all levels of the company.”
She also advises companies to analyze their ratios and have discussions with their teams. “Understand where the greatest pain points and obstacles to accomplishing D&I lie, and then build the plan to knock them down, one by one, while leveraging your entire organization on that path.”

This post was originally published on the Economist’s Career Blog here. Its author, Terri Williams, is a freelance writer who covers leadership topics for The Economist Careers Network.