Adam and the Terrible, Horrible, No Good, Communication 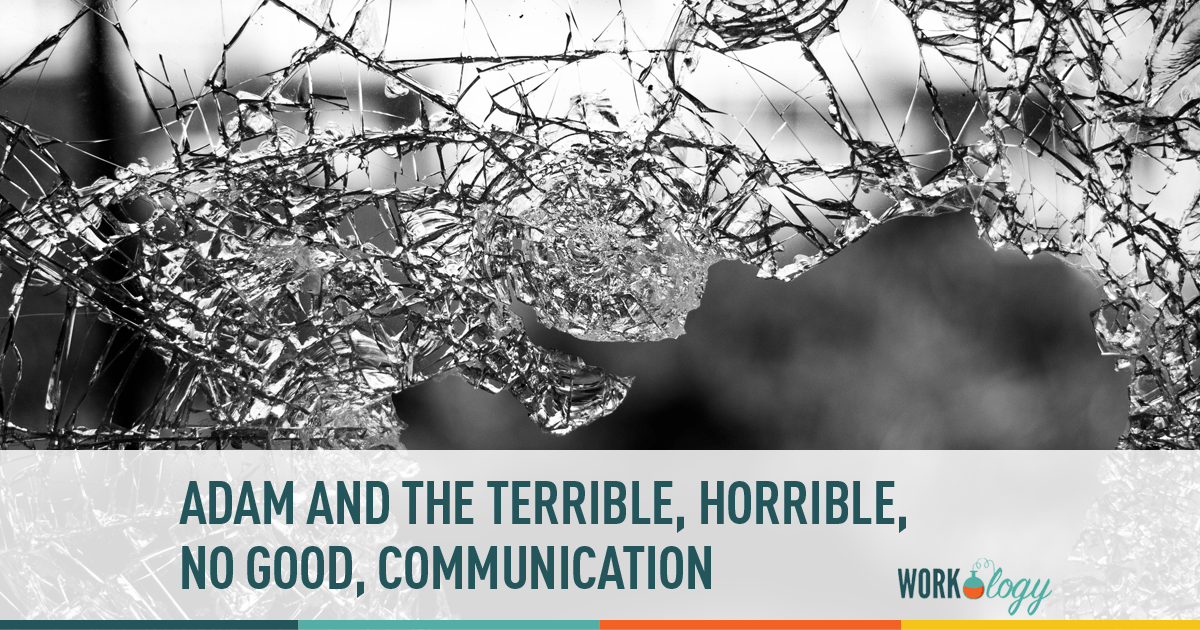 Adam and the Terrible, Horrible, No Good, Communication

I once had an employee (we’ll call him Adam) and Adam was a “slacker”.  He was downright lazy, never completed things on time, always goofing around on the job, and never worked on stuff we wanted him to work on.  Despite this, Adam was brilliant.  In brainstorming sessions, group work, or just in talking to him, you could tell he was smart and knew his stuff.  So why the laziness?  I convinced the manager to not just kick Adam to the curb, but to sit down and have a session with Adam… here’s what we found out.

He didn’t know he was considered lazy.  He had no idea that his goofing was excessive and he even was shocked when we told him things weren’t being done “on time.” Adam suffered from “lack of feedback.”  His boss never set any expectations.  Adam accused the manager of having “high standards” that Adam “never knew.”   As we dug further  we found out that when Adam would “slack off” the manager got more and more frustrated.  Whilst Adam sat in his cubicle assuming the “lack of feedback” was translating to “Hey, Adam, you’re doing a great job.”

During the course of our conversation Adam felt like he was spinning his wheels and felt disconnected from his department and his manager.  Adam continued to say he felt like he didn’t fit in, wasn’t well liked, and assumed that the lack of interaction meant that his manager disliked him.  So why work hard? Of course, for the manager this was shocking. The company had bi-weekly meetings, they e-mailed assignments, no one was mean to him – why would Adam feel this way?

This is a prime example of culture affecting engagement.  This office had a culture of high performers who were self-starters, autonomous, and for the most part didn’t desire feedback. This is the way things had always been and this manager managed towards the masses.  In walks Adam, he’s not the typical employee, he’s from a different culture, and has different needs.

At the meeting we discussed Adam’s concerns, and the managers.  We identified communication methods, ways to make things work for both of them.  Each left with a better understanding of what was going inside each other’s heads and hearts so that neither could be misinterpreted.  And both made it a point to never let things get so disconnected by a “lack of communication.” They promised to have weekly one-on-ones, the manager would set S.M.A.R.T. goals for Adam, and Adam would be more forthcoming about his indiscretions.

Adam went on to work for the company for another 4 years, before landing an amazing opportunity elsewhere.  Before he left he was a top performer and very close friends with the manager, and to this day they still keep in touch.

This is a prime example of communication done right, and changing managerial styles to fit an employee’s needs. If you don’t think it’s important – just ask Adam.

Christine Assaf is an experienced HR Professional with a passion for Social Media. Blogging for over three years Christine started HRTact.com, a professional blog, that talks about all these HR related – both from the manager and employee perspective. You will often find her on twitter exchanging HR wisdom from "behind the scenes." A conference speaking veteran, Christine enjoys helping job seekers with skills assessment, resume review, and mock interviews and coaching executives on best strategies. She is also an active participant in Toastmasters, plays Dungeons & Dragons, loves football and running. Christine’s wit and charm light up the “internet” with the perfect combo of HR knowledge and snark. You can connect with Christine on LinkedIn.