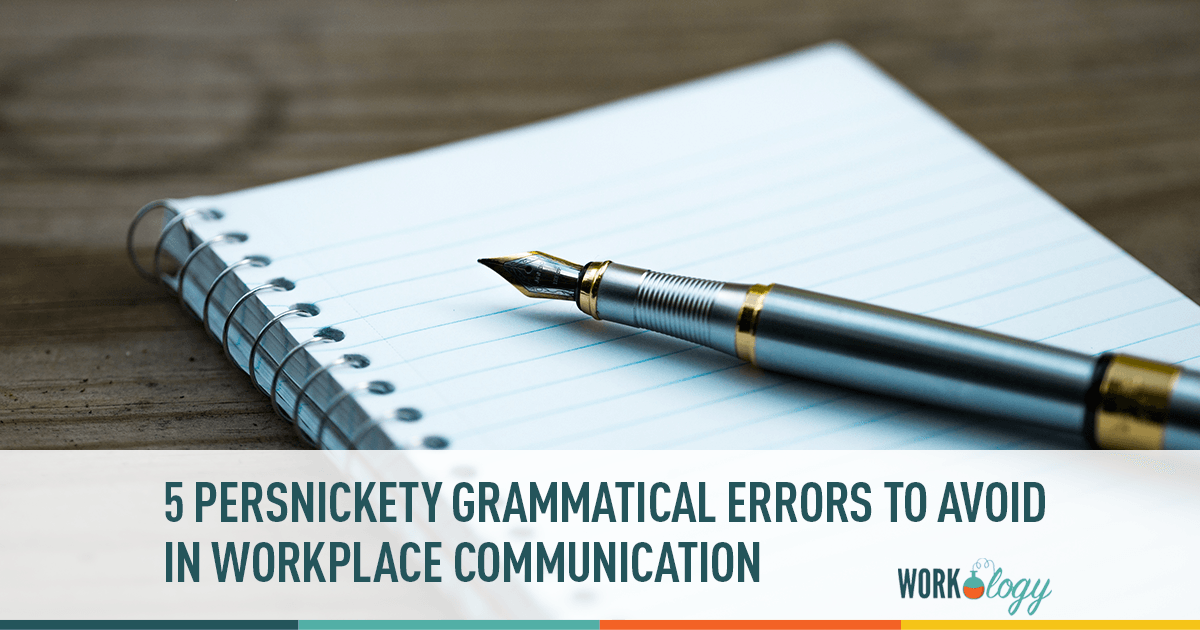 Disclaimer: Dan Lovejoy is the grammar snob about whom your mother warned. Dan holds a Bachelor of Arts in English and a Master’s Degree in Technical Communication, but don’t hold that against him.

In every workplace, there is a disapproving grammar snob or two who will look down his nose at every real or perceived grammatical error in your emails or work documents. While these errors rarely impede communication, they can make a big difference if the snob is your boss, a client, or a hiring manager. It pains me to write such a series, because I know that these errors only matter because people like me say they matter. Worse yet, grammar snobs believe these kinds of errors illuminate some kind of deep character or intellectual flaw. So make sure to avoid them, especially in your job search.

What do we mean when we say “error?” An error is a deviation from Standard American (or British, or International) English. We’ve decided that English professors and news announcers and other influential people know how to write and how to speak, and anything that departs from this standard is an error. The definition of error is all about power and social position, about who has the influence and who doesn’t. So if you want to have influence and power and position, you have to learn to speak and write the language of power. For better or for worse, that language is Standard English.

But there’s another, even better reason to make sure your English is flawless. Have you ever worked your tail off on a document, then sent it around for review, only to get back corrections of misspellings, typos, and apostrophes? One self-appointed grammar snob once wrote me back with a detailed explanation of the reasons we should avoid ending a sentence with a preposition. Did he review the actual content? No, he was too enamored with his own erroneous knowledge of English grammar. Make your English perfect, and reviewers will actually have to comment on the meaning, which is much more difficult than pointing out typos.

I have to confess that this one makes my eye twitch. People misuse the apostrophe because the apostrophe really doesn’t make any sense for possessives, and it never did. It makes even less sense for plurals, but who can blame us for getting confused? Scholars aren’t certain why the apostrophe came to be used for the possessive, but it is likely a contraction of “his” between the name of the person and the object in possession. In other words, “John his hat” became “John’s hat.” People were perfectly happy to write “Johns hat,” but the grammar snobs decided that there was something missing (the “h-i” in “h-i-s”), thus the apostrophe. If you find a grammar snob wants to argue about this, throw around the words “genitive” and “elision” and you’ll probably scare them off. Just remember, never use an apostrophe to pluralize a noun.

After pluralization with the apostrophe, nothing horrifies the grammar snob more than the misuse of the neuter possessive pronoun, “its.” (Throw that one around the office and impress your coworkers)  Now “its” is possessive, but it doesn’t have an apostrophe! Just remember that “his” and “her” don’t have apostrophes, so neither does “its.”

Just remember that comprise never takes “of.” If you want to use this expression, you can say, “The machine is composed of three parts.” and avoid comprise, because it sounds a bit high falutin’.

Yep, “less” refers to mass nouns, which are nouns that you can’t count with “one, two, three.” So you can give someone fewer coins, but you can’t give them “fewer money” or “fewer milk.” If you can count it, you should use use “fewer.” So: one item; two items; three items; all those grocery store signs are wrong!

Heavens to Betsy, this is so formal! Unless you’re writing a letter to the President, just use “about” or “with respect to.”

For some reason, ending a sentence with “me” just sounds too informal – somehow incorrect. I blame your eighth grade English teacher. Never use “myself” like this. “Myself” should only be used to talk about doing something to yourself, “I bought myself a present.” or to emphasize your participation in an activity “I gave the presentation myself.” Just remember that in Standard English, you can never precede “myself” with “and.”

These are just a few of the most common grammatical errors I see in business. There are many more. In future blog entries, I’ll write about style, which is a description of word choice and word order. It makes a big difference in the effectiveness of your writing.

Who caught my error?

And here’s a present just for you grammar snobs. I’ve hidden a grammatical error in the text. Can you find it?