What We Can Learn From Starbucks Closing its US Pay Gaps 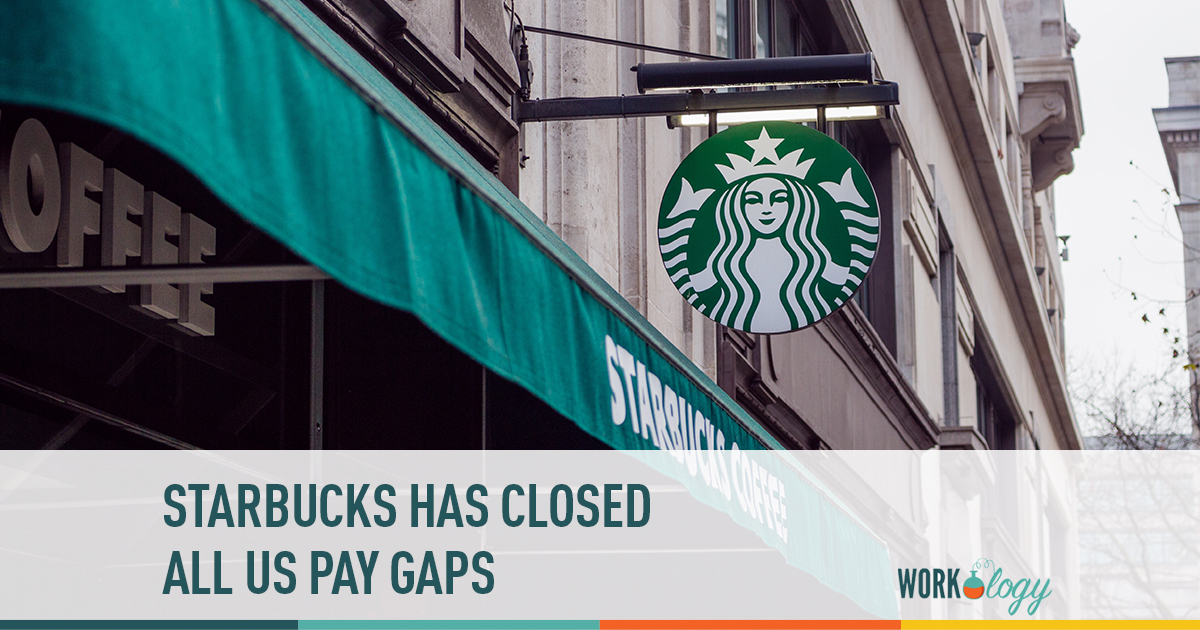 Starbucks Executive Vice President and chief Partner Officer, Lucy Helm, announced last week that the company has closed all race, sex and gender-based wage gaps in its American operations. The news was shared at Starbucks’ annual shareholder meeting and positioned as part of its overall growth strategy: investing in partners, global expansion and social impact.

Closing the pay gap globally is the next step of this strategy. Starbucks Canada, where average wage gaps tend to be a bit worse than in the USA, followed up the announcement by vowing to close pay gaps in Canada with “deliberate speed.” Helm said that “Starbucks has consistently outperformed our industry in terms of pay equity, but it is incumbent upon us to do more.”

A System Built for Change

How they mean to do it is by adopting global pay equity standards, combined with their robust partner recognition and support programs, including scholarships, benefits, vacation, and more. Those standards require regular surveys and check-ins with stores and partners, an experience-based wage calculator, and bias-analysis of all bonuses before they are finalized.

Starbucks has also stopped asking candidates about their salary history. “One of the most important things to get right is starting pay,” said Sara Bowen, head of Starbucks’ Inclusion, Diversity, Equity and Accessibility team.

“If a woman comes into a company low, she tends to stay low. If a job candidate comes to Starbucks making 70 or 80 cents on the dollar, and we use that as the basis for her pay at Starbucks, we simply import gender inequality into our own system. Prior salary can be tainted and should not dictate how we pay our partners.”

What makes Starbucks’ success unusual is that many of the large employers that have closed wage gaps are in the tech or manufacturing sectors – the retail and restaurant businesses often struggled at lower margins, and resist pay equity initiatives because of it. Fight for $15 has been met with claims that any increase to minimum wages would drive small businesses into ruin, and deplete the bottom line of even the largest employers. One of the loudest voices in this fight, consistently, has been Walmart, the world’s largest civilian employer.

Of course, Starbucks isn’t a small business and increases to the minimum wage have little to no impact on the employer, which already pays its partners (as it calls its employees) above the going rate. They’ve already built their strategy and budget around a higher than average pay rate for restaurant workers. But more importantly, I think, Starbucks made partner development a key part of its business strategy decades ago and it hasn’t wavered from that stance, even if employee benefits were dispersed unevenly.

And Starbucks isn’t alone as a retailer taking action on pay equity. Last year Costco announced that it would be giving pay gaps and pay equity more attention. It’s scheduled to release a progress report later this year. While Costco’s salesforce and warehouse staff is relatively balanced in terms of gender, only 3% of its executive leadership is female, and only 31% of its middle management. The company aims to close that gap too, by changing up its hiring practices.

So what really is the difference between Starbucks (or Costco) and Walmart? Why can one low margin, large employer afford to pay above minimum wage and devote time and energy to partner development, while the other has left 15% of its workforce languishing on food stamps? The difference is interest of course, but interest backed up by strategy. Starbucks, Costco, Nike, The Gap and other retail and restaurant sector employers have proven that pay equity and partner development are possible and beneficial even in low margin businesses.