Social Entitlement Is Not a Path to Sustainability 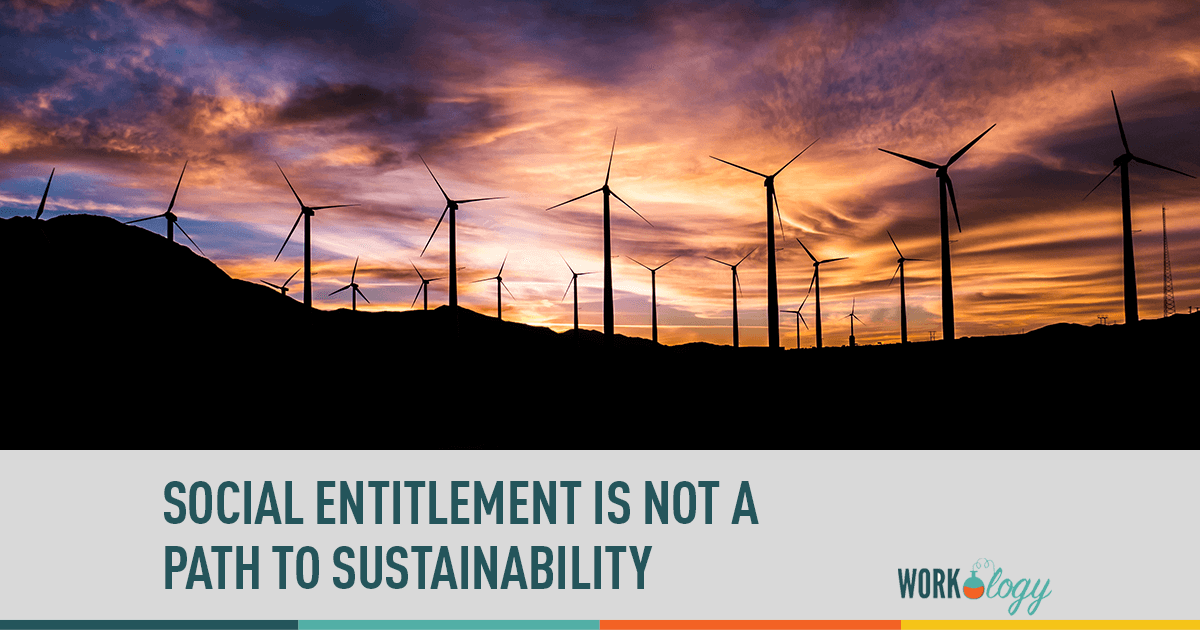 A number of years ago I had the good fortune to be in France for the Tour de France. As a result of a delayed flight we met an American living in Paris who was on our plane. He was very helpful in contacting our hotel and letting them know we were going to be delayed. Additionally, once in Paris, he offered to drive us to the hotel. Talking to him on the ride I discovered he was an engineer for HP. We talked about working in France. He loved it; between HP, the engineers’ union, and the French government he got 12 paid weeks off per year (for those of you not good at math that is 3 months). He also was not allowed to work more than 40 hours a week by government decree. Sounds like a great deal for employees doesn’t it?

I also ran across a similar situation in another European country. In Greece I spent some time talking to bartenders and taxi drivers. One bartender, despite being Greek, had an Australian accent. I asked her about that and she said she had been born in Greece, but early in her life her parents had moved to Australia for work. They had stayed there 30 years and were now reaching retirement age. As a result, they were moving back to Greece to finish off their last two years of working so they could then collect the full retirement benefit from the state. Despite the fact they had contributed very minimal amounts of tax revenue to the state they were going to be able to retire with full benefits from the government. Again sounds like a good deal for the employees.

The problem is that this sort of social entitlement is not sustainable. It does not foster business. France currently has an unemployment rate of 10.4%, their highest in 16 years. Greece is worse; it has an unemployment rate of 25.7%. The citizens of Greece booted out their government last year and the current government is threatening to default on loans from the EU if they cannot get new terms. The social entitlement rules helped dig that hole.

In addition to that problem, those countries, as well as other EU countries and the US, have aging workforces. Everyone needs to address the issues of changing economic realities. Futurist James Canton, in his book Future Smart, says,

The aging US and EU economies face long-term challenges to economic sustainability that require a rethinking of what type of future we want and what cost of that future will be. This is the fundamental existential challenge that all societies will face given slower economic growth and higher demands for social welfare from aging populations.

He goes on further to say,

… it is not sustainable to provide the size and scale of rich entitlements and also hope to stimulate economic growth and productivity. We all would like to have it all, but there is a price. It will buy votes, but it is a Band-Aid at most. Kicking down the road the pain to effectively deal with structural reform, technology investment, higher education, and jobs training until the next generation can deal with the inability to modernize your technology, education, and jobs is a recipe for long-term disaster.

The solutions will have to come from governments, companies, and citizens investing in innovation, improving education, improving job training, and removing barriers to entrepreneurship and businesses that produce jobs. Canton says everyone is going to have to be future smart and adapt to an “innovation economy” that is made up of nanotech, mobile tech, drone tech, renewable tech, cloud tech, robot tech, and is connected and knowledge driven.

If you are not helping drive your company in this direction then you may be doomed; perhaps not to failure, but likely to mediocrity. You also so need to heed in which direction the country is going. There are more and more calls to have a European model of dealing with employees. Just remember that the social welfare model is not working as well as it should in some countries. You have to have the economic power to make it work and that economic power is only going to come from embracing new ways of doing things.