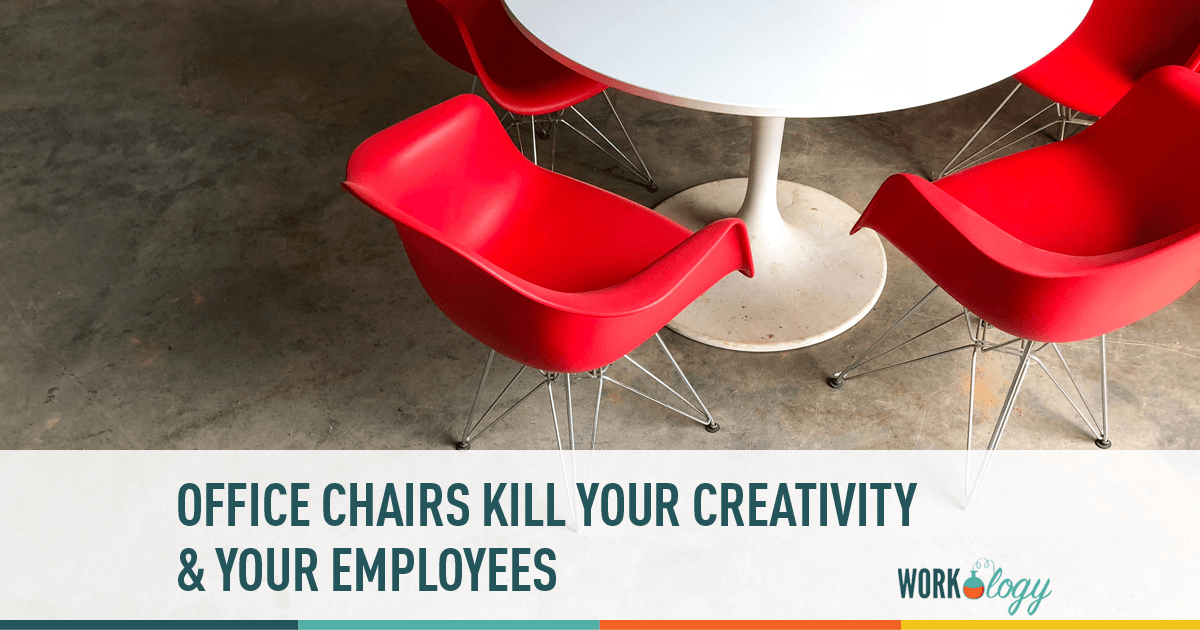 Chairs have been a part of office life for hundreds of years. What has changed though, is the shear number of hours we are spending in them every day. Then we spend more time on the couch when we get home doing further damage. All this sitting increases employee health care costs and at the same time, sitting in chairs has been found to reduce creativity and interactivity in group activities. This one-two punch to a company’s profitability can be countered with some focused redesigning of the office layout and change to the classic desk and chair workstations. Your employees will live longer, happier, healthier lives, and your company will do better

Humans have been sitting around for thousands of years, but it’s only been in the last 50 years, or so, that we’ve taken it to an unhealthy extreme.

With mobile phones, instant messenger, and email, we can carry on conversations with colleagues 25 feet away without ever leaving our chairs. For a body built for standing and moving, this switch to a primarily sedentary lifestyle has had some severely negative health impacts. Physical inactivity has already been linked to obesity, diabetes, and cardiovascular disease. Now, new research shows that it can increase the risk for certain cancers as well even for those who exercise regularly.

When the highest levels of sedentary behavior were compared to the lowest, the researchers found a statistically significantly higher risk for three types of cancer—colon, endometrial, and lung. Moreover, the risk increased with each 2-hour increase in sitting time.

But all is not lost, dear friend! There is no reason to think that simply because we have been using chairs for just about every task in our offices before, we need to continue to use them as such moving forward. We can break the shackles to our rolling desk chairs and bring a new paradigm to what are bodies do when our minds do work.

Research done by Andrew Knight and Markus Baer of the Olin School of Business at Washington University in Saint Louis looked at standing vs. sitting teams for collaborating to produce a university recruitment video “Our study shows that even a small tweak to a physical space can alter how people work with one another.”

Knight and Baer found that the teams who stood had greater physiological arousal and less idea territoriality than those in the seated arrangement. Members of the standing groups reported that their team members were less protective of their ideas; this reduced territoriality led to more information sharing and higher quality videos. “Seeing that the physical space in which a group works can alter how people think about their work and how they relate with one another was very exciting,” Knight says.

And instead of having meetings confined to any one room, consider having walking meetings and if you get outside the building, even better. Walking not only gets the the blood flowing, it gets the creative juices flowing as well. Research out of Stanford University has found that students who were walking came up with a greater amount of alternate uses for a specific item and more novel ideas as well.

Of the students tested for creativity while walking, 100 percent came up with more creative ideas in one experiment, while 95 percent, 88 percent and 81 percent of the walker groups in the other experiments had more creative responses compared with when they were sitting.

While sitting is still a major part of our daily lives, we can break it up into smaller segments, get our employees moving more frequently. Remedies range from the simple and free (calendar alerts to move and stretch, removing the chairs from a meeting space, taking a walking meeting, etc) to the complex and expensive like installing mechanized height-adjustable desks for everyone.  These will not only decrease the costs to the company’s health insurance plan, they will also support your employees to be more creative workers as well. What are some efforts your company has made to get employees to get up out of their chairs and move more frequently?