Low Performer Traits and How to Address Them 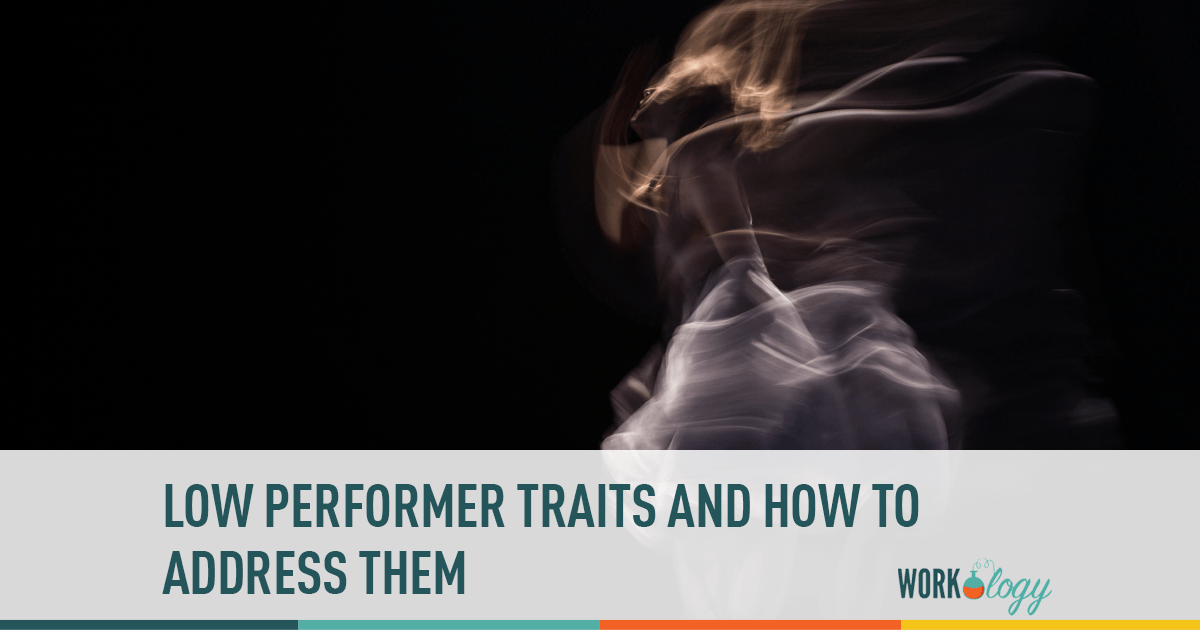 As recruiting and HR leaders, we have a lot of pressure to screen and identify top talent to present to hiring managers. However, there are things we can’t see no matter how much due diligence we use during the screening process. We can screen for skills, culture fit, and many personality traits, but unless we’re capable of predicting the future accurately, identifying candidates that may turn out to be low performers is tricky. Our best adaptation for handling the challenge of low performers is to address the behavior during a probationary period, but oftentimes low performers aren’t low performers in their first 90 days on the job. High performers can become low performers, and it’s important that we educate managers and supervisors on how to address a low performer once they have been identified.

According to data from the Eagle Hill National Attrition Survey, low performers can have significantly negative effects on an organization. The management survey reports that:

It can be nearly impossible to identify low-performing job candidates before offering them a job. The Eagle Hill survey suggests an uphill battle for recruiters and hiring managers, with just 40% of respondents reporting that their company did a good job of recruiting and hiring high performers, only 60% said if they had to do it all over again, they would rehire most or all of their employees, and overall, survey respondents thought they made a “good hire” 25% of the time.

So how do we identify low performing employees? It’s important to understand how these employees impact the rest of your workforce, and the impact of not addressing performance issues. If it appears that your management simply tolerates low performing employees, it can really hurt more than just morale; it hits your bottom line. Companies that don’t deal with “toxic” low-performers risk weakening their culture and driving away their highest performers, leaving you with a workforce that is mediocre at best.

Related: How to Identify and Handle Low Performers

We’ve all worked with people who do the minimum to “get by.” And we know the frustration that comes from trying to coach or mentor team members who exhibit some or all of these behaviors:

“It’s not my job.” You’ll never hear this phrase from top performing employees. A high performer recognizes that they’re part of a team and are willing to adapt to changes in the workplace. Low performers tend to resist change and stick to what they were hired to do – and only what they were hired to do. This can be minimized early with a job description that explicitly states the expectation of development, growth, and additional challenges. However, when a team member thinks a task is beneath them, it’s an uphill battle.

A lack of motivation. Someone with 100 percent motivation and 75 performance ability can achieve above-average performance. But a worker with 75 percent ability won’t be able to achieve the type of performance you expect without motivation. This is a signal that they’re not willing to develop, learn, be better, and contribute more.

They complain constantly. It doesn’t matter why someone is complaining or whom he or she is complaining to (or about), complaints often show that someone is not willing to put in the work to make a change. It’s a time waster, and it’s almost always easier to complain than to be productive.

They make excuses. If things don’t get done because something else takes priority, that’s bound to happen from time to time. However, if things aren’t’ getting done because of an unfair excuse, that’s a problem with the employee. If there seems to be an excuse for everything, you might have a low performer on your hands.

They care a lot about credit. Low performers only worry about being productive if it’s going to get them credit in the long run. In order to be productive we have to be creative and innovative in our role. Simply doing what we’re told and then stopping isn’t using time efficiently. Most of our accomplishments are collaborative efforts, and someone who only does things for personal gain is not looking out for the team or your company.

Other red flags: They gossip. They neglect to bring up important issues in meetings, but will discuss them at length outside of team meetings. They’re negative. They have one foot out the door at the end of the day and are frequently late with excuses (a.k.a. “Clock watchers”). They think they can’t be replaced. They focus on past experience instead of current achievement.

All of these (or just some of them) add up to a low performing employee. Now that we’ve identified them, it’s time to address their performance.

Continuous Performance Management is the Key

Con­tin­u­ous per­for­mance man­age­ment is defined as per­for­mance man­age­ment process­es that take place through­out the year on an ongo­ing basis. It is a con­tin­u­al process, as opposed to those based on tra­di­tion­al annu­al appraisals. Feed­back occurs more often and it feels more nat­ur­al for both man­ag­er and employ­ee, who can devel­op more of a healthy, authen­tic work­place relationship.

In Betterworks’ 2018 State of Performance Management Survey, the company surveyed nearly 800 professionals in enterprises with 500+ employees, from both HR and people management roles, to find out what is (and isn’t) working with their performance management programs. The Survey found that HR professionals and managers agree that annual reviews are not delivering on critical business outcomes. Respondents identified the top problems with them as causing tension and anxiety for employees and managers, being too subjective, lacking quality feedback, and failing to actually improve employee performance.

However, survey respondents who have adopted a continuous performance management process reported significantly lower incidences of key challenges associated with annual reviews, such as:

What to Say to Low Performing Employees

How Technology Can Help Improve Performance

One of the biggest challenges with HR technology is that it is separate from an employee’s daily communication tools like email, project management like Asana, or direct messaging platforms like Slack and Microsoft Teams. A great example of how to integrate performance management, Betterworks integrates the manager-employee feedback loop into the workflow. Performance management technology can seamlessly integrate with the technologies we currently use, making it easy to update goals, share changes, and keep on top of the execution and results of your teams. This is critical to getting the most out of your workforce. For an example of what this looks like, take a look at how Betterworks supports continuous performance management.