How to Identify and Handle Low Performers 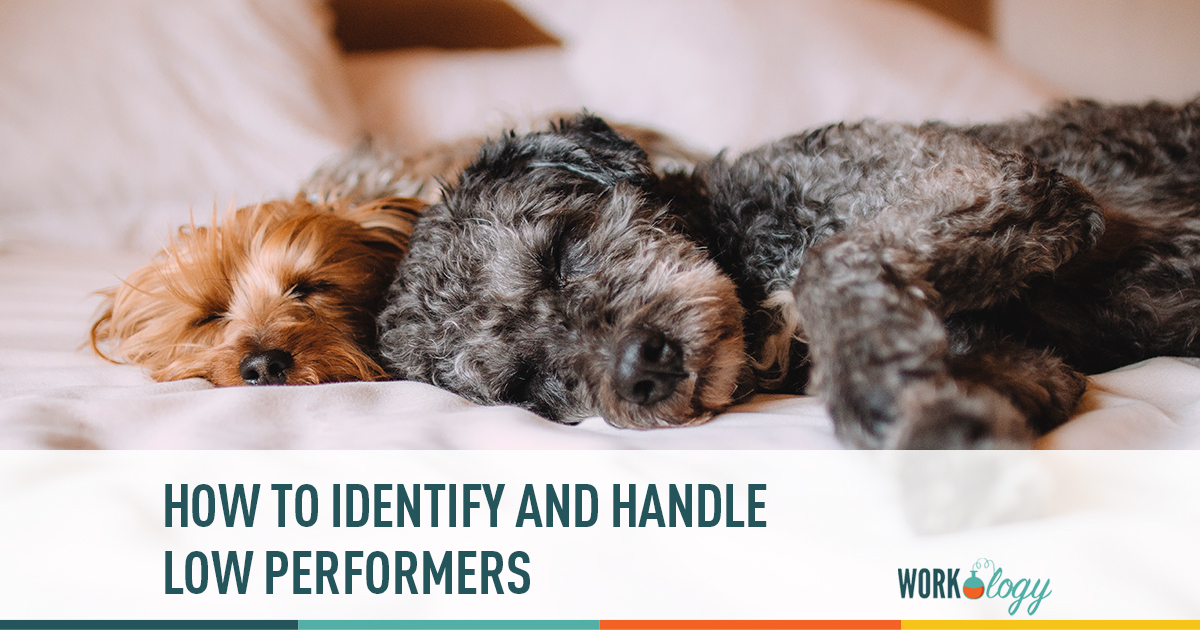 However, according to data from the Eagle Hill National Attrition Survey, low performers can have significantly negative effects on an organization. Below are a few excerpts from the survey respondents:

Low performers in management roles contribute to attrition among high performers. These workers leave for a variety of reasons, including limited career growth and pay. However, according to Eagle Hill’s survey, among companies with high turnover rates, 26% of high performers leave because of poor management.

And it’s costing companies a pretty penny to replace workers. Eagle Hill reports that replacing a mid-level employee – including hiring and training costs, in addition to lost revenue and lost productivity – can add up to 150% of that employee’s salary.

How Low Performers Affect Morale and the Company’s Bottom Line

Low performers undermine the concept of teamwork. According to Autumn Manning, CEO of YouEarnedIt, an employee engagement firm. “So much work today is accomplished through a team, and the really tough problems are the ones that require a creative approach, critical thinking, or a team who has the desire and motivation to work harder and smarter.” However, if one or more members of the team are viewed as free loaders, it can negatively impact the dynamics of the group. “If you’ve got people ‘mailing it in’ due to a lack of energy or alignment to the mission, you’ve got performance risk,” Manning says.

And this counterproductive culture ripples throughout the organization. “Top performers want to work with other top performers,” according to Bill Sanders, managing director of Roebling Strauss, Inc., an operational strategy consultancy in the San Francisco Bay Area. But it’s not just the best workers. “Keeping low performers around directly lowers the moral of everyone else, even average performers,” he warns.

Low-performing workers don’t just affect their peers; they also consume a large chunk of their manager’s time. A Robert Half survey conducted a few years ago revealed that some managers spend 17% of their time – the equivalent of nearly one day a week – managing poor performers.

Some companies may tolerate low performers out of a sense of duty or obligation. But Sanders refutes this line of thinking. “Keeping a low performer around isn’t doing them any favors – something is obviously wrong, and they know it, in fact they usually feel it much more acutely than the employer.”

And Sanders adds another reason to address these workers: “It is a direct waste of investment – you are paying for a level of service you are not receiving.”

When low performers have been identified, how should they been handled? All of our experts agree that immediately firing them may not be the best solution. Manning believes that leaders owe every employee the opportunity to succeed. “Sometimes, morale is lacking because of a lack of direction or alignment, a lack of feedback, or confusion/fear about the work environment,” Manning says. “Sometimes it’s a simple lack of clarity around what success looks like, but regardless, we owe employees a chance to perform and engage by delivering these things regularly.”

However, if all of these steps have been taken and there are still performance issues, Manning says it may be time to ask if the role is right for the person, and if not, allow them to move on with their dignity intact.

The key is to address the issue immediately. Sanders believes that most performance problems are caused by one or more of four broad reasons: (1) situational (2) lack of skill (3) lack of aptitude for a role (4) a poor attitude. “Sometimes you have a formerly high performer who is off their game and when this is the case, I recommend my clients address it head on, find out what’s changed in their life, and then offer reasonable support.”

Sanders recommends training if the employee lacks the necessary skill(s). When aptitude is the problem, he says the role may not be a good fit, but perhaps the employee would do well in another position. “Great sales people rarely make great sales managers for instance; the skillsets required are different.”

If the issue is the employee’s attitude, Sanders says the employee has to address this problem internally. “Point it out, dot your legal I’s and cross your HR T’s and let them go—you’ll be doing everyone involved a favor.”

Feedback is an essential part of engaging employees. Lars Sudmann, former CFO of Procter & Gamble Belgium, TEDx presenter, leadership and board advisor, and executive coach, believes that companies should provide consistent feedback to all of their employees. “This type of feedback is specific, actionable, from an ‘I’ perspective, and with positive suggestions and coaching.” Sudmann believes that by engaging employees early, on an individual level, and with specific steps that demonstrate improvement, many low performance issues can be resolved.

He also extols the virtues of self-leadership. “A key quality and hallmark of high performance cultures is an environment in which everybody is a leader and thoughts, vision, and discussion are promoted.” When leaders routinely ask such questions as, “How do you think this problem should be solved?” Sudmann says they are creating the type of environment that fosters vision and creativity, and drives even low performers to think about ways to solve problems and handle projects.

End-to-end ownership is another way that Sudmann says companies can develop a high-performance culture. “If somebody is responsible for a task—and it should always be one person, not a committee—then this person will need to own the execution.”

So, what does that look like? Sudmann explains, “The person will not stop and say ‘Well, the guys from Marketing didn’t deliver, so whatever’—no, if an individual has a task then he or she will completely own it, fight for resources, and push for the completion, regardless of functional barriers or other matters.”

Using this approach, Sudmann says one of two things will happen. “Usually, people start to step up their game in such an environment or they will decide to leave.”

Sometimes, coaching can help, in fact, sometimes the problem is that managers are not providing coaching or training when they first notice there’s a problem, according to Ram Charan, a business advisor, speaker, and bestselling author whose books have sold more than 4 million copies. However, he says that coaching is only effective when the following conditions have been met:

“If it doesn’t work, you do the person a great favor by having him or her make their career elsewhere, where they can prosper better, instead of remaining in a role that will eventually have a direct impact on other people’s energy,” Charan says. “If too many such people are in critical leadership jobs, it will impact the bottom line.”

Is it possible to identify low-performing job candidates before offering them a job? Perhaps, but the Eagle Hill survey suggests an uphill battle:

However, there are ways to reduce the error rate. Charan believes that a poor match with the job is one of the primary causes of low performance. “We now have algorithms that can cut through the previous history of the person and the interviews to assess the fit between the person and the job, and these algorithms actually have a high percentage of success.”

For companies that don’t use these types of algorithms, Charan says that personnel are the first line of defense. “Reference checking is very important; in addition, your interviewers have to be skilled, and should get feedback about the people they recruit and what percentage of them are not meeting the standards.” Charan says this type of feedback will help the interviewers improve their recruiting skills.

During the actual interview, look for examples of high performance. “Move as quickly as possible beyond ‘talk’ to concrete, measurable results and actions that individuals have taken,” Sudmann says. Instead of asking hypothetical questions, he recommends trying to identify actual cases that describe how a person approaches a problem or handles a task. “The rationale is ‘How you approach anything is how you approach everything,’ Sudmann says. He warns that candidates may be good at discussing theories, but says that details can provide more information. “Cases of true implementation that hold true and have clear identifiable actions can lead to the right direction and can be a great sign of high performance.”