Is the Future of Work Really All that New? 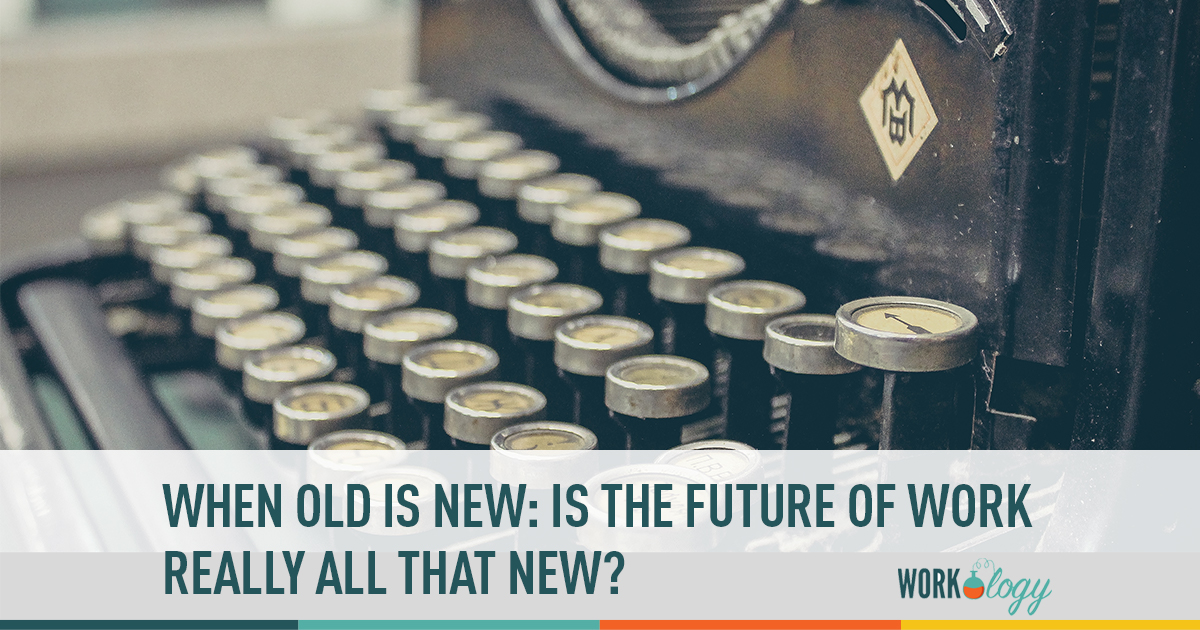 Stephen King once said, in The Colorado Kid, “sooner or later, everything old is new again.” We see clothing styles come back, we see performers enjoy a resurgence of popularity with new generations, and ideas often recycle. The same thing applies to some things in the world of work.

Mark Eltringham, the publisher of Workplace Insight, wrote a post called Working from home and the future of work. How quaint. He said in his article “more and more a growing number of ideas that are presented or perceived as new, are actually old or even outdated.” Take for example the idea of working at home. That is being presented as a modern concept of how to do work, when in reality in the past the vast majority of work was done at home. He goes on to say,

There is also a misplaced linearity in this narrative. Working from home is still something that is sanctioned by the organisation. It is often seen as a treat or a benefit. It may not necessarily reflect command and control management, but it has a common ancestor with it as do many of the variants we ascribe to the concept of agile working and coworking. It is still all about time and space when it should really be about behavior.

I am not arguing that we are not “advancing” in our use of technology. Indeed, technology is having a major impact of how we are implementing “modern” ideas. Look at the pictures in Eltringham’s article. These pictures show conceptualization of “modern ideas in the late 19th century. The ideas pictured are pretty modern and would fit in to today’s world of work, however, the technology would not.

Technology sometimes throws us for a loop. In another interesting piece Eltringham wrote, called What Leonardo da Vinci can teach us about the six hour working day, he tells us that there are now calls for a “bedtime” button on phones, because people are having their sleep disturbed by constantly receiving messages in the middle of the night. He reminds us that there is already an existing technology for that situation, that many seem to have forgotten about. It is called the “off button”.

You May Not Be as Advanced as You Think

Humans have a tendency to think their current idea is the latest and greatest, cutting edge thoughts and technology, and some of it is. But for many of us we need to realize that someone else has probably been there before. Jules Verne thought of rocket ships going to the moon, in the 1800s. Darwin’s theory of evolution, which shattered world views of the origin of creatures, was based on other’s ideas of how creatures got there. Theories of the geological age of earth played a part in the formation of his theory as well.

What will be an innovative is not so much your idea of the workplace, but rather how you apply truly new technology to that workplace.