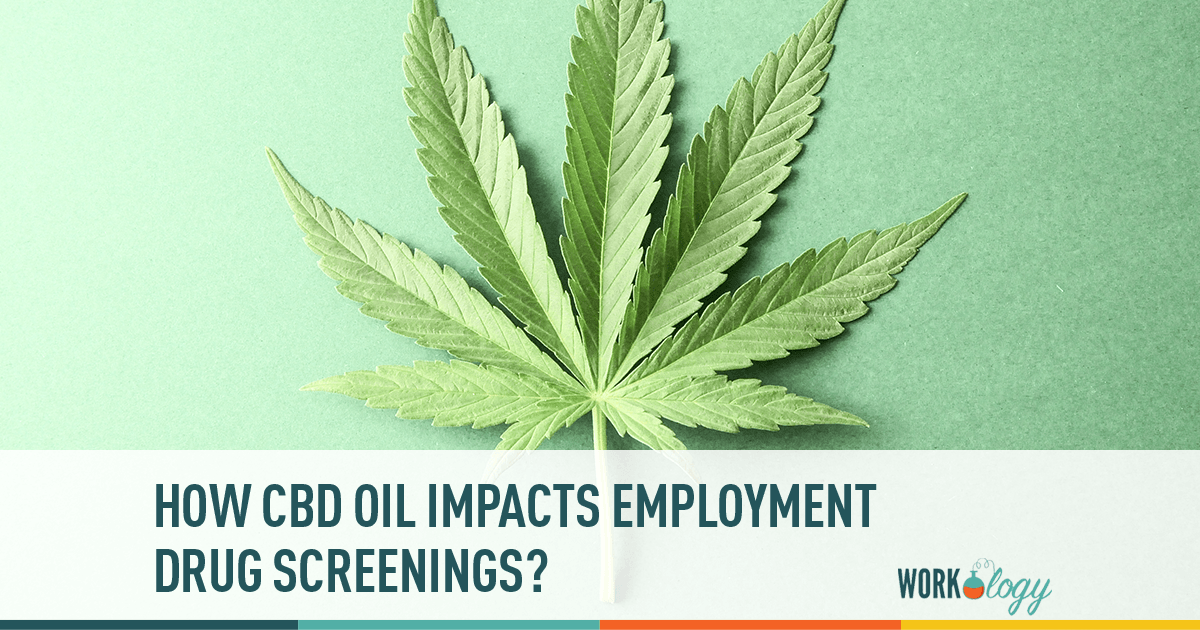 Can a candidate fail a drug screen if they have used CBD oil? The short answer is no, but the long one is more complicated. Cannabidiol (CBD) is a naturally occurring compound found in the resinous flower of cannabis, a plant with a rich history as a medicine going back thousands of years. Today the therapeutic properties of CBD are being tested and confirmed by scientists and doctors around the world.

However, according to ProjectCBD.org, CBD is closely related to another important medicinally active phytocannabinoid: tetrahydrocannabinol (THC), the compound that causes the high that cannabis is famous for. These are the two components of cannabis that have been most studied by scientists.

Can CBD Oil Cause an Employee or Person to Fail a Drug Screen?

A 2018 Forbes article that cites one instance of an Atlanta woman failing a drug test due to the presence of THC when she had only consumed CBD oil indicates that there are still many questions about CBD use and drug screening. In response to massive consumer demand, a huge, unregulated market in CBD oil products reached a critical mass in 2018. The inconsistencies associated with the manufacturing of CBD products makes it impossible for a consumer to know what they are getting their hands on. Since none of the CBD products sold over the counter have been approved by the U.S Food and Drug Administration (FDA), it is relatively easy for pseudo cannabis companies to skimp on testing and other important quality controls.

In some medical marijuana states, CBD products are allowed to have residual levels of THC up to 5%, depending on the state. Because of these low to non-existent levels of THC, more companies have started carrying CBD products, even in states where marijuana is not permitted for either medicinal or recreational use. However, it is worth noting that CBD is not legal at the state level in all 50 states.

It is important to remember that for federally-mandated drug tests, the use of CBD or medical marijuana would not be considered an alternative medical explanation for the positive test result. On a state level, CBD use is decriminalized in states that have legalized the use of medical and/or recreational marijuana (including Colorado, California, Nevada, Montana, and Arizona). There are also some states, such as Utah and Wyoming, that have laws that specifically allow for the use of limited amounts of hemp (as opposed to marijuana) extracts, which includes CBD.

Most recently, the 2018 Farm Bill introduced into the Senate last year could potentially remove all prohibitions from CBD that is derived specifically from hemp, since the bill would “legalize” hemp and its derivatives (as opposed to marijuana, a related but different plant). Some say that this could lead to the full-scale legalization of CBD.

Your company should have a policy about drug use in the workplace, however CBD and the legalization of medical marijuana in many states complicates what you can and cannot legally require of your employees. Banning medical marijuana use could be comparable to attempting to ban the use of legally prescribed pain and other medications. According to the Employer’s Council, generally, employers do not have to accommodate the use of marijuana since the substance is illegal under federal law. However, there are some courts, such as in Massachusetts, that have declared that employers are required to at least consider the accommodation of off-duty use of medical marijuana.

Medical Marijuana and Legalization at Work

With the increased legalization of marijuana, it is possible that more courts will begin interpreting the Americans with Disabilities Act (ADA) and its state-specific equivalent laws to require companies to consider an employee’s use of medical marijuana as a reasonable accommodation. However, bear in mind the requirements that the accommodation not (a) present an undue hardship or (b) present a direct threat to the employee or the other employees in the workplace. CBD oil falls under neither of these requirements.