How to Hire and Recruit Boomerang Employees 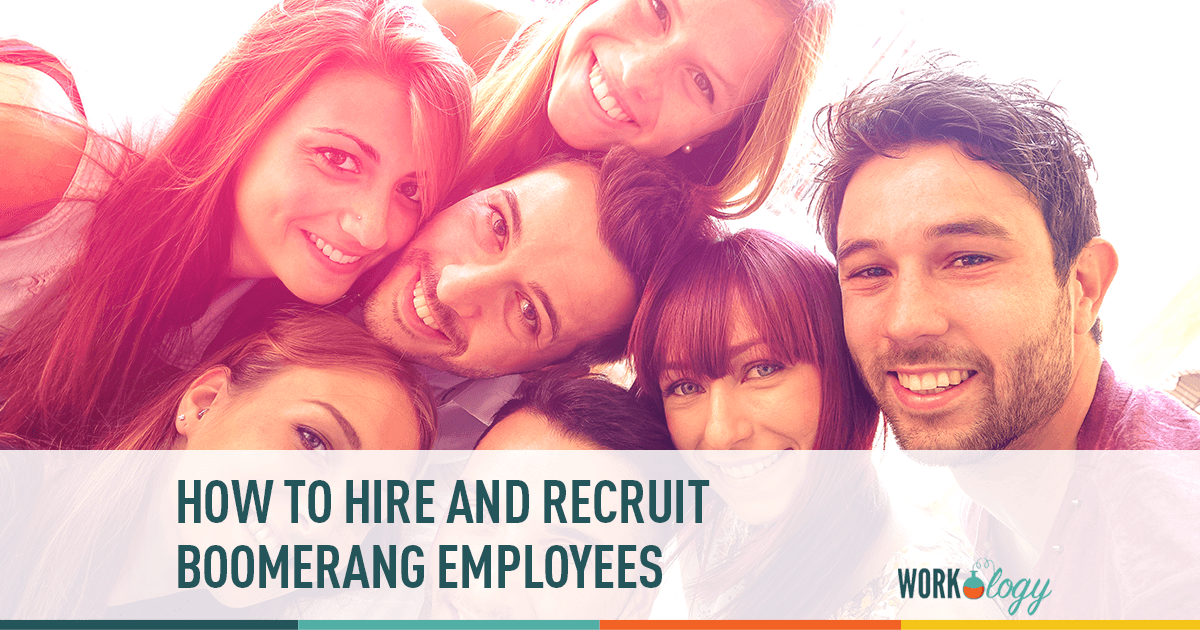 A couple decades ago if an employee voluntarily resigned and left the company they would  seldom be given an opportunity to rejoin the organization. They would be considered disloyal by many members of management. Many job counselors would often recommend against rejoining because of the possibility of being the first to be let go in times of cut backs. But today companies have realized that boomerang employees are a good bet.

One of the things that used to standing in the way of rehiring former  and ex-employees was just keeping in touch with them. Without a concerted effort to track employees contact was often lost. Sometimes they might come back on their own or occasionally they might refer someone to the company. Today however social media is making it much easier to keep in touch with former employees. Many companies have established “alumni” groups on LinkedIn, Facebook and even Twitter. I belong to a couple myself for the social purposes of keeping in touch with former coworkers. But many companies are now starting to use these alumni groups to reconnect with potential future re-employments.

How & Why to Rehire an Employee

Why would companies want to reconnect with workers who have left them in the past? According to Ira S. Wolfe of Success Performance Systems, writing in Boomerang Employees: Hiring Backwards:

Hiring a boomerang employee has one of the highest returns on recruiting investment an employer can ask for. The cost to re-hire a boomerang employee has been reported to be 1/3 to 2/3 the cost of hiring a “virgin” employee. Little time or effort must be invested in getting to know the candidate. Boomerangs can be valuable to an organization because they understand the culture. They have a history with the business, but bring a fresh perspective from the outside. During their absence, there is a good chance that boomerangs have learned new skills and strategies, achieving success in a different setting.

An article in the Wall Street Journal called Boomerang Employees states “Former employees also are cheaper to hire because firms can avoid external recruiters and a prolonged slog through résumés of unqualified applicants. And so-called boomerang employees tend to have better retention rates upon return as they have seen other less-attractive options.”

The firm of Booz Allen Hamilton has had an alumni group for a decade however today it is taking a more proactive approach and contacting alumni through its groups and setting up regional in-person hiring events. According to Wolfe “The decision to re-hire an employee should be based on good job fit – that the employee has the right skills for the right job.”

Wolfe also points out that a successful rehire of a boomerang employee does not end with signing them on. ”Hiring boomerangs can be a bit political. The re-integration of a boomerang is a path fraught with landmines. The players might have changed between the time that the employee left and returned.  Interpersonal relationships might have changed too.  And dynamics might be tense if the boomerang leapfrogged over an incumbent employee, who might have felt he or she deserved a crack at the job.”

Should You Re-Recruit an Ex-Employee or an Alumni Group?

The consensus is that today rehiring good ex-employees is good business. And the best way to reconnect with these people is by setting up alumni groups on social media. Here is a link to Booz Allen Hamilton’s Alumni page. http://www.boozallen.com/alumni is you would like to see an example of what a company has been doing.

Are you using an alumni group or network to re-recruit or engage former employees?  What’s working or is working with that employee once at your organization enough?  Please leave a comment below.

Michael (Mike) D. Haberman, SPHR is a consultant, writer, speaker, teacher and co-founder of Omega HR Solutions, Inc.  He has been in the field of HR for 30 years as both practitioner and consultant. He specializes in compliance issues for his small business clients. He is the author of the blog HR Observations which can be found at www.omegahrsolutions.com and he has been writing blog posts on a full spectrum of HR topics for almost seven years. He is an active user of Twitter and can be found at @mikehaberman or @HRComplianceGuy. He has been an instructor in HR for 14 years and has helped many people achieve their PHR or SPHR during that time.