Guinea Pigs, Google, and You 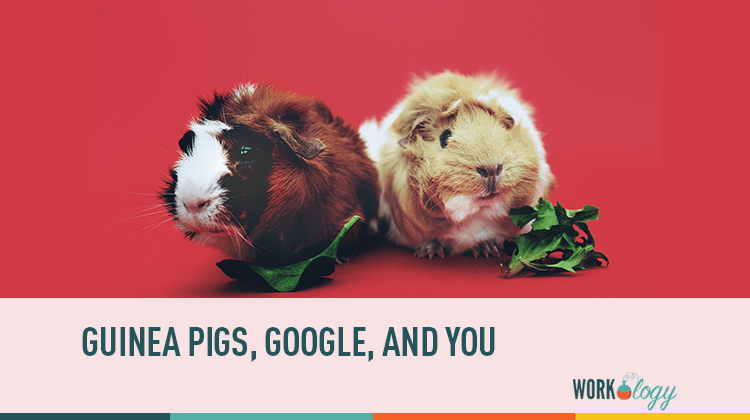 How do you know if that next big idea will or won’t work as a strategy in your company? Is it because you’ve tested and measured to find that result, or is it because you made an assumption ahead of time? Maybe you should give things a test run on a sample population (your guinea pigs) before making the final call for the whole organization. Want a successful example? Try Google.
Develop Rabid Fans

Have you used a Google product or service in the past 24 hours? Chances are you have if you’re using a computer at all. From Gmail to Docs to Voice, Google seems to have an offering for just about everything. How did these things begin? They started with a small group of rabid fans. A select few received invitations from Google, and that exclusive group used word of mouth to reach a large audience.

If you created a new policy, benefit, or pay structure that was amazingly popular with the pilot group, just imagine how it would be when all of the employees start buzzing about your new offering. It’s amazing to think that you could be like Google in that regard, but it’s really a matter of finding who is going to spread your message the farthest and letting them do their thing.€

What would you do if you controlled where one-fifth of your work schedule was dedicated? How would you spend that time? One of the perks of working at Google is 20% time, where employees can dedicate a portion of their time to projects of their own choosing. Interestingly enough, some of the company’s best products/services grew from the 20% time. Using just a small portion of your time and efforts can have a dramatic effect on the bottom line, and it’s not a huge investment for the potential return.

Google would be nothing if it stopped developing new products after their search engine debuted. Its increasing popularity over the years has come from a steady influx of new services that appeal to a broad range of people.

Instead of sitting back and becoming too comfortable after a big success, keep your eyes on the horizon for new and better ways to build your company by working with (and through) its people.

You don’t have to be as large as Google to do what they’ve done. Go ahead. Treat your employees like guinea pigs. Use a little bit of your time to test new ideas. You don’t have to be a global, super-powered corporation to give these things a shot (although it doesn’t hurt). All it takes is the courage and dedication to making your people and organization better!

I’d love to hear your thoughts on how you can test ideas on your own employees. Or maybe you’d like to share how you’d use your 20% time if you had it? Drop a comment below!

This guest post is by Ben Eubanks. Ben hearts his Google stuff (although he loves his new baby girls even more!). He lives and works in Huntsville, AL as an HR pro by day and an HR blogger by night. Want to connect? He’s on Twitter, LinkedIn, and uses that email thing, too