The candidate experience is a hot topic among consultants and pundits. Workology has even had a week long series called The Candidate dedicated to how employers can better engage the candidate throughout the employment process. Many companies are taking strides to do so — and yet many others are not. It’s one of the biggest frustrations of job seekers and yet as recruiters and talent acquisition leaders, we aren’t taking steps to improve not just candidate experience but the application process.

A week or so I stumbled upon an interesting article on Fast Company, writing about the application process from the experience of the candidate. He discussed how he built a bot to apply to thousands of jobs. The idea was creative and his results were fascinating which is why I am honored to have the article’s author, Robert Coombs as today’s guest on the Workology Podcast.

Episode 111: The Real Truth About Online Applications and the Candidate Experience with Robert Coombs (@robert1er)

My guest today, Robert Coombs doesn’t work in HR and he’s not a recruiter. He does have a diverse background having worked in communications in a non-profit. He wears many different hats and enjoys the challenges he faces in working with a small team. Robert was looking to broaden his experiences which led him to think about applying for jobs. He applied to companies like Google, Slack, Facebook and others receiving only automated responses or complete radio silence. This radio silence after he applied for jobs led him to wonder if recruiters and HR were even reading his application and custom cover letter so he created a robot to apply for thousands of jobs.

Using robots to apply to jobs increased recruiter responses to 37%, an increase of 11% vs manual apply #hiring Click To Tweet

His results are part of an interesting project where he built a robot out of curiosity to see if he could impress companies with his project, hopefully resulting in job interviews. What I like about Robert is that he didn’t just measure the responses by companies with the robot. He did extensive AB testing looking at responses when you manually apply for jobs as well as changes he made to the cover letter explicitly stating he was using a robot to apply for that particular job.

What a Robot Taught Us About the Candidate Experience

Robert found in his research that it didn’t matter if he used a bot to apply for thousands of jobs — although personally, I think 11% is significant. He defines his robot loosely as a bot which is more of a glorified spreadsheet with arms. It creates customized cover letters and emails based on the job posting. Robert relied on cover letters because he wanted the job application to be a thoughtful submission.The response rates for him versus the bot were the same, which is why he choose to create custom cover letters when submitting applications. He went so far as to mention in his bot created cover letters that he was using a bot to apply for the job. That didn’t change the response from the companies he applied for. The ATS isn’t designed to keyword search within it.

Robert’s findings (pictured below) found that 74% of his applications where he submitted manually received no response versus 63% using his robot generated application process and custom cover letter. This is in contrast to Talent Board’s 2016 report on the candidate experience which found that 47% of candidates didn’t hear back from employers more than two months after applying for the job. Keep in mind that employers who wish to be included in Talent Board’s report, are more likely to have established candidate engagement processes. 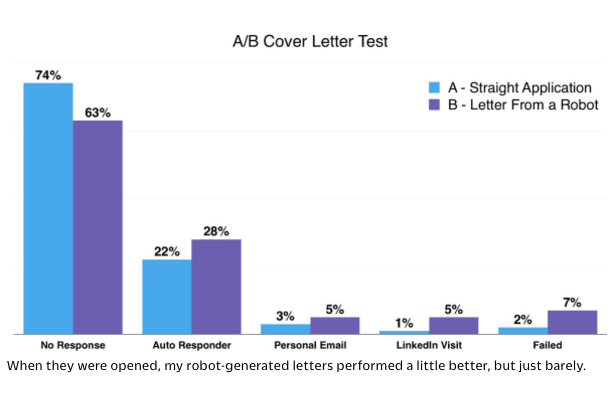 Robert talked about the law of large numbers, pointing out that the more applications submitted should result in more responses. He doesn’t want to make more work for recruiters but acknowledges that a problem exists that we, as businesses, recruiters and job seekers need to address. His advice to recruiters who don’t think a responsiveness problem exists is suggesting that the recruiter actually apply for their own jobs on the website, like a sort of mystery shop, to see what the experience is like for the job candidate.

In 2016, 47% of candidates were still waiting to hear back from employers more than 2 mo after applied #hiring Click To Tweet

I love stories like this where someone outside of the HR and talent acquisition space offers a different point of view. The fact is that candidates need feedback even if it’s to tell them they didn’t get the job or an update to let them know that as a company we’ve put hiring for the position on hold. They need closure. They deserve closure. I hope this podcast interview inspires you to consider making some changes, researching or updating your existing candidate engagement process.

Connect with Robert Coombs on LinkedIn.