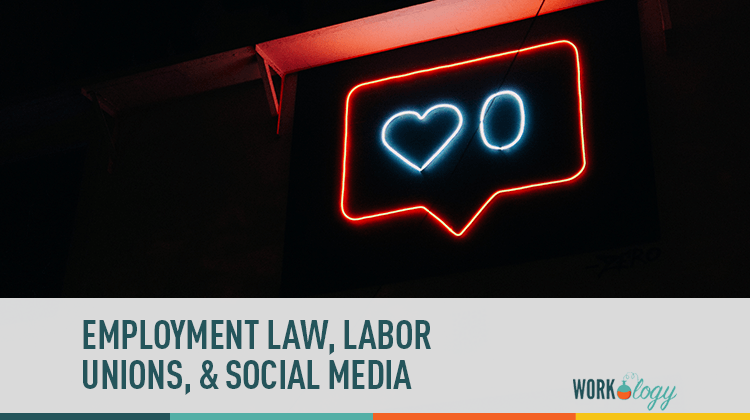 Labor unions are using social media in new ways every day.   They are using it for member outreach, for organizing, and for widely sharing their issues and messages.  They are developing new and effective ways utilizing social media to reach out to your employees with a goal of building contacts for future organizing attempts.

It is very important that human resources professionals are paying attention to this trend, and develop strategies for responding.   Unions are faced with declining membership, and are turning to social media to promote issues, for organizing and for member outreach.   Labor experts such as Phillip Wilson of the Labor Relations Institute predict that overall labor union activity will increase, including strikes, picketing, short term  job actions, potential sabotage, increased organizing and rising corporate campaign activity.

This make it critical that HR Managers understand how social media can be used as part of an effort to help or hurt your brand.  Here are some the methods that labor unions have been using recently.

As reported in the Daily Kos, the IBEW recently used a blog to successfully organize a Budweiser facility in New York.

A unique campaign to boost membership in New York may be a harbinger of future efforts to strengthen workers’ voices on the job, where laptops can be as important as leaflets.

Nonunion workers at Anheuser–Busch InBev Metal Container Corporation in Newburgh, who make cans for Budweiser beer and other brands, were worried about their futures after the company was sold in 2008 to a Belgian group. Employees reached out to Electrical Workers(IBEW) Local 363 last spring for support – but the fear of captive-audience meetings, harassment and other actions by the employer left many at the plant wary of how to press forward without management sidelining their efforts.

So organizers got crafty and set up a special blog strictly for the 164 employees to debate, strategize, air concerns and ultimately come together for victory, all while avoiding many of the union-busting tactics so common in most campaigns.

This blog is widely credited by union organizers as a major development, and has been mentioned on the AFL-CIO blog as the most successful social media tactic by unions to date.

The UFCW union recently used a special issue web site called No Bad Apples to wage a social media campaign as part of a strike action against the Mott’s Apple Sauce brand, which is owned by the Doctor Pepper Snapple group.    DPS decided to seek wage reductions from employees at a plant in upstate New York, and wound up involved in a work stoppage that lasted nearly 3.5 months.   The union launched a campaign aimed gaining public sympathy, and embarrassing Mott’s.   Tactics included hijacking the Mott’s Facebook page, twitter, and virtual actions directed as the CEO , as well as the sharing of “Street actions” through photo sharing sites such as Flickr.  You can see a 5 slide slideshare deck with specific details on the Mott’s campaign here.

This campaign was inexpensive to create, achieved a fairly level of viral spread, and has been credited with helping to bring the strike to an en on favorable terms for the union.   (No wage reduction, three year wage freeze)

The campaign was so successful, despite being enjoined in court following a filing by DPS for trademark infringement, that the campaign was featured as part of a panel on social media at the International Labor Communications Association’s (ILCA’s) annual conference, held in Washington D.C in November 2010.

According to the AFL-CIO blog,  the special panel on “Winning Campaigns with Social Media covered topics ranging from countering attacks on teachers unions, the social media campaign for Mott’s strikers, and other ways social media might provide new, experimental weapons for union campaigns.  The panel also  examined other campaigns that used social media, discussed what worked and shared ideas on effectively use of YouTube, Facebook, Twitter and other tools.

I can’t stress strongly enough that this stuff is developing rapidly, and that HR managers need to pay attention to these types of campaigns, and prepare contingency plans for  dealing with them.   The potential risk of social media being used against your brand is growing, and you need to be ready!

Mike Vandervort is a guest blogger on Blogging4Jobs. Michael is currently employed as a labor relations strategist for a fortune 100 company based in Florida.  He is also the President of HRH Consulting LLC, a consulting practice offering advice and guidance on labor relations and social media.  He speaks frequently on human resources and business related topics, including social media, labor and  employee relations, the culture of organizations, leadership and employment practices.  You can connect with him on his blog, The Human Race Horses or @mikevandervort on Twitter.