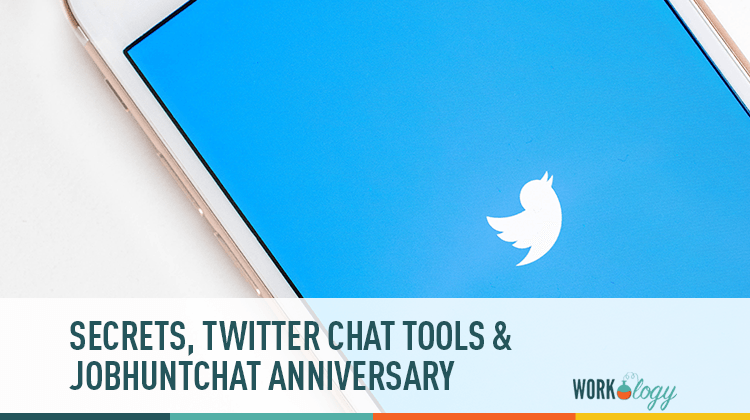 And we’d love for you to join us.

Every Monday at 10 PM Rich DeMatteo and I host a Twitter chat called JobHuntChat.  Over the course of one hour, we tweet 6 questions submitted by job seekers and call on the Twitter community to help answer their questions.  In fact, JobHuntChat is the first job search Twitter chat and our one year anniversary is upon us.

For those of you that aren’t familiar with Twitter Chats, they are an organized networking or club meeting facilitated on the social networking platform, Twitter.  There are literally hundreds of Twitter chats at various times on almost every topic imaginable (To view a full directory, visit the Google Doc). A Twitter chat is a great way to meet other industry influencers, bloggers, or business professionals who enjoy connecting with new and interesting people using social media.  It’s also a great way to exchange information, articles, and learn about new trends.

Because of the fast pace of Twitter chats (#jobhuntchat commonly has 1,500 or more tweets in the course of an hour), I always recommend viewing the chat hash tag stream using an external platform outside of Twitter, Tweetdeck, or Hootsuite that specializes in hash tags.  Some great tools are Tweet Chat and Tweet Grid.  These tools add the hash tag for you when you post and sort the messages so you can focus on the chat including those that you follow and those that do not.

Our anniversary chat offers up a special surprise announcement about the future and expansion of JobHuntChat.  Rich and I have been planning and strategizing about how we can continue to help job seekers and take the concept to the next level beyond Twitter, and on Monday, February 21st, we’ll let you in on our little secret.