Elizabeth Warren Called Out the Gig Economy at the DNC 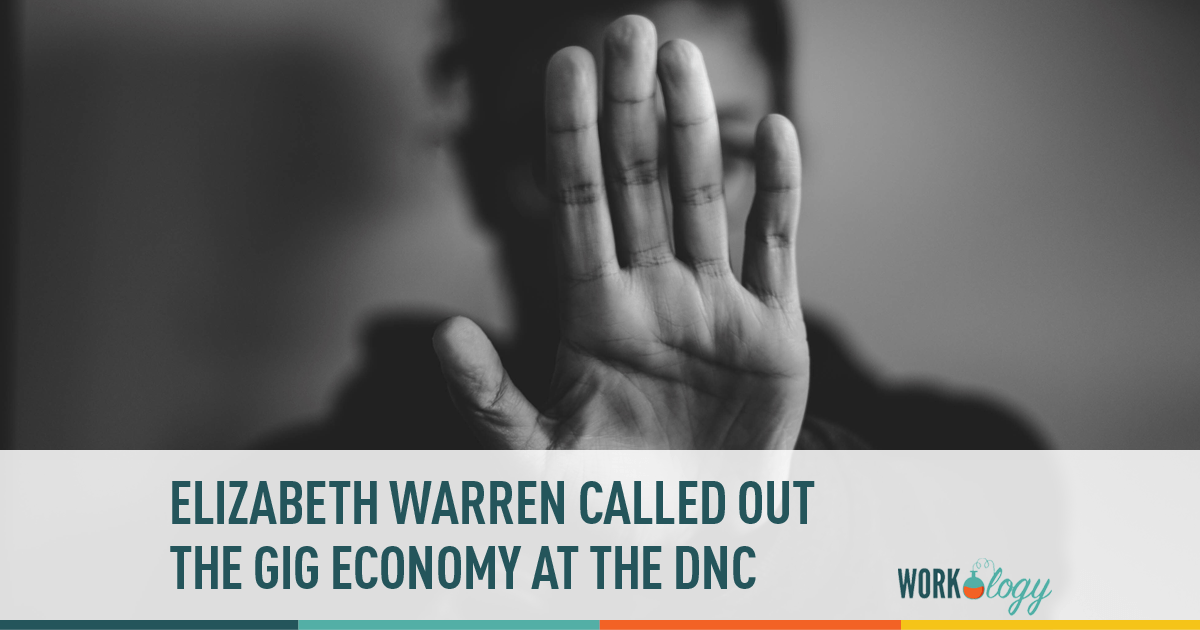 In her keynote address to the DNC Monday night in Philadelphia, Senator Elizabeth Warren took on the American economy and specifically called out the gig economy for creating opportunities for workers, but also making it harder for them to access the disability, unemployment and insurance benefits that come with full time work.

Her speech, which ran 19:40 minutes long, focused on economic inequality, student debt, and how the American economy is being transformed by both global trends and domestic policy. Warren also called out trade deals, including the recently signed Trans Pacific Partnership, for imposing undemocratic restraints on sovereign economies, benefitting big corporations rather than citizens.

The movement of workers from full time middle or working class jobs to casual, part time and freelance work is in the news all the time now, but is an economic trend that has been building steam for decades. One third of Americans now rely on freelance employment for all or some of their income. Warren pointed to how gigging, which can come with tremendous opportunities for career growth and can even be quite lucrative, also comes with certain risks. Full-time freelancers don’t have benefits. They don’t have an in-house support network, including HR generalists to help them navigate difficult workplace issues. And they often don’t have job security, relying instead on their own ingenuity and hustle. While I love freelancing, I also have to acknowledge that it is incredibly difficult. It’s easy to burn out when you’re bust doing your job and always on the job hunt.

The growth of the gig economy, where workers pick up a series of short or long term but sporadic contracts that come with no or few employment benefits, has been accompanied by the growth in entrepreneurship. As of 2015 there were 27 million self-reported entrepreneurs in the USA. Both of these trends, toward self-employment and flexible work, are driven not by personal preference (as the dominant narrative of Millennials goes) but by larger economic factors. Even as we move towards full employment, large sectors of the economy are shrinking, struggling, or even just being fundamentally transformed by technology and globalization. Lots of jobs, including mine aren’t what they used to be. Both gigging and entrepreneurship are natural responses to an economy that is still in recovery and one that is, like the rest of the world, undergoing some fundamental transformations. It cannot be denied that there many workers who are gigging or starting their own businesses would be happier in a comfortable corporate job that pays reliably and requires less personal risk.

Warren argues that the best response to the employment and benefit insecurity endemic in the gig economy is an expansion of social welfare programs and a hard look at domestic economic and international trade policies. I think both of these approaches are valuable, and I appreciate that Warren doesn’t suggest that the solution is just to “get back middle class jobs.” Economic trends don’t respond as much to presidential decrees as we might like.

This was the first speech at the DNC that really focused on economics and it was great to see real contemporary economic trends addressed. Both Donald Trump and Hilary Clinton’s campaigns rely on a message of economic and social disenfranchisement, so we should expect to see more from both of them — and their campaign surrogates like Senator Warren and Governor Chris Christie — on gigging, the decline of traditionally middle-class industries, and job migration.

Personally, I’ll be watching for my favourite buzz term, the fourth industrial revolution. The first to talk about the coming robot apocalypse gets a cookie.