Bright Ideas: Thought Leadership Is About More Than Packaging (I Hope) 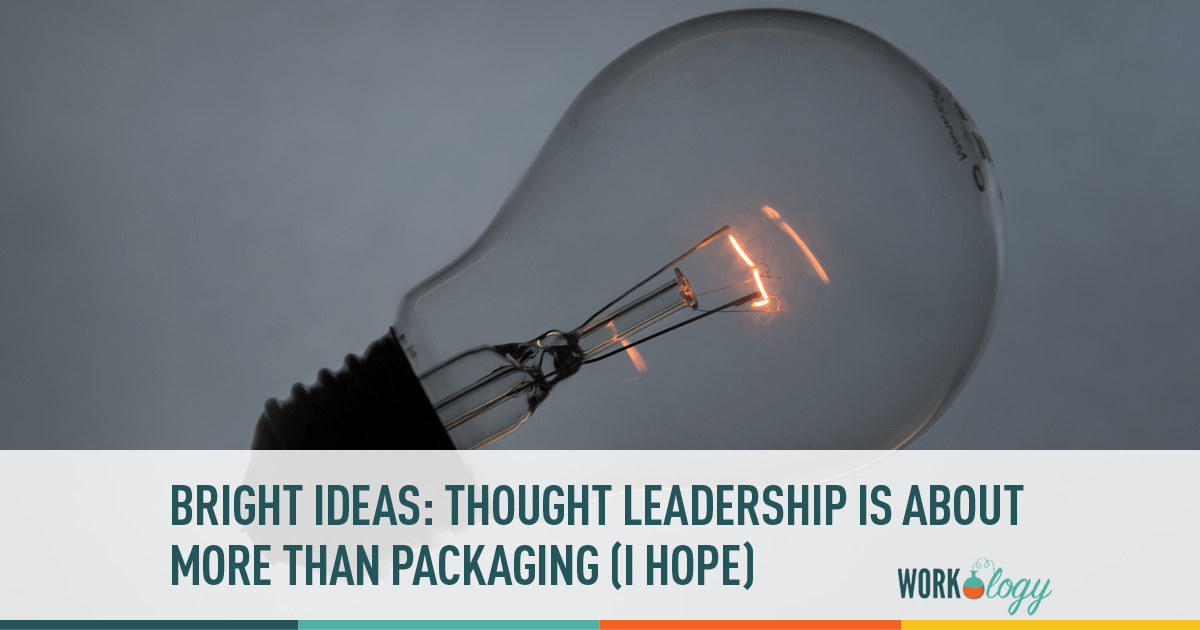 The CBC’s radio sketch show, This Is That has an annual live show where they perform their dry parody live. This year they decided to tackle, among other things, the thought leaders of TED. The self-proclaimed Thought Leader of the above video telegraphs his every gesture, slide and breath — it’s all calculated and it’s all to type. “Walking on to stage, walking on to stage,” he says under his breath as he finds the perfect place to start his oration. “Picture of the world, pie chart, statistic,” he says, once he really gets going, convincing you that he’s got an idea worth spreading.

It’s every TED Talk ever and it’s hilarious.

I’ve loved many a TED Talk but there’s no denying that they became formulaic years ago, partly because of the professionalization of giving TED Talks, the whole apparatus that’s grown up around TED, and partly because TED and the community built up around it got, well, high on their own supply.

The nonpartisan nonprofit was founded in 1984, intending to bring together thinkers from technology, entertainment and design. A kind of loose professional development, networking and presentation-based salon. Since then it’s grown into a global phenomenon, hundreds of undeniably viral, influential videos and regional conferences that introduce us to more ideas and more thinkers. TED has had an impact on all sorts of interdisciplinary conversations — from climate change, to AI, to productivity, to personal growth — and an even bigger impact on how we talk, how we conceive of and perceive leaders.

“You know that I’m a thought leader because I’m wearing a blazer, I have glasses and I’ve just done this.” He folds his hands together in front of him, indicating deep thoughts, so many that they’re ready to burst out of him. It’s a mild-mannered posture, not of political or executive leadership, but of quiet, intellectual superiority. “Humble nod, humble nod,” he says as he wraps up his speech to an “improbably long standing ovation.” He is the platonic ideal of a TED speaker, sure of his place in the world — that stage — the importance of his speech and the role that TED plays in any number of global conversations.

It’s not that TED Talks don’t have their detractors. Of course they do. They’re long past the early days of their campaign for global dominance of professional opinion-having and dissemination.

But TED Talks’ descent into cliche is a lesson in how professionalization, the boiling down of something into best practices, tics and tactics, can strip the life from once vital and exciting methods of exchanging ideas. Of course we want to hear the best ideas delivered in the best presentations. Of course thinkers and advocates should learn how to write well, and sway a crowd and even dress for success. But that professionalization of thought leadership, that polishing up, shouldn’t come at the expense of the thoughts themselves. It shouldn’t be so thorough as to become mere packaging.

A whole industry has sprung up to help create new thought leaders. All too rarely is the first piece of advice: have really good ideas and pay lots of attention to other people’s good ideas. The leader part of thought leadership is influence, and to be sure, persuasion is a big part of effectively influencing your network and community. But the bigger part of thought leadership, of pushing a conversation forward, is listening, questioning, thinking, experimenting and understanding. Or, as Jessica put it, early last year, “thought leaders talk and think a lot. They throw stuff, meaning ideas, out there, chew on it and see if the idea, platform or process to drive change, process or innovation has legs.”

Don’t become Every Thought Leader at TED. How you deliver your ideas matters. But the ideas themselves have to come first.