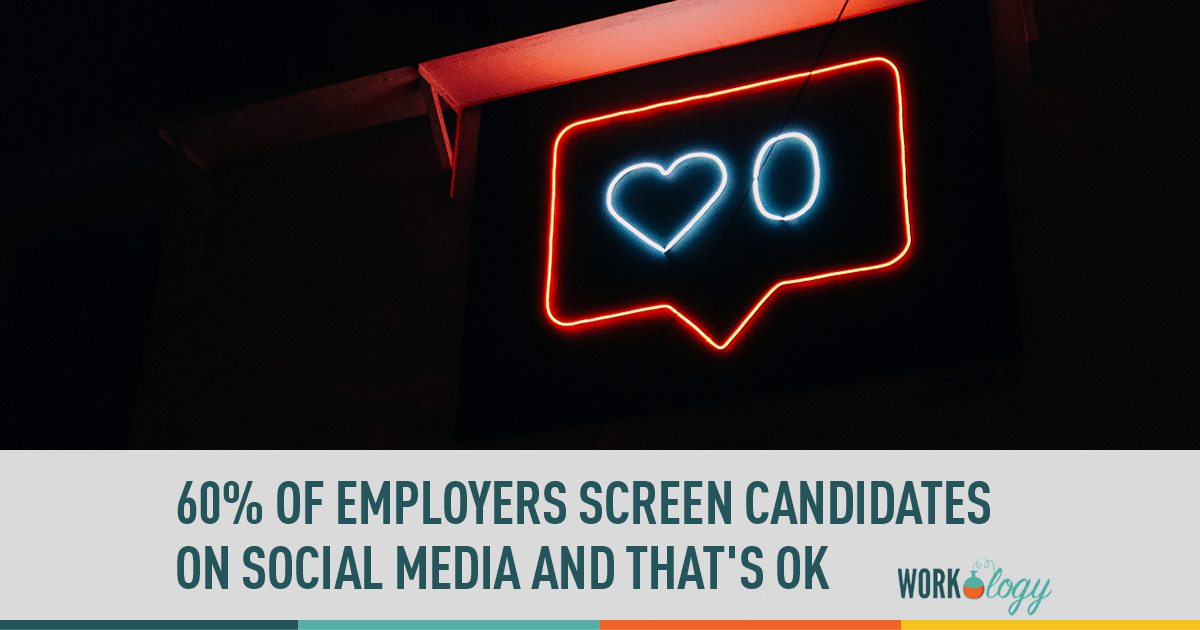 According to a recent CareerBuilder survey, 60% of employers are now screening candidates on social media. Look to see that number increase in the coming years and for it to become standard operating procedure of all recruiters and hiring managers.

Now, how does that break down industry by industry? Which hiring managers and recruiters have made social media screenings a regular part of their hiring process?

It’s obvious why the numbers are so high in tech, sales and financial services, especially for more visible occupations that require a social media presence. The consequences of an embarrassing social media gaffe are high for someone with a big following, or for someone who should by rights be expected to know better. Less so for average workers who may have a much bigger divide between their working and personal lives. But as more and more people are fired or penalized for their behaviour on social media, it’s clear that everyone needs to be careful about what they share on social media, as employers in all sectors are taking social media more seriously. And as a former retail recruiter and hiring manager, I can tell you that social media screenings are increasingly a part of basic due diligence, especially when it comes to hiring young workers.

But Is Screening Candidates On Social Media… Creepy?

While I do think that recruiters and hiring managers should be careful not to cross boundaries in their recruitment and screening process — for example, I think that recruiting on dating sites is just plain weird — I don’t see anything wrong with basic research on candidates. In fact, I encourage it. You can learn a lot about someone’s social media presence, regardless of whether or not it includes embarrassing photos, illegal activities or generally anti-social behaviour. You can learn about a candidate’s interests, beliefs and their self-image. Even the most haphazardly curated and TMI social media presence is still curated: what we share isn’t just who we are and what we like, but how we want to be seen by friends and strangers alike.

Embarrassing stories! I have a lot of them. And while I do share them on social media from time to time, I do so strategically. There, my secret is out: I generally share the best stories, the most endearing stories and the ones that I learned something from. I don’t share my drinking stories, my sex stories or my most personal sob stories. I’ve never been much of a rebel but if I did have a well of crime-based stories I wouldn’t share those on social media (or really, in public) either.

But these are the basics. Of course we all know, even younger people, that sharing these things on social media will have consequences. Of course we all know that all sorts of people might happen upon our social media accounts, including employers, law enforcement and even cyber bullies looking for their latest target. When we do overshare it’s because we felt safe to do so, either because we don’t think anyone will see the posts in question or because we’re genuinely convinced that social media is a bubble of free, private space: what happens on social media stays on social media, amirite? When people violate that sense of safety it feels wrong. It feels creepy. But that sense of safety was always an illusion: social is the enemy of private.

What Employers Are Actually Looking For

The same readers who immediately thought “JFC that’s creepy” probably also leapt to the conclusion that employers are only looking for excuses to tank your application. Alas, my cynical friends, that is not the case.

Ok, so some of us are looking for dirt. But if there’s obvious dirt to be found, I can’t do much for you. Don’t have an embarrassing social media presence, unless you’re in an industry where oversharing your shenanigans might be to your advantage — for example, comedy.

But it’s important to recognize that the top three reasons recruiters and hiring managers are checking out your social media accounts are legitimate, sensible and perfectly un-creepy. Background and reference checks are a basic part of every hiring process. It’s increasingly common for organizations to test for cultural fit with multi-day interviews, effectively trial periods, where candidates come into the office and work with the team. We want to know if you’ll be a good fit for the job and the organization, not just for our own sake, for the candidates.

One of my most miserable work experiences was at a job that was a little bit much for my qualifications at the time. I bluffed my way through the interview process with a combination of study and confidence, but I struggled to absorb the training and ramping up afterwards was an even bigger hurdle. Eventually I caught up and performed to my employers and to my own expectations but if we’d known a little bit more about each other, that hiring manager and me, we would have known from the start that it was a bad fit.

Let the Right One In

The majority of recruiters and hiring managers checking up on your social media accounts just want to get to know you better, to understand how you think and work and play, and to get a sense of whether or not you’re the right fit for the existing team. That’s a good thing. And if you want the job you should be open to communicating with recruiters and hiring managers outside of the formal interview process. In fact, if you’re reluctant to allow them access to your accounts or simply don’t maintain any, you may find yourself penalized.

This is, I think, where creepy can come into play. While it’s true that not being able to find out anything about a candidate is a red flag — it’s 2016, friends, get your butt on Facebook, no matter how much you hate it — recruiters certainly shouldn’t penalize candidates for wanting to maintain boundaries. I don’t think that denying a request for access is necessarily a red flag, but if you’ve got your entire social media presence, from Facebook to Instagram, on lockdown, you haven’t just kept out the creepers, you’ve kept out the recruiters and hiring managers who really just wanted to learn more about you. If this is THE job, the one you’ve been dreaming about or at least an important stepping stone, you might want to consider letting the right one in.

Ultimately it’s all about balance. Understand that it’s common now for recruiters and hiring managers to dig a little deeper when screening candidates and cultivate a social media presence that’s welcoming to them – particularly to those in your industry. Protect your privacy by being careful about what you share and perhaps maintaining some accounts for personal use — Facebook is perfect for this, despite it’s security weaknesses, because everyone is on it, including your third grade bestie — and others for more public use. Engage with people in your industry and try to cultivate a social media presence that’s professional but true to you.

Remember, recruiters and hiring mangers aren’t out to get you, they just want to know if you’re the right one to let in.