5 Things to Do In Chicago During #SHRM18 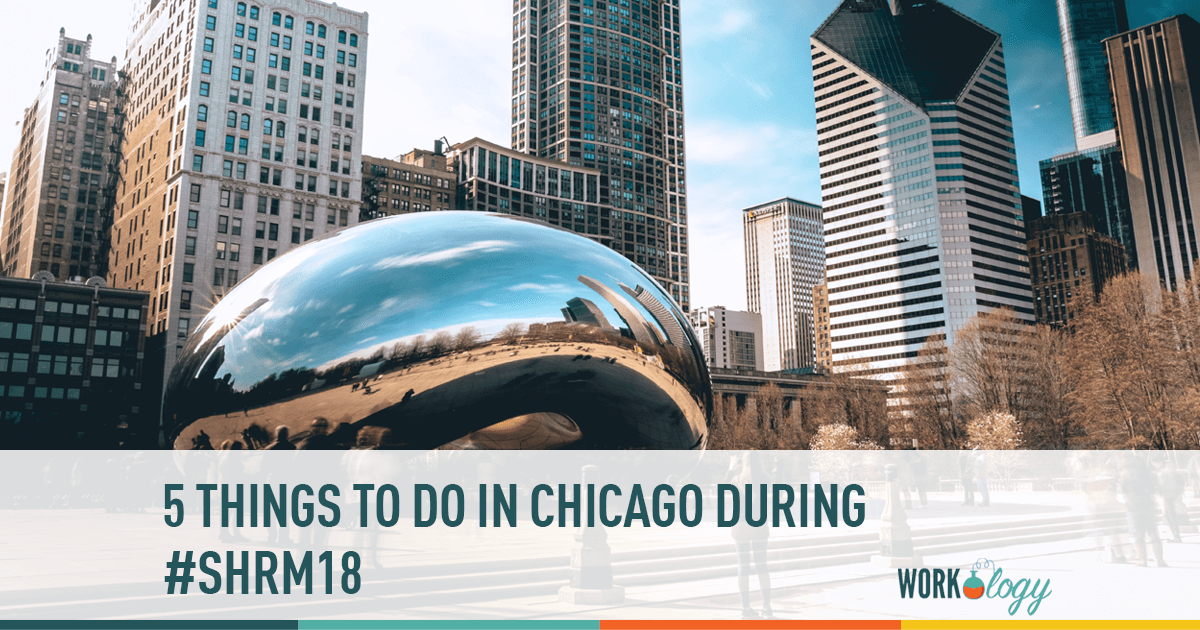 When you’re traveling for work it can be difficult to make time for being a tourist. But since there’s nothing more depressing than telling someone you’ve been to a city dozens of times and still don’t know a thing about it, I’m telling you that it’s time to start making time. This year, the SHRM Annual Conference will take place in Chicago and if you’ve never had the chance to visit this beautiful city before, you should seize this one.

Besides, giving your brain a break from everything you’re learning at the conference will actually help that information stick.

5 Things to Do In Chicago During #SHRM18

So here are five things to do in Chicago during SHRM that can be scheduled in and around your conference commitments.

I think it’s a safe bet to say that if you live in the mid-west you know about Navy Pier. This six-block stretch on the Chicago waterfront features markets, live shows and music, art installations, water features and even a Ferris wheel. The pier is run by a non-profit that aims to offer a sustainable, accessible, and “uniquely Chicago” free experience. Check out its site for free shows and public art installations on during your stay.

The Green Mill jazz club has been in operation consistently since Prohibition. When it first opened it made a name for itself by hosting mobsters, smugglers, and other ne’er do wells but these days its known for being one of the city’s best venues for live jazz, and its most venerable. The club features live music nightly until 1PM, 3PM on weekends, which makes it the perfect after-party for those long SHRM days.

You’re short on time but you still want to take in some local culture? Sounds like the Neo-Futuraniam is a perfect fit. See 30 plays in 60 minutes as this local theatre company delivers dozens of mini-plays to you at breakneck speed. The content is everything from short comedies and romances, to dramatic monologues, to the weirdest of weird performance pieces. You’ll leave this theatre not quite sure what hit you but with plenty to talk about at your next SHRM party!

Ok, this one might take a bit more time out of your day than my other recommendations but if you find yourself with an afternoon light on conference sessions, consider heading over to Garfield Park. The 14-acre Conservatory has been in operation since 1908 and is home to over 5000 varieties of plants from all over the world. Its huge fernery tries to recreate a bit of the prehistoric, trying to imagine what environment the dinosaurs might have lived in.

You can’t go to Chicago and not take in any of its gorgeous architecture. But fitting in a self-guided walking tour or even an afternoon bus tour isn’t exactly easy when you’re traveling on business. An evening boat tour gives you a chance to see the city at its best while also getting a night off from networking. While Chicago has some great examples of neo-classical architecture, it’s better known for its variety of building styles and it’s innovative and unusual buildings that represent every era of American architecture since it’s rebirth, after the 1871 fire wiped out much of the downtown. If you do only one thing during your stay in the city, do a river tour.

There’s so much to do in Chicago. What are you looking forward to most when visiting Chicago for the SHRM 2018 Annual Conference? Leave a comment below.