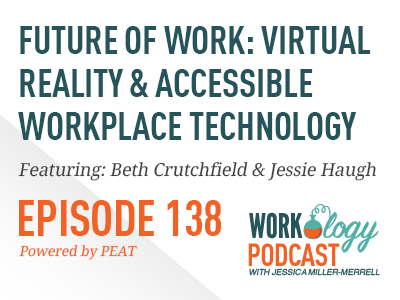 The area of virtual reality and augmented reality is a growing space. The VR industry has increased to 90 million active users in 2017, and it is projected to increase to 171 million users in 2018.  I’ve had a number of podcast interviews over the last three years that touch on the topics of AR and VR, which are just starting to emerge as powerful technologies and tools for the workplace.

As part of our Future of Work series in partnership with PEAT, we asked: How do we make these emerging technologies more accessible for all employees and job candidates?

On this episode of the Workology Podcast, I’m joined by Beth Crutchfield and Jessie Haugh. Beth Crutchfield is the Vice President of Strategic Consulting and Training services with Level Access. Jessie Haugh is an Accessibility Specialist also with Level Access. Level Access is in the accessibility business and has existed and longer than any of its competitors. They have supported the accessibility initiatives of more than 1,000 organizations from leading government agencies, to enterprise-class firms, to smaller sized companies.

What is Virtual Reality and Augmented Reality?

Jessie shares that virtual reality, often referred to as VR, is a computer-generated simulation of a three-dimensional image or environment that a user can interact with in a seemingly real or physical way by using a special electronic equipment. You often see people who are using VR wearing a helmet with a screen that covers their eyes, and gloves with sensors. It’s really a way where the person who is using it is completely cut off from his or her own reality or is placed in a whole new virtual reality.

On the other side, you have augmented reality, or AR for short. AR superimposes, say, a computer-generated image on the user’s real world. It provides a kind of composite view. For this, the end user is still in their actual true reality. But there is a computer-generated image in their reality and that’s through a screen. A good example for this is Pokemon Go. An example of virtual reality which maybe not as many people have heard of would be Batman: Arkham VR, which you can go on YouTube to see.

In an earlier podcast episode, I talked with Nick Boyd from Gap about how they are using VR in their hiring and recruiting process. The use case and adoption for VR and AR in the workplace in the area of recruiting, not to mention collaboration and training, will continue to grow. Beth, Jessie, and Level Access are working to make this new technology accessible and inclusive for everyone.

Right now, Level Access is involved in some trials on different ways to make VR applications accessible through the best practices that we already use for game development. The team extrapolates from those best practices when needed within the VR area. It’s trial and error; seeing what works versus what doesn’t work and for which individuals these different avenues do and don’t work.

Accessibility for the virtual reality and augmented reality environments is an exciting and emerging field. Both Jessie and Beth share that VR accessibility can mean many different things. Most importantly, it allows users to have options that they can turn on and off. Visually, this could include the ability to customize and select text and color sizes within the VR environment. Auditory placement of event stimulus is another way for people with low-vision to have a better sense of what they’re perceiving within the VR world, such as via audio announcements that describe the virtual environment.

There is a growing trend in our workplaces where technology from the consumer markets is finding a home and application. It’s important for us as HR and workplace leaders to make time to understand, consider, and make room for their uses and applications in the businesses that we support.