5 New Rules for the World of Work 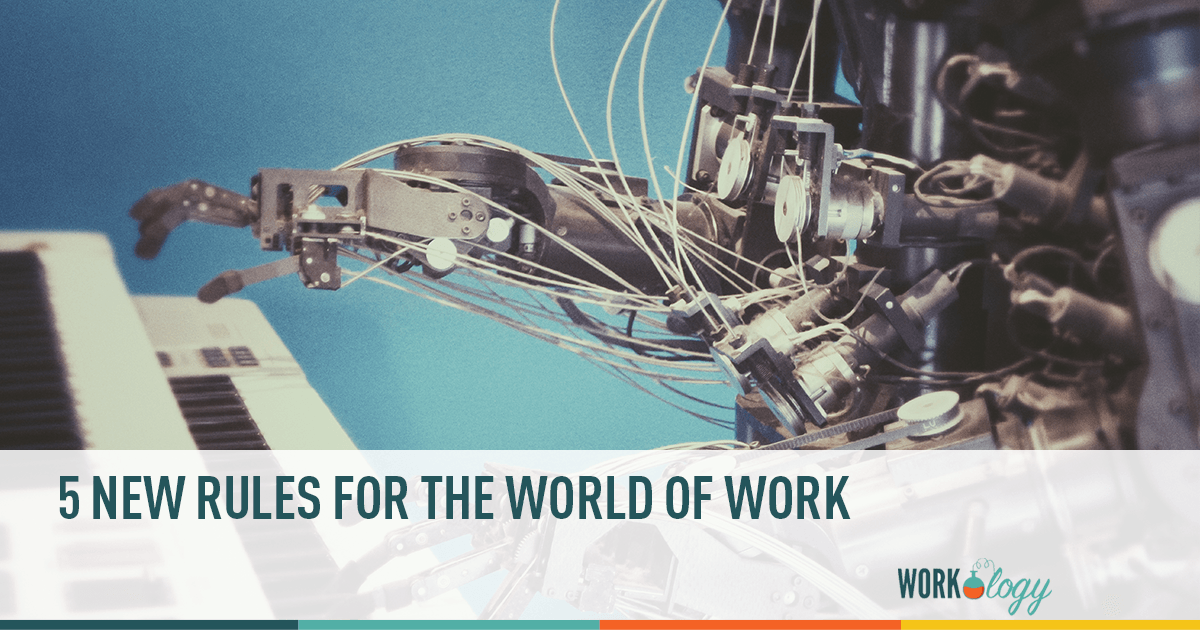 Writer Ross Perlin wrote a fascinating piece in Fast Company that has been shared well over 10,000 times. Called The New Rules of Work, Perlin gives us his take on what work is transforming into. I will go on the record and say that I agree with his assessment and have written about these things many times. However, I thought it might be constructive to review Perlin’s “rules” and provide some assessment of where we are at work and in business today.

5 New Rules for the World of Business

Rule 1: Work can happen wherever

He says the old rule of commuting to a job is over! Perlin says “Rush hour is disappearing.” Listening to my radio in the morning it sure doesn’t sound like it to me, but I am one of those that don’t have to go get into it. There is definitely a rise in people working from home or closer to home. But I don’t think we are anywhere near all the businesses in downtown New York, Chicago, Los Angeles or Atlanta shutting down and having all their workers working remotely. I know of many companies that don’t think their product or service can be delivered by remote workers. So as nice as the idea is of everyone working in their jammies is, it is not going to be a wide spread reality for quite a while, if ever. There are certainly jobs that can be done remotely and they are on the rise, but service jobs just cannot be done in that manner.

According to Perlin the old rule of 9 to 5 (or 8 to 5, or 7 to 3, it is obvious Perlin never worked in manufacturing) is gone. Everyone is now available 24 hours a day, seven days a week. In many jobs that is true. It certainly seems so in HR. However, people are reacting to that, in a negative way. Governments are passing laws to prohibit employers from contacting workers outside of work hours, or are at least enforcing that workers get paid for that time. The US Fair Labor Standards Act is undergoing a revision to require more overtime payment to more workers. France has restrictions on these hours as well. Certainly the ubiquity of smart phones has made it easier to reach employees, but we are in a transition period where people are beginning to push back. Eventually we will accept the possibility of always being “on” but it may yet be a while.

Rule 3: You will go from gig to gig

The old rule was you have full-time job with benefits. Today we are moving toward what is called the “on demand” or gig economy. It is projected that 35% of millennials will work in this arena. However, that still leaves 65% that don’t want to work that way. They want to work for someone else. Yes the “gig” nature of work will expand but it will be a long while before all of us are doing it. By the way, some of us have already been doing this a long time.

Rule 4: The line between work and life is disappearing

The old rule was there was a balance necessary between work and “life”. To my way of thinking the merger of work and life is just life and is actually a return to the way human existence has been for most of the history of people. The task is not to have two spheres it is to have a proper merger of the two into one. Again however, governments are trying to put some clamps on this. You as the individual have this balance in your hands.

Rule 5: You work your “passion” rather than your job

The old rule was you work for money. There is a saying that “do what you love and the money will follow.” All employers would love to have nothing but workers that are passionate for what they do. But let’s face it there are many jobs that it is hard to be passionate about, yet that work has to get done. Perhaps in the future where all the drudge jobs are done by business automation this will work, but for now many people call “bullshit” on working only due to passion.

So there you have the new five rules of work. As we progress through time and amazing technology changes the way work is done we may see these five rules truly come into play. For now we are inching our way in that direction.