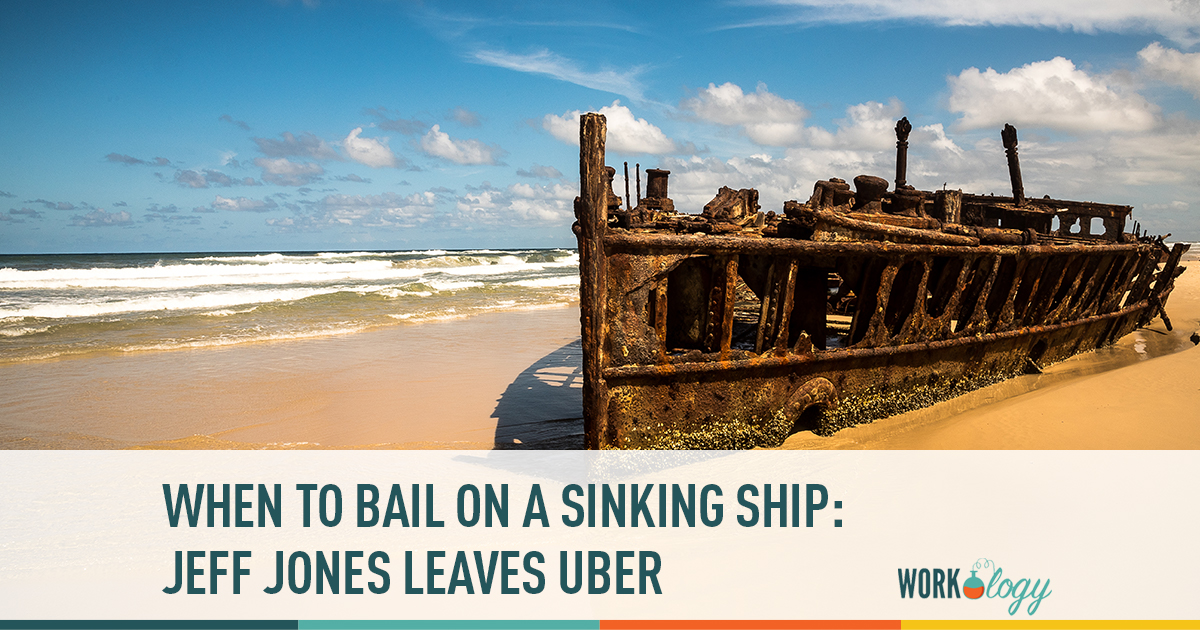 How bad do things have to get before you should bail?

For Uber president Jeff Jones, “how bad” looks pretty bad indeed. Yesterday Recode broke the news that Jones was leaving the company and he wasn’t exactly doing so quietly. In a statement shared with Recode, he made it clear that leaving Uber after only six months wasn’t a case of a bad cultural fit, but something much more. Although he kept things polite and professional, Jones’ discomfort with Uber’s string of scandals and management crises is clear:

It is now clear, however, that the beliefs and approach to leadership that have guided my career are inconsistent with what I saw and experienced at Uber, and I can no longer continue as president of the ride sharing business.

Jones, who has worked as a marketing executive for over a decade at Target, McKinney and Gap, was recruited by Uber CEO Travis Kalanick six months ago to close the gap between the company’s marketing and its operations. The job required a clear understanding of the realities of the product, the workforce, and the regulatory challenges the company faces in many regions, and Jones seems to have tried to get off on the right foot. Recode reports that he held a series of consultations with Uber executives and drivers, but was discomfited by the long since soured relationship as well as the company’s ongoing PR crises.

Since Susan Fowler published her open letter decrying sexism, harassment, retaliation and general irresponsibility at Uber, those crises have ratcheted up. Uber has already lost two top leaders to accusations of sexual misconduct, which are now being investigated, and two more to vaguely worded resignations like Jones’. Today we learned that Brian McClendon, VP of maps and business platform, has also resigned.

These departures should come as no surprise. The longer you stay on a sinking ship, the less likely you are to find a spot on a lifeboat. And while it’s probably too early to write off Uber from a business perspective — #deleteuber has been a fairly successful campaign but we won’t be able to judge its longterm impact for months yet — it’s not too early for employees jump ship. The company’s consumer brand impacts its employer brand which impacts your personal brand — the longer you stay with a tarnished brand, the more likely it is that some will rub off on you.

But even more than that, the longer you stay in a toxic workplace, or one that simply fails to live up to its stated corporate values, the more demoralized will you be by the experience. Susan Fowler and other ex-Uber employees who have confirmed her descriptions of Uber as a hostile workplace for women, will be affected by the harassment and stress they endured there for years to come. Not all workers have the luxury of leaving when things get bad (I’ve been in the position of having to endure a toxic workplace myself, due to financial need) but if you have the option — exercise it, and help others get out too, if you can.

In the case of top executives like Jones, it’s a shame that they didn’t work together earlier on to tackle the problems in Uber’s company culture, but sometimes a ship has more holes than you can plug.