What Can You Do About Election Stress at Work? 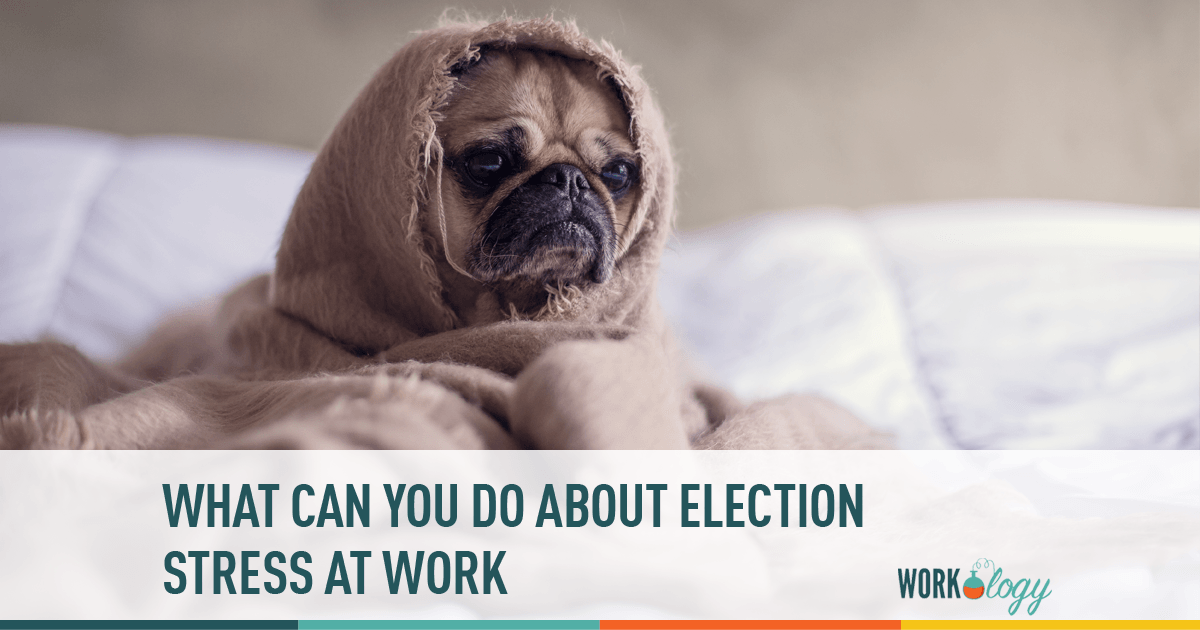 You’re stressed about the US presidential election. See, I didn’t make it a question because I know that you are. We all are. Whether you’re a diehard supporter of the Democrats or Republicans or someone who only pays attention to politics when it’s election season, you’re stressed. Whether you’re an American citizen or working here on a visa, you’re stressed. And it’s not just Americans, either, this contentious and often vicious election is dominating the news cycle all over the world and conversation in the coffee shop, at home and at work.

Just How Stressed Are We?

Both candidates are fond of calling this the most important election of “our lifetimes” and while I’m not sure that’s true, there is a lot at stake next week, for them, for us and for the whole world. From supreme court appointees, to immigration reform, to tax and trade policies, the issues at stake this year will profoundly affect every American and America’s relationship with the world. The tenor of the election too has many people worried, going back as early as the primaries, when Donald Trump started talking about building a wall to keep out “murderers and rapists.” A GOP office was firebombed. Churches have been vandalized. Militias are preparing to respond to a “stolen election.” Hate crimes are being plotted. Will there be violence at the polls or after? I sincerely hope not but I can’t call these fears unfounded. That Trump says he will only accept the result of the election if it wins, and his insistence that the media is “rigging” the election, are only fuelling the fire.

Americans are stressed out about this election — and that stress doesn’t melt away when they report for work. Contentious political discussions are to be expected during election season, even though most workplaces try not to give such conversations much space. Politics in the break room is often as unwelcome as it is at a dinner party, but people talk — and right now they’re talking about the election. According to an American Psychological Association survey 52% of adult Americans find it a “significant source of stress.” That stress is only being exacerbated by the 24 hour news cycle, social media and regular everyday conversations about the election, the APA says. News and social media junkies are being hit worse, as are older and marginalized Americans. Adults with disabilities, for example, report the highest level of election stress.

All that stress isn’t just making people tense and worried — it’s ruining relationships, too. According to a recent Monmouth University poll 70% of Americans say that “this year’s presidential race has brought out the worst in people and most disapprove of the campaign’s harsh rhetoric.” 7% of those surveyed even ended a relationship over the election. The tenor of the campaigns was cited as a key factor, with 70% of respondents saying that its “harsh language” was “unjustified.” That’s a little vague, but let’s read between the lines: 70% percent of Americans are torn up about the way people are talking, never mind the policies at stake. That’s not just confined to how the candidates are talking, of course, but extends to how surrogates, media personalities and even acquaintances on social media are talking.

Social media is such a significant source of stress that some people are ending relationships on it, or altering their use habits. According to a study, published in the Journal of Communication, suggests that during times of political unrest and tension, social media users end relationships. Only 16% of respondents resorted to unfriending, but a much higher percentage considered it, as well as blocking and muting friends and acquaintances. “The study shows that although social network sites are commonly considered a source of connectivity and sharing, they are alarmingly becoming a source of disconnectness and polarization of ideas.”

While my Facebook and Twitter feeds have been full of strong opinions about the election, I’ve also noticed friends and acquaintances going quiet and disappearing. When I checked in with them, they told me that because of the election they were taking a much needed social media break to try to destress. They’re not the only ones. A new PEW poll shows that 37% of Americans are “worn out” by election discussion on social media. 59% of Americans say that social media has become “stressful and frustrating” this election season, and they’re responding to it by blocking, muting, unfriending and even tuning out.

“Nearly one-third of social media users (31%) say they have changed their settings in order to see fewer posts from someone in their feed because of something related to politics, while 27% have blocked or unfriended someone for that reason. Taken together, this amounts to 39% of social media users – and 60% of them indicate that they took this step because someone was posting political content that they found offensive.”

How Can You Destress When There’s a Valid Reason to Be Stressed?

Elections are cause stress because there is so much at stake in them, and because they have a huge impact on discourse in all aspects of society. They’re nigh unavoidable and, well, important. We’re stressed because we should be stressed out about the potentially good and bad outcomes of the election, the scandals and last minute revelations, and how the election has caused behavioural changes in us and those around us. So how do you combat stress when you know that a) you should be worried; and b) there is so little you can do to change the eventual outcome? And what can you possibly do about the creeping dread of election stress in your workplace?

The APA suggests that election stress can be ameliorated by:

That’s all great advice but it’s not all immediately applicable to the workplace. You can, of course, share them with your employees, along with other tips on how to destress. The usual tactics, taking breaks — doing something for yourself, exercise and meditation — will help too, but because election stress is so endemic and because it can have such a toxic affect on the workplace, I think we should all be a little more proactive.

Remove some of the unknowns for you and your employees:

Help to calm things down:

There’s only so much that you or anyone can do about election stress. There is, after all, so much to legitimately be stressed about. But you can help just by letting your employees know that you get it — that you acknowledge their feelings and the gravity of the situation — and by emphasizing that there is one important concrete thing that we can all do: vote.