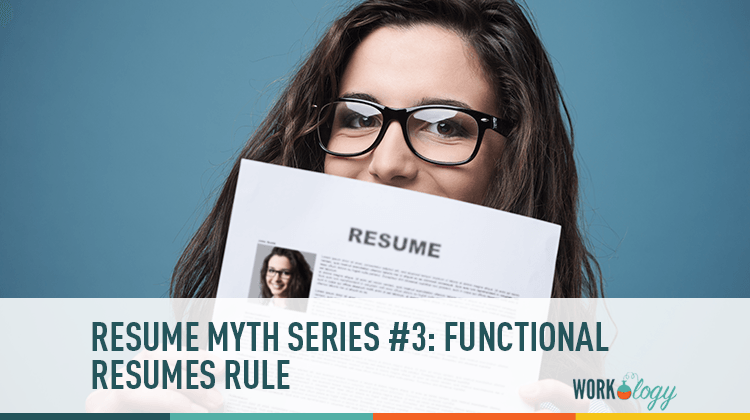 A functional resume is one in which the candidate provides a high-level list of their skills, strengths, and experience. They can even include some very specific achievements over the course of their career. The catch is that the listing of the work history is a footnote to the whole resume, with the dates of employment often being left off entirely.

Why do candidates use functional resumes?

There are a host of reasons why candidates elect to create a functional resume over a chronological resume. Sometimes they simply don’t like the look of the chronological resumes they have seen. Other times they’ve seen a sample of a functional resume they think looks nice, so they try to duplicate it. Some candidates may be going for a position that matches up with a job they held years ago, so they want to bring that experience to the fore. In addition, some job seekers have a concern about the number of jobs they’ve held (i.e., too much job hopping for whatever reason) or about a gap in employment.

What’s the problem with the functional resume?

So the issue here is not that functional resumes are a bad idea overall. The core issue has to do with your audience and their needs, wants, and expectations. Over the years, they’ve seen to many candidates come across their desk that use the functional resume to hide some serious “warts.” As a result, the initial impression that most recruiters, HR reps, and hiring managers have when seeing a functional resume is “what’s this candidate trying to hide?”. Obviously, this is not the signal a candidate wants to send to the decision maker.

Is a chronological resume the only alternative?

This brings us back to the chronological resume for most candidates (say 98%). Put simply, employers want to see your experience and achievements in context chronologically, so a chronological resume is the best option here. However, you can certainly adopt some of the principles from a functional resume into the chronological format. Providing a list of high-level functional skills that are relevant to the opportunity, along with some supporting content, in a brief summary section that takes up half of a page or less at the top of the resume is a good approach. If you’ve got some of those warts to cover over or issues to address, such as a return to an industry to which you used to belong, then putting together a killer cover letter is going to be very important as well.

What kind of resume do you think works best?