"Millions to Earn More in Overtime!": Facts and Fiction of the New FLSA Final Rule 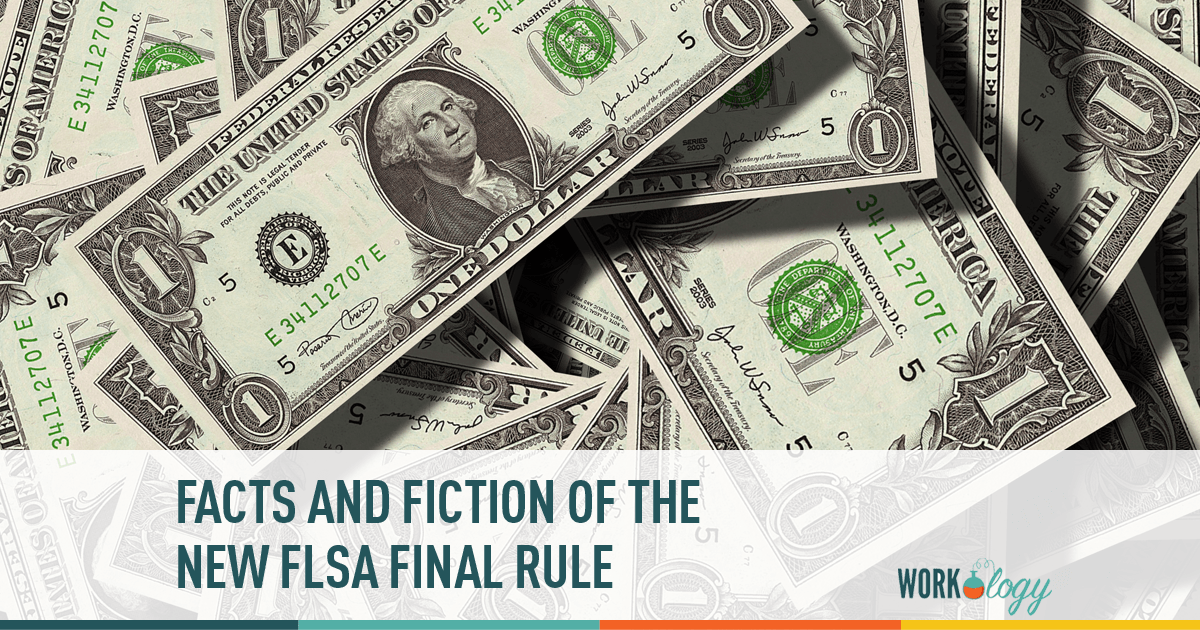 Facts and Fiction of the New FLSA Final Rule

That is what the newspaper headline read on the front page of the morning paper. Yes, as many of you are aware the Department of Labor has finally released the final regulations regarding the new wage standard for exempt level employees. There was both good news and bad news in the notice published by the Department of Labor.

In July of 2015 the Wage and Hour division of the USDOL published proposed regulatory changes over the definition of who could or could not be an exempt employee. An exempt employee is by definition an employee who is exempt from being paid overtime. That means that an exempt employee can work as many hours as is necessary without earning any more money other than their stated salary. In the proposed regulation the figure that was stated was going to be $970 per week, or $50,440, since it was to be indexed at the 40% of the weekly earnings of all salaried employees in the United States. That level shook a great deal of people up since the current level is $455 per week of $23,660. There were also rumors that the duties test was going to be changed and made more stringent. The duties test is what you look at to determine if someone is meeting the work standards it takes to be an exempt employee.

This is the good news part of this post. This new regulation only affects the Executive, Administrative and Professional exemptions. The new level to qualify to be an exempt employee is $913 per week or $47,476 per year which is better than $50,440. They ended up basing this on wages in the South.

Unexpectedly they announced it will not be adjusted annually, as originally anticipated, but every three years, though this could be problematic, as I will discuss later. The new regulation does allow you to count bonuses and commissions, for up to 10%, to go toward meeting the threshold if these bonuses are paid at least on a quarterly basis.

More good news came with the announcement that NO change is being made in the “duties” test. We are not going to be forced to go to the California model of percent of time spent performing duties.

Even better news was that the effective date on this does not occur until December 1, 2016 as opposed to the July 2016 date that was expected by many. Everyone will have ample time to prepare for the necessary changes.

The bad news is that this change will still have the following impacts:

What Needs to Be Done

First, this would be a good time to review whether or not people you have classified as exempt are really exempt. Too many employers make the mistake of improperly classifying employees as exempt solely on the basis of the fact that they pay them a salary. Salary is a method of wage payment not a classification of overtime eligibility. There are numerous companies that have people classified as non-exempt yet they pay them a salary. Non-exempt employees do not have to be exclusively hourly employees. So even if you have an employee who is going to make the $47,476 salary level they may not be properly classified based on the nature of the duties required to be classified as exempt. This is not as easy as saying “they make decisions” as one writer claimed.

By the way, titles don’t count. It is all based on the job description and the actual duties performed. If you have not updated your job descriptions lately then you may want to do so by having an incumbent participate in the process.

Here are the preparation steps that need to occur:

Tracking time accurately of newly re-classified employees will also be important. You can do it old school using paper time sheets or you can do it using new technology, even including mobile devices. The important consideration is finding something your employees will adapt to most easily.

As you can imagine plaintiff’s attorneys’ eyes have lighted up with dollar signs. Because this has so widely been publicized you may have problems with, according to Seyfarth Shaw:

It is unlikely this will be overturned even if a new administration comes in place in January. Congressional reversals this year would have to be signed by the President and that is NOT happening. Perhaps future Congresses or Administrations may alter the updates done every three years, but that remains to be seen.

So prepare to make the appropriate changes and plan on the economic impact it may have for your organization. DO NOT SIT ON YOUR HEELS.