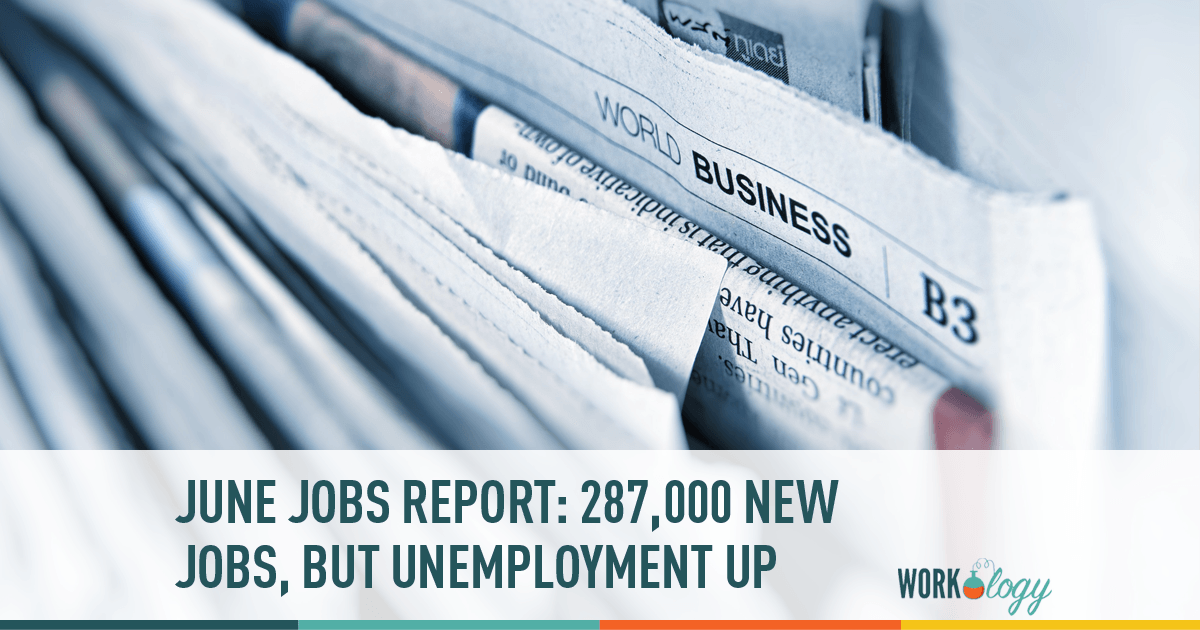 After a shocking May jobs report, economists, employment experts and market analysts were eagerly awaiting the June numbers, delayed a week due to the July 4th holiday. This is the first BLS jobs report to come out after the Brexit vote sent markets into a panic, though its data was gathered during the lead up to the vote. And although American firms don’t hire and fire based on UK politics, the increasing reliance on nonfarm payroll hiring numbers as an economic market, made many analysts argue that this June BLS report would be an important signal as to how the US economy is faring and what impact it would have on a shaken global economy.

Well the numbers are in and they’re positive — sort of. The US economy added 287,000 nonfarm payroll jobs in June and average hourly wages rose by %0.02 to $25.61. The unemployment rate, though, ticked up to 4.9%, up 0.2% since last month. Leisure and hospitality saw big growth in June, adding 59,000 jobs, reversing May’s surprising lack of seasonal hiring.

However, BLS also released revised numbers for May, downgrading its original assessment of nonfarm payroll jobs added to 11,000. It revised its April numbers from 123,000 to 144,000 jobs added. Keep in mind that June’s 287,000 could be revised in time for the July report, either up or down. Too, the average job growth for the last three months is a less sunny 147,000 — and that’s before considering the revised June numbers we’ll see next Jobs Friday.

The big change in this month’s jobs report was growth in leisure and hospitality. Health care, information and the service sectors have had consistently strong numbers, and mining has been steadily declining, losing 214,00 jobs since September 2014. The jump in leisure and hospitality hiring is especially encouraging because we expected to see the start of that seasonal uptick in May.

Although the economy added 287,000 jobs in June, the unemployed population rose by 347,000. That increase may have been due to an increase in short term unemployment due to more people doing temp or casual work. However, BLS noted that the number of involuntarily part time workers went down in June.

As always, I caution you not to take these numbers too much to heart. We won’t have revised June figures until the start of August and it’s only then, when we can put these numbers properly into context, that we’ll really have the full picture.