If the Culture Doesn’t Fit, You Shouldn’t Commit 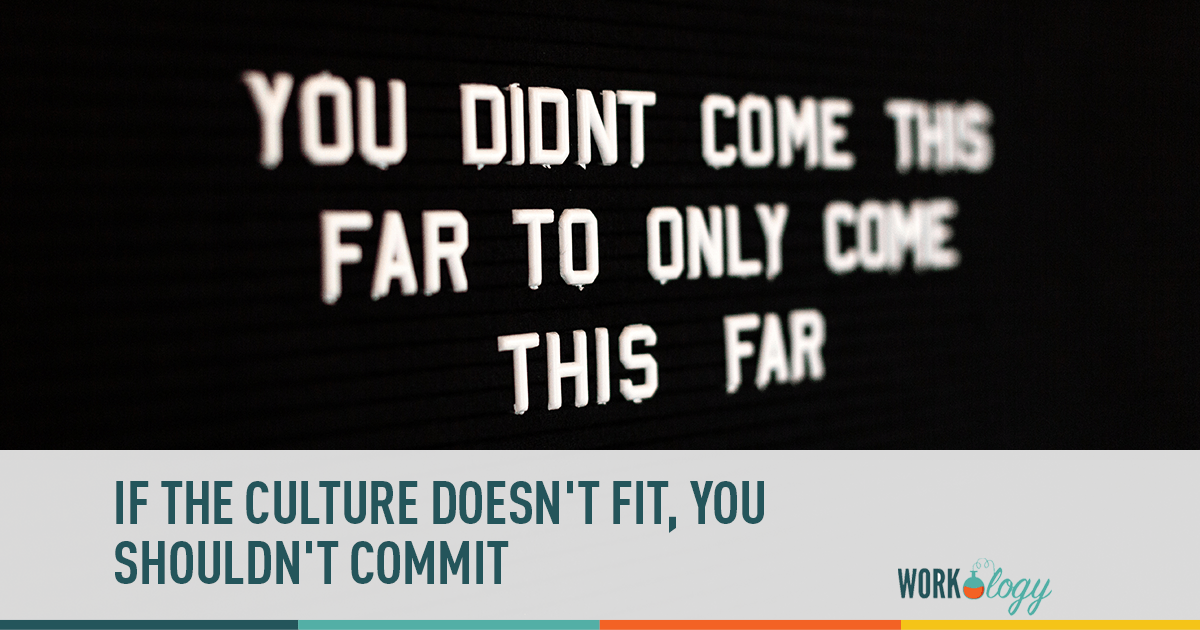 Everything and everyone told me NOT to accept the offer.  One friend and previous employee of the company called to caution that I wouldn’t fit in there. Another friend called with a message from a recent escapee telling me that I was better off unemployed than working for those, and I quote, “bunch of bitches”.  I tucked the warnings away and decided that, if offered the position it would only be for a short time period until I could find something better. After all, I had two weeks before my current contract position ended and Christmas was right around the corner.

The phone screen with the hiring manager went so well that I started to give the opportunity some serious consideration.  Maybe my experience with the B.O.Bs would be different from that of the seemingly disgruntled former employees. So I pressed on to the final step in the pre-offer process…meeting with the “Queen B”. They were “nice” enough to schedule my face to face interview at the butt-crack-of-dawn so that I could still make it to my current job at a reasonable time.   Too bad the interview started 45 minutes late and the Queen didn’t even bother to talk to me.  She did pop her head in the interview room to summon her minion though.

During the year I joined the organization, the Turnover Rate for Talent Acquisition held steady at an alarming 100%.  A select few lasted a year or more but the majority of recruiters only survived a few months to a year before calling it quits.  One of my coworkers had  a personal policy to not even speak to a new hire until they had worked at least 3 months. At “Going Away Happy Hours” the recently departed would welcome the newest member into the Escaped to Greener Pastures Club. Those of us who were still current employees who be met with pep talks to hang in there, or get out before you’er sucked in too deep. Stories were shared about how various people left the organization in a blaze of glory in an effort to get the rest of us to leave the dark side as well.

The one who made a phone call, left for “lunch” and never returned.

The one who burned sage in the office to expel the “evil forces” then quit when it didn’t work.

The one who packed their personal belongings and left their badge in their workspace after everyone left the office.

During a skip level meeting, the HR Leader compared us to factory workers and thought it was a compliment.  In his defense, we were churning and burning offers, getting those butts in seats. Nothing against factory workers, but I didn’t sign up to work on an assembly line doing mind-numbing repetitive tasks…except, that’s exactly what I did. There was no respect for the TA function as a whole. We were viewed as paper pushers, weren’t strategically aligned to the business, and the scapegoat for all that was wrong in the organization as a whole.

I was determined not to assimilate into the culture where it was hard to see where an individual or a team added value. Where employees were berated and scorned publicly. Where you were to do what you were commanded and not ask questions or offer suggestions on improvements.  Poor leadership stifled progress and made being at work sometimes unbearable.

Our internal customers were so used to poor service that when I did something I thought was small, like actually call a candidate, partner with hiring managers, or take responsibility for a and execute on items that were part of the TA process it was like I had cured a disease.  I was used to an environment where “Be Remarkable” was the motto, the expectation and the norm. Where employees were acknowledged, rewarded, and sincerely appreciated.  It was because this culture was so engrained to into my psyche that I was able to build trust and relationships with coworkers in and outside of my immediate group.  Some of them grew to be close friends, mentors, mentees, and voices of reason.

The personality, values and behaviors demonstrated by the Talent Acquisition Organization were in direct conflict with everything I sought in an employer.  If hindsight is 20/20 then foresight is 20/10…even better.  Had I focused less on the anxiety and desperation brought on by impending temporary unemployment situation, I could have saved myself a lot of heartache and disappointment.  For anyone that is facing a similar situation I offer these lessons learned.