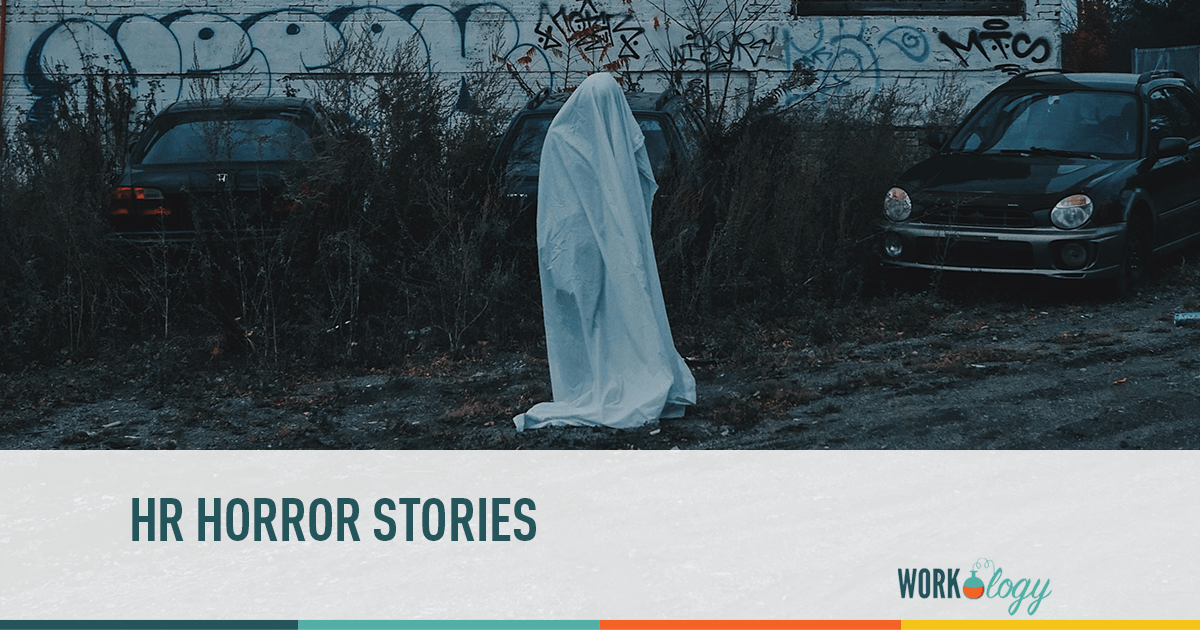 Halloween is right around the corner, so it is the perfect time of year for scary stories. I usually write about HR and advice for improving your workplace, but in honor of the my favorite holiday, I want to look at some of the more unusual and, yes, scary stories I have come across working in HR. Be sure to share your own stories in the comments below.

Attack of the Inappropriate Internet Usage

It still amazes me when people engage in bad workplace behavior online. Email and Internet browsing often leave a trail that is very hard to permanently delete. Early in my HR career, I worked with a manager to discipline an employee who had a bad habit of looking at pornographic websites while at work on the night shift. He was caught because he visited a site that ended up installing malware on the computer he was using, and IT was able to trace it back to the website. The employee was warned that visiting such sites was a violation of company policy and could cost him his job.

Well, he did it again and on a computer that was used by another employee on the day shift. When the day shift employee logged in the next day, all kinds of pornographic images popped up, and IT was once again easily able to trace the problem back to the same employee because it was all under his login. Needless to say, the employee was fired.

In another incident, a email with an attached video was making the rounds among employees. The video had a rather mundane title; however, when the recipient clicked on the video, they were greeted with a very sexual image. Some employees thought it was funny, so they forwarded it to coworkers. By the time HR got word of what was going on, we had an easy job figuring out who to write up because most people who forwarded the email did not think to delete the long list of people who had forwarded the email before them.

Here’s the moral of these stories: never engage in questionable browsing and emailing at work. Never. Just don’t do it.

If you ask most HR people about the worst workplace behavior they have handled, it usually involves something relating to the bathroom. I have heard dreadful tales of people using the hallway as a toilet and all kinds of variations on messy bathroom habits. At one place I worked, we never did catch the person who would relieve herself on the floor of the women’s bathroom and then conveniently cover it up with a newspaper. I’m still not sure what the purpose of that was.

Perhaps the most disturbing bathroom behavior I have encountered in my HR career involved cell phone cameras and the men’s bathroom. After a supervisor started investigating to figure out why there small wads of toilet paper all over the bathroom floor, he learned that male employees were shoving toilet paper in the cracks between the stall doors and walls to prevent co-workers from taking pictures while they were in the stall. Some employees thought it was funny to take such pictures through the small gaps in stalls and then text them to others to embarrass their coworkers.

The hardest part of the investigation was that we could not get anyone to admit who was taking the pictures. We ended up meeting with employees and put them on notice that we were aware of the pictures and that anyone caught engaging in such behavior would be fired. Fortunately, that seemed to stop the problem.

Revenge of the Horrible Interview

Interviews provide no shortage of strange stories. I one time had a candidate stare at me while he licked his cell phone suggestively as I went over the benefits the company offered. Needless to say, he did not get the job. But one of the creepiest interviews was a candidate who seemed to have crawled out of some remote mountain cabin to interact with people for the first time in months.

We had been doing a hiring event where we posted ads saying that everyone who showed up with a completed application would get an interview. I knew I was in for an interesting interview when they HR assistant walked into my office with her eyes wide and ushering in the next candidate—a middle-aged man with a scraggly white beard and only a few teeth. As she went to walk back to her desk, the candidate said, “Thanks, sweetie. You’re a real doll, and I’d love to take you for a ride in my truck sometime.”

Upon seeing the look of confusion on my face, the man said, “Don’t worry, beautiful! You can go for a ride too. I love to have pretty ladies in my truck.” Rather than make a big scene of ushering the man out of my office and ending the interview before it started, I asked the man a few questions about his work history, which involved answers explaining that all the people who fired him were idiots. When I finally ended the interview and told him we would be in touch, he once again invited the HR assistant and I for a ride in his truck. Of course, we both turned down the offer and hoped the candidate would never come back again.

What are your HR horror stories? Share them in the comments.