Ep 236 – ADA Anniversary: What Does the Future Look Like 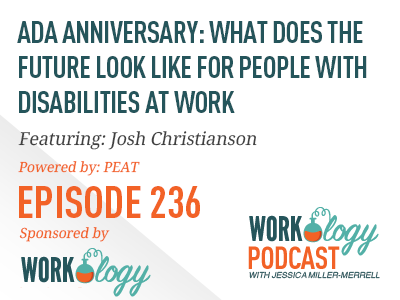 This month marks the thirtieth anniversary of the Americans with Disabilities Act. The ADA was the world’s first comprehensive declaration of equality for people with disabilities. It was a collaborative effort of Democrats, Republicans, the legislative and the executive branches, federal and state agencies, and people with and without disabilities.
President Bush signed the Americans with Disabilities Act into law on the White House Lawn July 26, 2020. It was the world’s first comprehensive civil rights law for people with disabilities. The signing represented an historical benchmark and a milestone in America’s commitment to full and equal opportunity for all of its citizens.

This podcast episode takes a look at bold predictions for what the next thirty years has in store for the workplace and its technology for people with disabilities.
This episode of the Workology Podcast is part of our Future of Work series powered by PEAT, the Partnership on Employment & Accessible Technology. In honor of the upcoming 30th anniversary of the Americans with Disabilities Act this July, we’re investigating what the next 30 years will look like for people with disabilities at work, and the potential of emerging technologies to make workplaces more inclusive and accessible.

Episode 234: ADA Anniversary: What Does the Future Look Like for People with Disabilities at Work with Josh Christianson (@ethos_josh)

Today for this special episode, I’m joined by Josh Christianson, Co-Director, Partnership on Employment & Accessible Technology. Welcome to the Workology Podcast. In this special episode, we are spotlighting four of our past interviews looking at what the future will look like when it comes to technology for people with disabilities at work.

“I think XR will have an impact, big impact. But I honestly feel like technology, like XR, coupled with tech, like artificial intelligence and robotics, will probably have the biggest impact, at least from what we have seen now.”Joel Ward

“I really think that these tools that claim to make hiring decisions more seamless and frictionless for you are actually creating a tremendous legal liability and having a chilling effect on diversity inclusion. So I would recommend against using them in their current form. And if you think that they have a future, engage really strongly with vendors to explore how their A.I. models are redefining existing biases and the culture.” – Chancey Fleet

Alex Givens: Ep 222 – Protecting People with Disabilities Against Discrimination with AI in Employment

“When we start thinking about remote technologies, it really should and can be improving workplace opportunities as well. There’s a clear shift in workplace culture, a more open understanding now about teleworking and flexible schedules. And in my mind, that is all for the good and can be really enormously helpful, the more that we make those opportunities available for people. I will say that that’s good stuff. I do still think there’s a lot to be done, right. The unemployment rate for workers with disabilities is still more than twice that of non-disabled workers. And anybody who cares or thinks about this space needs to own that and think about our roles in trying to transform that reality. We have these massive systemic problems that technology is just not going to fix.” – Alex Givens

“I will say that I think that we’re seeing is already becoming a trend with a lot of potential is machine learning and augmented reality or smart glasses. I know we’re all aware of the big snafu of the Google glasses from years of yore. And there are a lot of people who speculate as to why they didn’t really take on the way that they did. But what we’re seeing now is with machine learning, we can actually, essentially use the tools around us to teach in real time.” – Chris Baumgart

George Karalis: Ep 228 – The Value of VR for Training and Employee Development

“There’s a few things I would say about immersive technology and the Future of Work. So first, there’s the hiring process. We know that your performance in a job interview is often not a good predictor of how you’ll actually do on the job. So I hope that in the future we’ll use immersive technology and also AI for skills assessments in simulated work environments that will ultimately result in better and more equitable hiring practices.” – George Karalis

I see in the next 30 years around digital inclusion and universal design and creating tools that allow people to engage is kind of a microcosm or laboratory for how we as a society can do that. -Josh Christianson Click To Tweet

This July is the 30th year anniversary of the signing of the Americans with Disabilities Act. You can follow along online on Twitter with the hashtags #ADAnext30 and #ADA30. I’ll be linking to each of these podcast interviews in the podcast transcript along with some recommended resources for you on ADA 30. Thank you to Josh Christensen for joining us as my guest host of this special ADA 30 episode as we look back and look forward at the next thirty years.

Thank you for joining the Workology Podcast sponsored by Workology. This podcast is for the disruptive workplace leader who’s tired of the status quo. This is Jessica Miller-Merrell. Until next time, visit Workology.com to listen to all our episodes of the Workology podcast.

Connect with Josh Christianson on LinkedIn.